Navy Federal Credit Union is a $54 billion credit union that’s been serving the armed forces and their families for over 80 years,  the largest in the world. So they’re a big gun in the financial world, but how are they doing in social media? Does their size and clout translate to social channels?

Navy FCU is ranked #12 among all financial institutions worldwide in The Financial Brand’s “Power 100” social media database. They are ranked #1 among all credit unions for both number of Facebook ‘Likes’ and number of Twitter followers.

Navy FCU seems to have two strategic objectives. They want to make being a member of Navy Federal feel like something special, and they also want to be seen as approachable and interactive with members. The credit union has an exclusive connection to the Navy, and they effectively use social channels to demonstrate that connection. There are frequent mentions of the Navy and other military topics in their content streams.

Most notably, they are trying to connect with their members every way they can. As an example, Navy Federal allows people to post directly to their Facebook wall and they respond almost immediately to most posts. A large amount of their posts feature pictures of members. The credit union actively solicits pictures of members having fun, helping build a more connected community.

On Twitter, most of their tweets are actually replies to- or retweets of things that members have done or said. Once again, it seems Navy Fed’s strategy is about celebrating their members.

YouTube is the one wrinkle in Navy FCU’s social strategy. It’s basically a channel for little more than their commercials. It seems that an opportunity is being missed here, to get some video submissions from members. I think it’s a pretty positive strategy that can be amplified, especially for a credit union based around a military organization where there is already a sense of belonging. Navy Federal doesn’t *have* to work that hard to engage their customers but they do and it’s awesome. 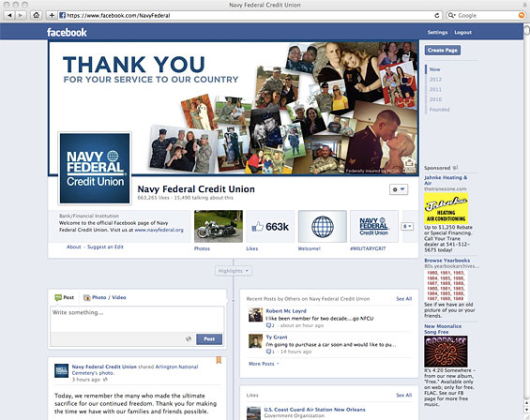 This category is a bit tougher because Navy Fed has so much user-submitted content, it’s difficult to judge them harshly on their overall quality. As a general rule, user-submitted content doesn’t have the same quality standards as internally-generated material, because the engagement and interaction more than makes up for it. Navy Federal does do a very nice job polishing up their user-generated content though.

On Facebook, they have many military and patriotic-themed posts, with some featuring their own employees. These stand out as being nicely done.

On Twitter, Navy Federal has a lot of re-tweeting and replying, but the posts they originate are pretty generic and feel like filler. Not surprisingly, many of these posts are financially oriented but there is no significant use of #hashtags and no compelling writing. In fact, you could probably get the same content by just plugging the appropriate RSS feed into your stream.

The content quality on Navy Fed’s YouTube page is really good, however. Navy Federal put up commercials that are designed for TV, so they are creative and interesting. However, the credit union hasn’t posted anything new in six months and keeping a steady stream of content going matters. 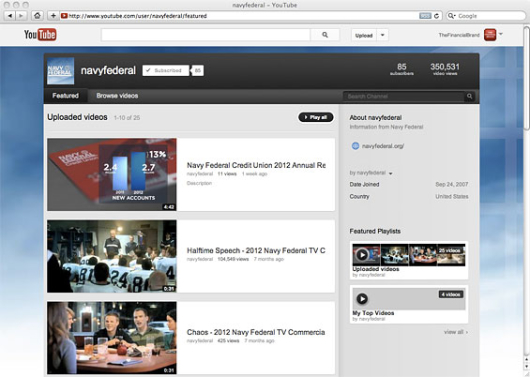 Navy FCU’s YouTube Channel – They haven’t upgraded this channel to YouTube’s new look and feel yet; they’ll be forced into an upgrade in just a few days. And there are some opportunities to cross-link other social channels (in the upper-right sidebar of their profile) that they aren’t currently utilizing.

This is where Navy FCU really rocks some awesome! Wow, do they do a great job of audience engagement!

This is clearly where their strategy lies. Not only does Navy Federal actively foster audience engagement by running promotions asking for pictures, responses and replies, but they encourage it implicitly by the way they respond to almost everybody’s posts, questions pictures, tweets, etc.

On Facebook Navy Fed fields everything from service questions to customer complaints, and they deserve some extra credit for leaving unflattering messages posted to their wall. (Let that be a lesson to you: show the world how you handle the unhappy customers too, it matters as much or more than how you handle the happy ones.) On Twitter, Navy Federal again responds to their members, but they also retweet and redistribute member messages.

The exception in Navy’s engagement strategy is again with YouTube. Navy FCU isn’t really engaging with its commenters on YouTube, nor is the credit union promoting any ongoing message or outreach in its YouTube channel. Because they don’t post very often on YouTube, audience engagement is going to be challenging.

Ultimately Navy Federal is doing a good job of communicating with their members, and you can see that on every post — not only the ones that the credit union posts, but also in the ones that their members post. There are a lot of responses and engagement on their very active Facebook page and Twitter feed. 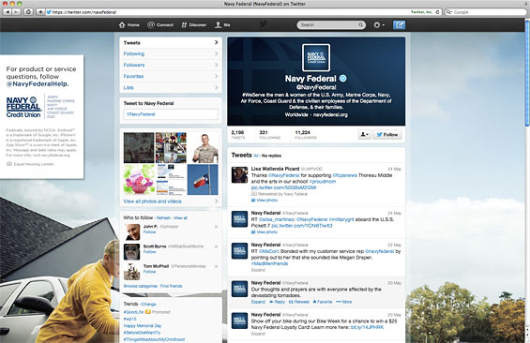 Here’s how this category works: After reading a post or a tweet, how likely is someone to say, “Holy Smokes!

So, how is Navy Federal doing with the “Holy Smokes!” factor?

Looking at their Facebook page, it’s easy to say, “Holy Smokes do they encourage their customers to engage!” but that’s not really what this category is about. It’s about content that makes you say, “Holy Smokes, that was [something]!” — it makes you want to engage deeper.

On their Facebook page, amidst the people happy to have received a loan, frustrated with their ATM experience, and showing off their biggest catch, there is one notable undercurrent: Navy Federal is about belonging, and about family. They understand that all of their members know what it is to miss a family member because of military service. Take this post from April:

Unfortunately, there is nothing “holy smokes” about their Twitter content at all. It feels like a real missed opportunity, and an area for improvement. Their YouTube commercials are professional and compelling, but the credit union can only lean on old content for so long.

All in all, Navy FCU has a good, strong, solid approach to social media, particularly on Facebook. They have the most challenging aspect of social media down pat — audience engagement — and that’s huge! Navy Fed makes their members feel special which is not always easy to do. We salute you, Navy Federal Credit Union!