That’s what NAB, one of Australia’s four biggest banks, did to its rivals Commonwealth, ANZ and Westpac. Using an elaborate mix of marketing media, NAB announced that it would be “breaking up” with its competitors.

The day after Valentine’s Day, NAB delivered an open letter to competitors that reads like a Dear John letter. NAB said it had “moved on” by abolishing fees, offering better interest rates, improving access to ATMs, and supporting local businesses when other banks wouldn’t. 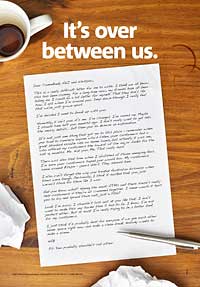 The lengthy “break up” letter was published in every major newspaper. NAB also hung an enlarged copy of the letter — some three stories tall — on the side of its headquarters.

Central to the campaign, NAB is promising to pay customer fees if they switch mortgages from Commonwealth or Westpac.

NAB’s ”break-up” campaign encompasses an elaborate mix of marketing media including a series of newspaper ads, YouTube videos, street teams stunts, chalk drawings on sidewalks, banners strung from helicopters, guerilla tweets, a special website and light projections on the side of buildings.

NAB really went nuts with this campaign. For instance, they hired police to escort a piano man to the headquarters of competitor ANZ, where he proceeded to play “break-up” love songs outside the building. 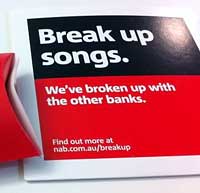 NAB sent employee street teams to circulate outside branches of Commonwealth, Westpac and ANZ where customers were handed tissues and CDs full of “break-up” songs.

And for the kickoff on Valentine’s, NAB sent 60 couples out to restaurants, trains and various public landmarks across Australia. The “couples” — played by actors — engaged in intricate (and potentially uncomfortable) “break up” skits, with one actor playing the part of NAB and the other — the one getting dumped – was another bank.

All these guerilla tactics generated exponential PR returns for NAB. Google lists some 460 news articles about the campaign, plus countless other blog posts.

NAB used chalk to spread its message on city streets.

NAB created a special subsite for the campaign, where you can watch some hilarious video parodies of NAB really sticking it to peers. In total, NAB’s videos have been viewed over 285,000 on YouTube. 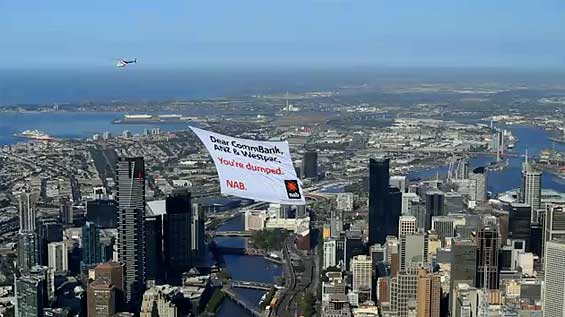 NAB USES CHOPPER TO TAUNT RIVALS
They flew this banner outside the headquarter offices of Commonwealth, ANZ and Westpac. 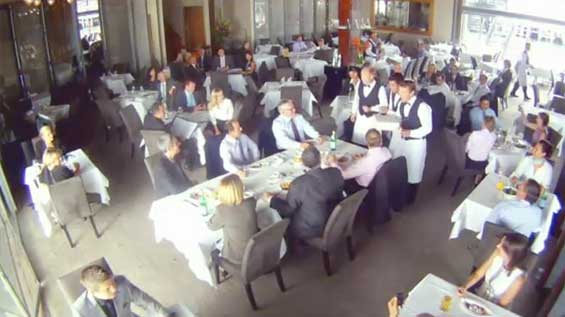 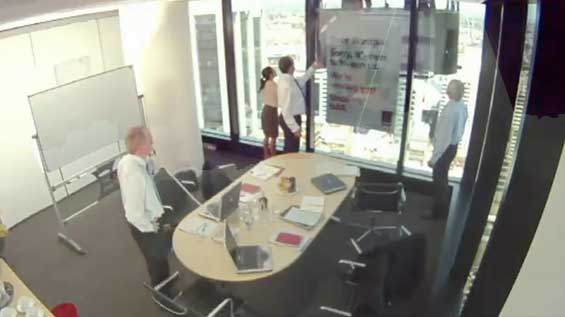 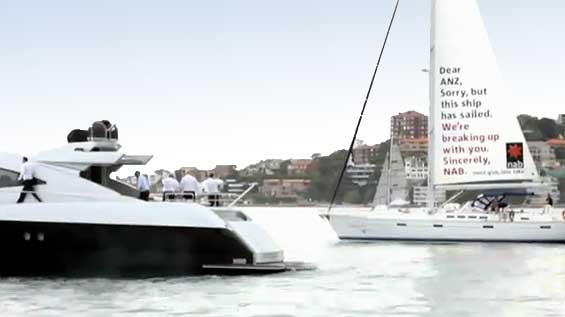 NAB SNEAKS UP ON YACHT FULL OF ANZ BANKERS
“We visited some unsuspecting ANZ execs having a lunchtime cruise on their yacht,” NAB said.
“They weren’t too happy about it. Well tough noogies.”

The bizarre message was retweeted by hundreds of other Twitter users, most of whom assumed one of the NAB’s employees had slipped up and accidentally sent a personal tweet from the bank’s account. Not the case. It was a actually a sophisticated PR ploy to get people following NAB on Twitter, a ruse that was revealed in a press release and subsequent tweets about the bank’s “break-up” campaign.

Westpac, an competitor of NAB, was one of those who fell for the bait. They glibly chimed in with their own tweet:

In its tweet, Westpac was alluding to an incident back in early 2010 when a member of Westpac’s social media team accidental tweeted, “Oh so very over it today.”

Tim Burrowes, writing for Mumbrella, praised NAB for the Twitter trick. “Punking Westpac into promoting the offer — sheer brilliance,” he said. “What is also impressive is that NAB was willing to take a risk.”

According to Burrowes, the Twitter ruse was the brainchild of NAB’s own social media team rather than any of its agencies. For other parts of the campaign, however, the bank relied on agency partner Clemenger BBDO.

On Valentine’s Day, NAB’s Twitter account linked to a video featuring dating columnist Zoe Foster, explaining how couples tended to re-evaluate the merit of staying in an unhappy relationship come Valentine’s Day. The video ended by saying re-appraising unsatisfactory relationships with banks shouldn’t be any different.

Not more than a week after NAB debuted its “break-up” campaign, competitors Commonwealth and Westpac responded with home loan offers of their own. Commonwealth is offering $1,200 to NAB customers who refinance their mortgages, plus another $100 if they switch credit card accounts. Westpac’s offer is more modest: $700 in refinance fees.

In what has shaped up to be a full-fledged Aussie-style banking war, NAB would appear to have its rivals right where they want them. Whenever the competition reacts to your moves, it positions you the market leader. You lead, they follow.

Westpac downplayed the situation, denying that its offer was in direct response to NAB. Commonwealth, however, took the campaign head on. In an email to staff, Commonwealth’s head of retail banking attacked NAB, saying it would directly target NAB’s customers and compete with its rival on price.

“If they want to play games with price — the only lever available to them — I’m happy to compete to retain customers,” he wrote.

According to the Herald Sun, Commonwealth has about one-third of the Australian mortgage market, slightly ahead of Westpac, with NAB and ANZ each claiming about 18%.

NAB CEO had concerns about the campaign

NAB’s CEO, Cameron Clyne, told The Australian that he had three fears about the campaign prior to launching it. The first was that competitors would have no reaction at all.

“The second concern was that one of our competitors would move to our position, lowering (mortgage) rates and cutting fees for all of their customers, not just their existing customers,” Clyne said. “Because then we’d have no point of differentiation.”

“The third move that concerned us was a wholesale acquisition strategy, with deals being offered to all bank customers,” Clyne added.

“The thing that really gets on my nerves is this nonsense that NAB is destroying industry profitability,” Clyne said.

According to a report in the Wall Street Journal, all four of Australia’s big banks — Commonwealth, NAB, ANZ and Westpac — are on track for multi-billion profits in 2011.

Christopher Zinn, a spokesman with a consumer advocacy group, warned that NAB’s campaign drawing so much attention to cultural changes might invite an uncomfortable level of scrutiny.

“It’s very easy to say but it’s actually an incredibly hard thing to do and execute,” Zinn told The Age. “And that’s the real risk they take in saying we’ve changed but not being able to convince people that that’s the case.”