GT Bank has rolled out a new Facebook app that allows prospective customers to open new accounts and immediately get their account numbers. Is this the wave of the future?

Any Nigerian that wants to open a new bank account can now do so on Facebook. Well… sort of. They can at least get the process started on Facebook.

To open a new account with GT Bank’s new Facebook app, all users have to do is complete a remarkably simply three-question form. Tell them which type of account you want, give them your email address and specify which state you’re from, and you will be issued an “account number” instantly.

The rest of the process is pretty much like opening an account at any other institution anywhere else in the world. You’ve got to gather up your most recent power bill, your driver’s license and two passport photos (who doesn’t have a couple of those just laying around?), then trudge all that stuff down to the customer service desk at one of GT’s branch locations. Oh, and don’t forget to printout your “transaction code” that the Facebook app generates as a confirmation, which apparently is only good for two weeks.

Reality Check: It doesn’t seem like the system actually opens a new account, nor does it seem there’s any significant interface to the bank’s core banking system. If anything, it appears that the Facebook “account opening” app does little more than reserve an account number (perhaps only temporarily) for people.

Existing GTBank customers that want to open additional accounts can log into the online banking platform and add their new accounts there.

Note: GT Bank has responded with an email clarifying how their Facebook Account Opening system works. You can read it on here on page two.) 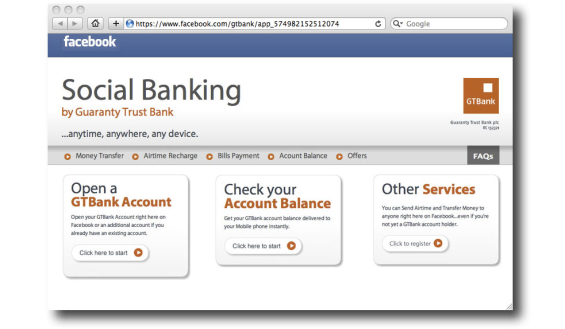 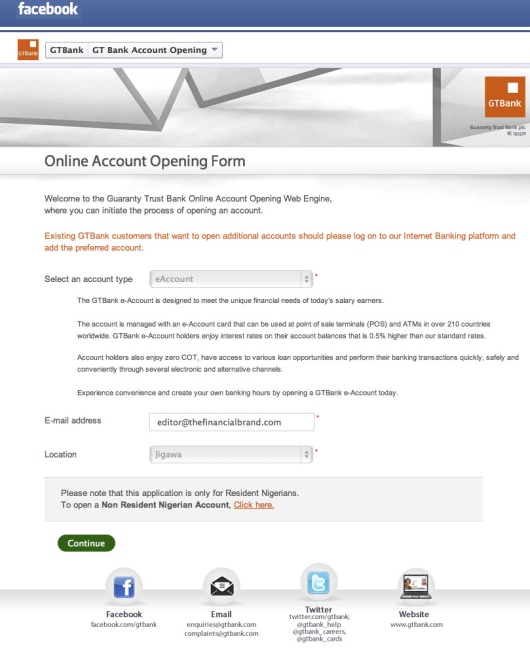 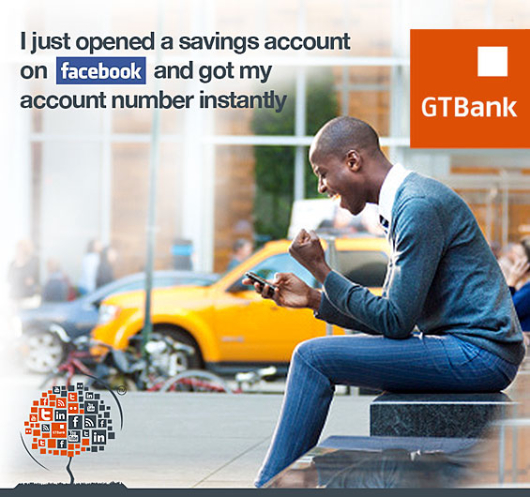 GT was among the first banks in Africa to use social media, and presently has over 1.3 million Facebook fans — more than any other on the continent. GT ranks #6 on The Financial Brand’s ranking of banks with the most Facebook ‘Likes.’ They added a whopping 194,568 fans in the Q2 2013, up 18.6%.

The bank is also very active on Twitter, with 59,332 followers and 12,077 tweets sent, putting them at #5 on The Financial Brand’s list of top institutions. They even have 52,277 people in their Google+ circle, among the highest in banking anywhere worldwide (if not the outright most).

Social Banking is only the latest in a series of tech-heavy innovations GT has rolled out lately. The bank’s other recent introductions include GTBank Mobile Money, an app that allows anyone — customers and non — perform transfers and payments from their mobile phones, the GTCrea8 eSavers virtual account for undergraduates, and the GTBank e-Account.

Facebook probably won’t become a primary gateway for new accounts any time in the near future. Maybe someday… but not soon. In Nigeria, where GT is based, consumers might have a different attitude towards online security. But in countries like the U.S., Canada and the UK, consumers still exhibit high levels of apprehension towards online security when it comes to their financial information. Study after study shows that adoption of mobile- and online banking solutions suffers because consumers are worried about security. And we aren’t talking about a small minority either; a significant chunk of the population is still wary of online financial tools, even after they’ve been around for years. Not to mention there is a thick layer of distrust surrounding the Facebook platform in general. Plus there are the usual challenges associated with opening any account online, namely ID verification and account funding.

It’s not that financial institutions shouldn’t experiment with- or offer consumers the option to open accounts on Facebook. Just don’t expect a tidal wave of new customers to come crashing through your page. Consumers still have a ways to go before they are fully acclimated to the new digital landscape. Until then, trust, confidence and security will continue to be linked issues.

Banks and credit unions struggle with Facebook at the most basic levels: building fans and creating engagement. While most financial institutions are already on Facebook, the vast majority have fewer than 500 ‘Likes.’ It’s hard to imagine a bank or credit union with only a few hundred fans pursuing an account opening system on Facebook. How many applicants would they see in a year? One, maybe two? Hardly seems worth the investment of time, money and energy to develop, much less expend any marketing capital trying to raise awareness, educate consumers and assuage people’s fears.

( Read More: Facebook Engagement in Banking: How The Top 5 Brands Get It Done )

Financial institutions with traction on Facebook — those with tens- or hundreds of thousands of fans and a high engagement rate — might consider an accelerated, more aggressive push into this new area. But for the next few years, it’s probably safe for everyone else to sit on the sidelines and watch — see how it goes before jumping on this part of the social media bandwagon. While management advice offered in clichés can be annoying, two in particular seem to apply in this situation: “Learn to walk before you run” (figure out Facebook basics first), and “You’ve got bigger fish to fry” (concentrate on more productive — and proven — account opening strategies).