First Direct, a UK subsidiary of HSBC, has rolled out The Lab, a social media platform seeking public critique and commentary on a range of the bank’s latest innovations, ideas and developments. Visitors to the site are invited to provide feedback on everything from product designs and service solutions to marketing tactics and even website concepts.

First Direct says it is hoping to engage with “both customers and the general public to co-create the bank’s products and services.”

The Lab features a “Live Tests” area that allows users to review and comment on the latest innovations, while the “Tried & Tested” section (currently empty) will display ideas that have previously been open for review, along with any updates. 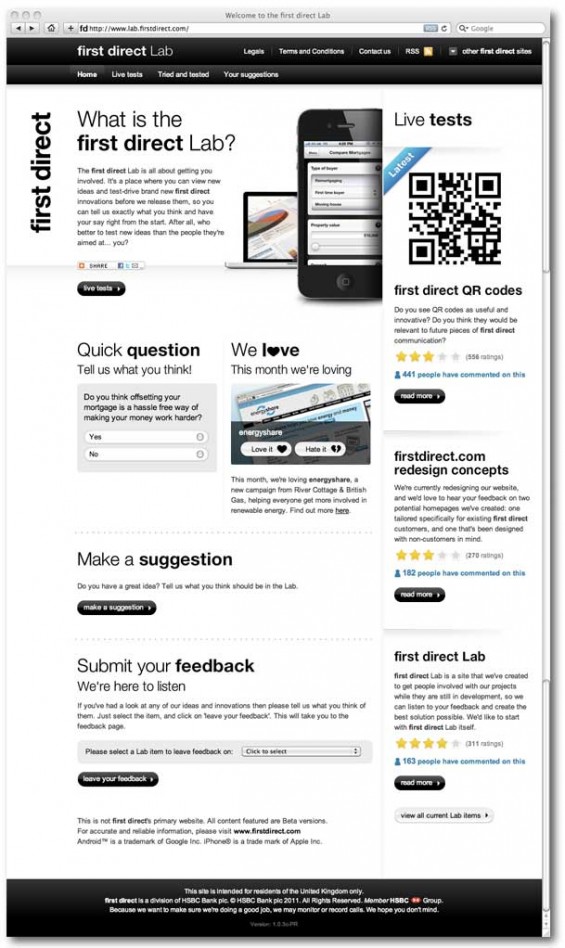 At launch, First Direct asked for user input on these four subjects:

Visitors to the site are allowed to rate each idea on a five-star scale. So far, every idea has scored an average of three stars except for The Lab, which most people are enthusiastic about, earning it an average four-star rating.

The site also incorporates a separate section for general suggestions.

The most popular item drawing the biggest reaction from the public has been the subject of QR codes. While some people can see the opportunities QR codes create, the vast majority of the feedback has been neutral to negative. People struggle to see the relevance and practical usefulness, describing QR codes as more of a marketing gimmick than something that really makes a difference. The majority of folks seemed to shrug and say “not for me.”

Feedback on the website designs First Direct is considering includes suggestions like “don’t try to cram everything onto one page,” and “customers should be able to customize their own homepage.”

“By providing a feedback platform for iPhone and Android app designs, web layouts and prototype demos, The Lab highlights that First Direct is not only at the forefront of technology and innovation, but that they really value customer opinion,” observed Jo Griffin, Account Director at MadeByPi, the agency who built First Direct’s online Lab.

Danielle Sheerin at Finextra agrees. “What makes this important is that this is first major UK bank to launch a dedicated service that allows customers a voice in development and provides a nod towards co-creation of services,” she said. “This marks a sea change in customer relations and First Direct has really stolen a march on their competitors with this launch.”

Paul Say, who was in charge of First Direct’s marketing at the time of The Lab’s debut, said it was “about changing the way people interact with banks by giving them a stake in some of the products and services that allow them to manage their personal finances.”

Say has since moved on to TD Wealth International, where (according to rumors) he may duplicate many of the online- and social media strategies he helped pioneer while at First Direct, including The Lab.

The Lab is open to everyone, including customers and members of the public, but First Direct would prefer to receive feedback only from residents of the UK. Unfortunately, there’s no practical way to enforce that wish.

First Direct says it plans to rotate ideas in and out of The Lab on a monthly basis.

First Direct has long been regarded as one of the UK’s most sophisticated banks with respect to social media. The bank’s other notable social initiatives include its Little Black Book and online forum Talking Point.

Customers have regularly voted first direct the best bank for customer service since it was launched in 1989 as a phone-only bank. Today, customers still primarily interact with First Direct via the phone — there are no physical branches — but the bank has grown to become one of the world’s most respected players in the internet/direct space. First Direct’s non-traditional business model has required an uncommon level of focus on digital and social media channels.

If you mention “social media” to bankers these days, it seems they all reflexively think “Twitter” and “Facebook.” While Twitter and Facebook certainly receive the bulk of the financial industry’s attention, it is those projects that don’t center on the world’s biggest social media properties that tend to have the most practical applications. If you want to do something truly innovative, truly breakthrough with social media in the retail banking space, don’t start with Twitter or Facebook. Think of ways to tap social media’s power without using either of these two platforms. It takes more creativity (because there aren’t as many examples to rip-off and emulate), but the process — and results — are likely to be much more rewarding.

First Direct says it is the first bank to embrace crowdsourcing. Not really true. While First Direct may be the first to invite public critique of its products and services on this scale, they certainly aren’t the first to tap the online public for opinions and ideas. Months before The Lab debuted, Capitec Bank crowdsourced an ad for $5,000, while DBS Bank asked the public to help them design a new branch. Credit unions have been crowdsourcing everything from logos to TV spots since at least 2008.

The good news about an initiative like First Direct’s Lab is that almost any other bank or credit union can deploy a similar concept. There really aren’t any barriers to entry — manpower, cost or scale of infrastructure. If your financial institution’s brand leans heavily on themes of “listening” and “responding” to customers, then you might want to get your own version of this project underway.

If you value market research, then an online “feedback lab” is going to be way cheaper — and faster — than focus groups, and those participating will skew towards the younger, more tech savvy audience comprising the bulk of tomorrow’s consumers.