Subscribe Now Get The Financial Brand's FREE Email Newsletter
Facebook quietly rolled out a new feature that allows its users to publicly rate companies on a five-star scale. What does this mean for banks and credit unions on Facebook? Here's what you need to know.

If you look at the top of your organization’s Facebook page, you may notice a new — and potentially very scary — feature at the top of your page, right under your company name: a rating ranging from 1 to 5 stars. With zero warning, Facebook ambushed millions of social media admins by sneaking star ratings onto company pages. It’s a tiny little feature with massive implications.

(We know some of you are freaking out right now, so we’ll wait as you rush over to your page to see if you’ve got star ratings deployed without your knowledge.)

First let’s look at how it works. If your page has star ratings activated, look at the right column in your Timeline. Underneath the first box where it says “Recent Posts by Others,” you’ll see another box titled “Reviews.” Anyone visiting your page can give you a rating of 1 to 5 stars. They don’t have to ‘Like’ you first, they don’t have to be one of your customers, and they don’t even have to live in your geographic area (or even the same hemisphere. And they can rate you completely anonymously.

Scared yet? If not, then think about this: What if a disgruntled employee decides to wage war and rally their 5,000 friends against you? Or a competitor wants to play dirty? You could have a 1-star rating overnight.

Or what if you make a big mistake — let’s say your online banking system goes down for 10+ days, or your CEO starts acting like Rob Ford, the degenerate mayor of Toronto — you can expect a virtual mob rushing in to give your Facebook page 1-star ratings. It could take you years to build up a good rating… and then minutes to see a vindictive hoard tear it apart.

Read More: 15 of the Best Facebook Pages in Banking to Watch

Why Aren’t Ratings Showing Up on My Page?

Facebook has been running its ratings system on mobile devices since early 2012. The system was tied to Facebook’s check-in feature, so that users with GPS-enabled mobile phones could rate and review local businesses. Without any kind of public announcement, Facebook decided to roll the ratings system out to all pages and platforms. They also elevated its prominence, putting star ratings in prime real estate between the Cover Photo and Timeline — users can’t miss it now.

But some pages have star ratings and some don’t. Why is that? Because Facebook’s original version of star ratings was tied to mobile check-ins, the ratings will only appear on pages that have supplied a physical address as part of their profile.

If you want to add star ratings to your page, you can simply add a physical address to your Facebook company profile. 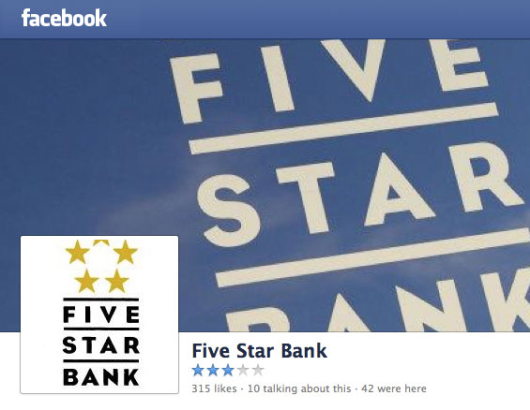 This 3-star rating doesn’t look good for Five Star Bank. Even the bank only gives itself 4.5 stars in its profile picture — the top half of the fifth star is cut off.

How Can I Get Rid of Star Ratings?

If you’re like many financial marketers, the thought of allowing the general public to hand out grades on such a high profile site like Facebook probably has you quaking in your boots. So how do you turn it off? There’s a couple things you can do.

First, remove the physical address from your Facebook profile. The other thing you can do is turn off check-ins under the map in the address area of your “Page Info” settings, but this will also remove the map from your Facebook page. Your third option is to change the category of business you specified in your company profile to “Other.”

Key Question: Why is this so complicated? Why doesn’t Facebook just give page admins a simple check box to activate and deactivate star ratings?

The Financial Brand studied 50 Facebook pages that have star ratings deployed — 25 banks and 25 credit unions, listed in the tables below. Here’s what we found.

Don’t be afraid to ask your fans to rate you. After all, they are your fans. In all likelihood, they will give you four- and five-star ratings (at least that’s what the early data suggests).

Credit unions are higher rated than banks. Credit unions average 4.5 stars while banks average slightly less as 4.2 stars, but those are still very high marks for an industry besmirched as frequently as banking.

People will give you a 1-star rating when they aren’t happy. Consumers are twice as likely to give a 1-star rating — the lowest possible score — than they are to give a 2-star rating. What does that mean? It means if people aren’t happy with you, they won’t give you a tempered, thoughtful, reasoned evaluation… they’ll just rush straight for the bottom of the ratings scale as retribution. Consumers are savvy about how averaged reviews are calculated, so angry people want companies that frustrate them to pay dearly with their public ratings. But that simply isn’t that many people; only 7.4% of all ratings given to financial institutions are 1 or 2 stars.

There is no apparent correlation between the size of an institution and its overall Facebook star rating. There is a widely held belief in the financial industry that consumers don’t love larger institutions as much as they love smaller ones.

The bigger the institution, the more times it will be rated. This one is pretty obvious, but the correlation between the size of an institution and the number of star ratings it receives on Facebook is strong, steady and predictable. A credit union will see an average of one rating for every $3.6 million in assets it has, while banks will see one rating per $38.5 million in assets. The average credit union has received a total of 477 ratings, whereas the average bank has seen 310 — 35% less.