If you’re like most every other bank or credit union in the financial industry, you’ll have less than 1,000 ‘Likes’ on Facebook. On Twitter, you’ll have fewer than 250 followers. But what if you’re a top performer — among the industry’s social media elite? How many ‘Likes’ might you have? Roughly one for every $500,000 your financial institution has in assets.

Using The Financial Brand’s Power 100 tool, a database of financial institutions with the most Facebook ‘Likes’ and Twitter followers, you can analyze the size of the social media communities built by banks and credit unions in the U.S. relative to their asset size.

Among all financial institutions in the Power 100 database, the average is over $700,000 in assets for every one ‘Like’ on Facebook, and $5.8 million for every one follower on Twitter. Again, remember: these are stats for the top banks and credit unions using social media today.

Comparing banks vs. credit unions, it seems that not-for-profit financial cooperatives have an easier time building their social media communities. Among the top banks on Facebook, the average assets-per-Like works out to $834,749. But for credit unions, this number drops down to $140,826 — a factor of six. 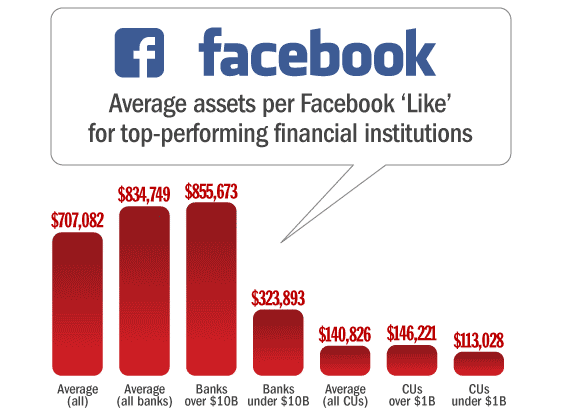 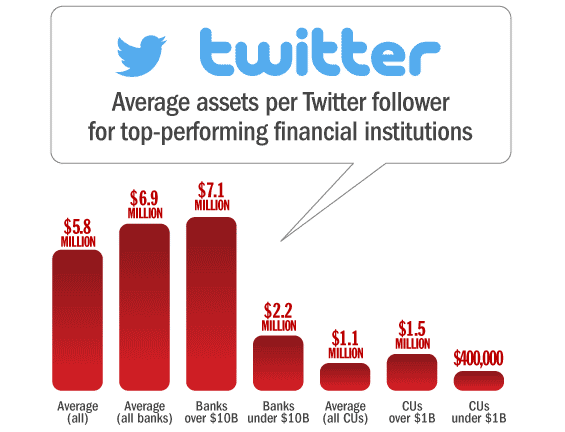 Assets Per Follower for the Top 10 US Banks on Twitter