Subscribe Now Get The Financial Brand's FREE Email Newsletter
Eastern Bank parlayed a social media campaign into a successful guerilla marketing promotion. The bank hid a bunch of GoPro video cameras around town, then released clues to their whereabouts in social channels. It's a great story about finding hidden PR opportunities, and how one door can lead to another.
Subscribe Now!

Back in May 2013, Eastern Bank asked its team of business bankers and branch managers to nominate small businesses to feature on its Facebook page. One branch manager suggested Plenty of Twenties, a boutique guerilla marketing company that gives away (at least) $20 every day by revealing clues in fun, free contests open to the public.

“When we posted their business on Facebook, our fans went nuts,” recalls Andrew Ravens, VP/Director of PR & Social Media at Eastern Bank. “They loved the concept, so I immediately set up a meeting to see how we could work with them.” 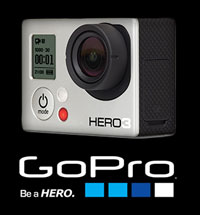 The bank was offering a free GoPro camera to folks who opened up new checking accounts, so a plan was hatched: Plenty of Twenties would hide six $200 GoPro cameras around Eastern’s Boston market. (For those who don’t know, GoPro is a camera that has completely revolutionized the world of personal video. It retails for around $199 up to $399. This is one of the hottest gifts you could give someone.) Clever clues and riddles revealing the cameras’ hidden locations would be distributed via email and social channels, including Facebook and Twitter accounts maintained by both Eastern and Plenty of Twenties.

Eastern Bank has a respectable 14,000 ‘Likes’ on Facebook, and just over 1,000 followers on Twitter. Meanwhile, their partner Plenty of Twenties has over 3,600 fans on Facebook, and 2,100 followers on Twitter, plus 3,200 email subscribers (with an open rate averaging north of 33%). Remember: Plenty of Twenties is a local business in Eastern Bank’s backyard, so all their fans and followers are geographically relevant — in or near Boston. With an aggregate audience size totaling just under 25,000, Eastern Bank reached a good chunk of its target market.

Ravens said he wanted to work with Plenty of Twenties because his company is “clever and fun — very ‘unbank-like.'”

“We don’t need more photos of people pushing their children in swings, which is typical boring bank marketing,” Ravens explains. “Guerilla marketing is fun and it works. This is proof.” 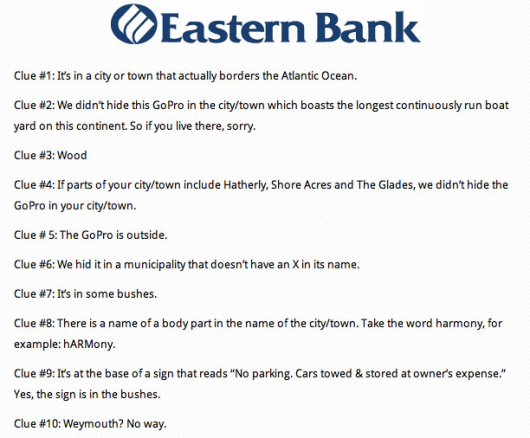 Two of the riddles Eastern Bank used to help people find the hidden cameras. The riddle below took over a week to solve. 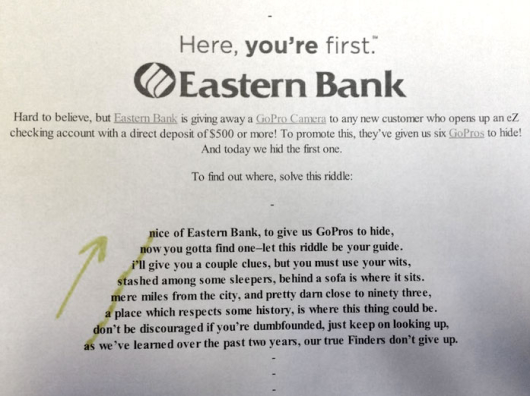 The effort generated thousands of brand impressions for Eastern. For instance, When Plenty of Twenties revealed one of the clues — cleverly embedded on the bank’s landing page — Eastern saw 500 visits to the GoPro promotional landing page in only three hours.

The bank was also able to generate several organic conversations on Facebook.

“We started chatting with those looking for the cameras, rather than chatting at them,” Ravens says. “Eastern Bank became part of the fun.”

Ravens used the opportunity to “soft sell” the bank’s GoPro checking campaign in its Facebook conversations.

“We mentioned every once in a while that there was an easier way to score a GoPro by opening a checking account,” continues Ravens. “People were totally okay with this, and didn’t bash us for ‘selling’ because the promotion was cool on so many different levels.”

“I’m an Eastern Bank customer found out about this promotion from their Twitter feed, and I followed every post,” wrote one person on Facebook after the promotion was over. “This was a big win for Eastern Bank.” 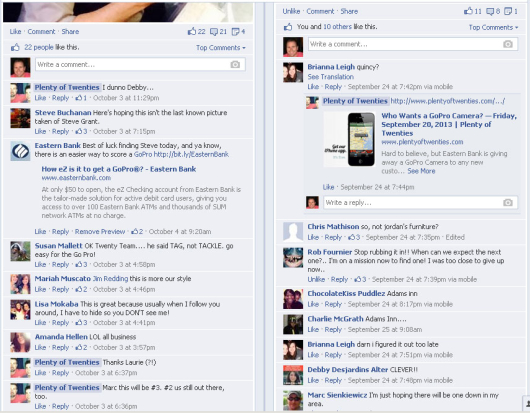 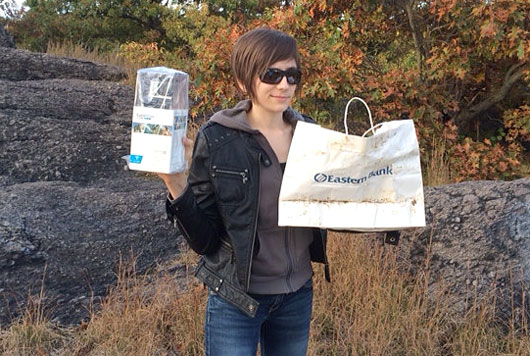 One of the lucky winners tweeted a photo of herself to her 3,000+ followers, which was subsequently retweeted by several others.

Only two of the six winners were already Eastern Bank customers. One winner was a former customer, who then signed up for a bank account to get another GoPro.

Internally, the promotion generated a ton of excitement. Several branch managers hoped that a camera would be found near their location.

“We made sure that every camera was located in an areas where there was an Eastern Bank office,” Ravens says. “We encouraged branch managers and all employees to use their social accounts to spread the word… and they did.”