Tracking the return on investment for social media efforts can be a tricky proposition, particularly for financial institutions. But Alliant Credit Union was able to bang out some strong results by leveraging a third-party online loan generation tool.

Back in November 2013, Alliant was looking to align its social media and digital efforts with the credit union’s lending products. Alliant wanted to improve its Facebook engagement metrics, attract a younger audience and generate more loans, so the Chicago­area credit union adopted Shastic’s Calcubot Cloud.

Calcubot Cloud gives banks and credit unions a tool that walks prospects through an interactive buying process tailored to the financial institution’s lending strategy. Consumers can specify terms like down payments for mortgage and auto loans, set up alerts for interest rate changes, share estimates with co-borrowers, and initiate the loan application process. 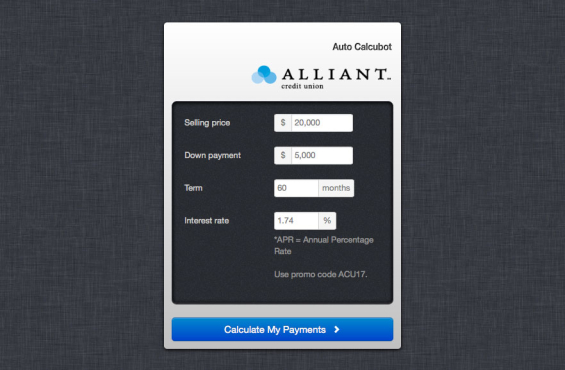 Alliant, which promotes Calcubot on its homepage and prominently on its Facebook page, tracked the leads accurately through a promo code that users entered when applying online for a loan.

In the first four months of using the product, Alliant’s Facebook and online Calcubots attracted nearly 6,400 visitors. 82% of those generated an auto loan estimate from the credit union. Calcubot drove 478 qualified prospects to Alliant’s online auto loan application — that’s a 9.1% conversion rate among those interacting with the tool. 39% ended up submitting an application, with 7% funding loans totaling $887,043.

CitizensFirst Credit Union in Oshkosh, Wisconsin has been using a company called Chatter Yak! to run Facebook contests over the last year. The credit union’s initial strategic goal was to grow their fan base, in order to reach critical mass before running any promotions. In the last three quarters, they’ve added over 1,100 new Facebook Likes. Today CitizensFirst, has over 5,800 Likes, putting them at #59 on The Financial Brand’s list of fastest growing credit unions on Facebook. For context, the credit union has roughly $580 million in assets and 47,000 members.

More recently, CitizensFirst has been focusing on generating social ROI with new loan leads. In March of 2014, they closed $117,000 in loans from leads generated through a Chatter Yak! contest. In April of 2014, 45 new loan leads resulted from another promotion. Another contest in June yielded 786 entries and 263 loan leads, bringing in an additional $187,978.14 in consumer loans. According to Deb Schaeffer, business development manager at Chatter Yak!, says the credit union has yielded $498,000 in total Facebook loans since February (roughly six months).

“CitizensFirst stepped it up and got aggressive,” Schaeffer told the Credit Union Times. “Instead of offering contests to up the fun factor or boost enthusiasm they decided to go after leads, and it’s paid off. So those who say you can’t prove ROI, yes you can.”

Another Chatter Yak! client, MidUSA Credit Union in Middletown, Ohio, put a philanthropic spin on their most recent contest by giving away $200 to one random winner — $100 to the winner and the additional $100 was gifted to a charity of the winner’s choice. The contest ended up generating 13 new loan leads for them. They booked a $10,000 signature loan, a $5,000 credit card, a home equity loan, and two members registered for MidUSA’s Home Advantage Program (a realty service provided by the credit union).