Subscribe Now Get The Financial Brand's FREE Email Newsletter
For bank and credit union marketers who know they need to up their game in social media, it's not necessary to start from scratch. Check out what some of the more advanced financial brands are doing and put some of their creative resources to work for you. Some or all of the ideas here can be adapted to your needs and scale.

Social media network users reached 2.77 billion in 2019 and are projected to hit 3.1 billion in 2021, according to Statista. No financial institution — regional, national or global — can afford to ignore the immensity of that market reach. While few are ignoring the potential, many financial institutions are unsure how to position themselves on social media even though they realize how important it is to be active on Facebook, Twitter and other social channels.

Social media can help any bank or credit union build online traffic and conversions, create brand awareness, and communicate with consumers in their preferred channel. To help jumpstart the marketing creative juices, here are specific strategic and tactical examples from six financial institutions each with strong social media voices. Although all the companies are large, each offers ideas that other institutions can apply at a scale that suits their situation.

Banking can be a very boring. Wells Fargo, however, combines the perfect mix of videos and images on in its social media accounts. The third-largest U.S. bank, long a digital banking pioneer, covers a wide range of topics on social media channels — with topics of interest not only to Millennials, but even academic audiences. The mix of social media content includes events, financial tips, quotes, and fun facts. 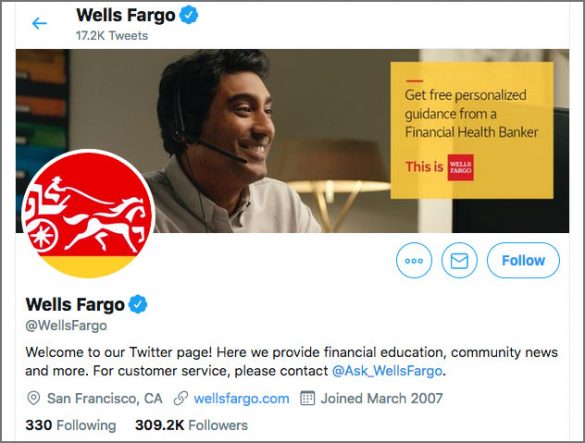 With social media it’s essential to know your target audience. Wells uses a different strategy for each social media channel to increase its reach. Millennials are one of its primary targets.

Other financial marketers seeking to improve their social media presence should first determine their target audience and then shape their social media voice and channel to best communicate with those potential customers. LinkedIn, for example, is a more formal channel than Twitter or Instagram, although all the channels continue to evolve, so marketers have to review their approach regularly.

If a major focus of your social media audience is Millennials, you could heed the advice of HSBC U.S.’s Head of Innovation, Jeremy Balkin, and use “ABCD communications” to reach them (Authenticity, Brevity, Context, Digital). As he explains in Forbes, this approach involves getting straight to the point, getting rid of banking jargon, and explaining why and how your service or product works. And, of course, be sure it’s all presented digitally.

2. Be Visual: Bank of America

As the second-largest bank in the U.S., Bank of America has about 66 million customers. The megabank does a great job with their visuals on social media, and their number of followers proves that.

Instead of reposting the same content on different social media platforms, they create unique visuals that fit each audience. Above is a composite used on its Facebook page. It’s much more work to find and place the right images, but a study from Buffer shows that tweets with images get 18% more clicks, 89% more favorites, and 150% more retweets.

Take time to create or find stunning visuals for your social media accounts. Inspirational, humorous, and beautiful images and videos are a great addition to any social media account. And it’s better to complete your tweet or post with a funny or creative caption to increase the chances of it becoming popular.

Using social media, PNC Bank has taken its customer support to a whole new level. One way they did this was by creating a separate Twitter account called: PNC Bank Help that quickly solves customer support issues. If a customer tweets that they are having trouble with their credit card or with accessing their bank account on the mobile app, PNC staffers respond with tweet to resolve the issue in a timely manner. If the information required is sensitive, the bank and customer can shift to a private Direct Message. 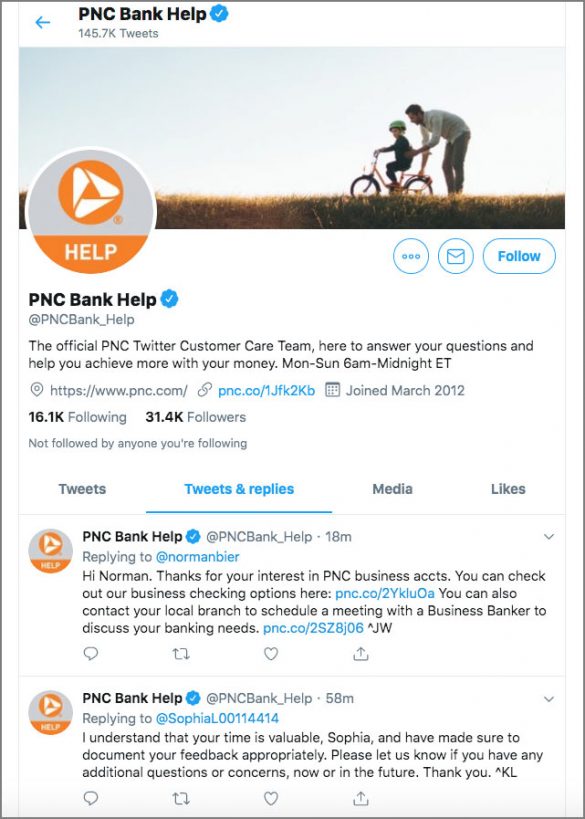 Along with offering help on social media, PNC runs giveaways and contests often, which are great strategies to keep your followers engaged.

The latest social media campaigns by Chase have included popular athletes. In one variation, they brought together basketball icon, Steph Curry, and tennis star, Serena Williams for a “Battle of the Paddle” ping-pong match, set up with a video ad on Twitter. After the first challenge tweet was sent by Serena Williams, the buzz began. 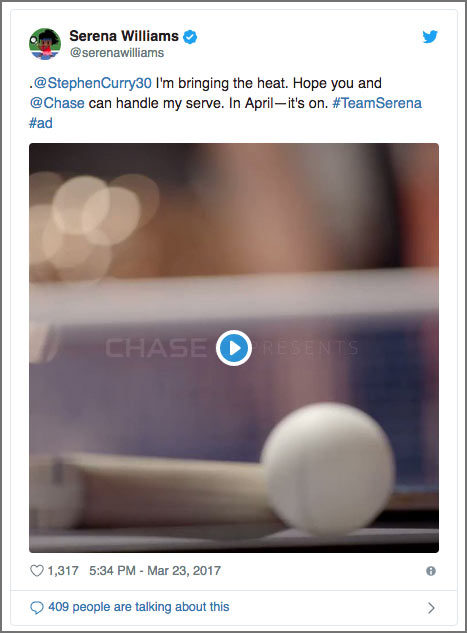 Curry’s response was: “Bring that backhand in April. Chase has the table, I’ll see you there.”

The success of this campaign played off the popularity of sports in general and these two star athletes in particular. Chase also uses sports personalities to increase the financial knowledge of its followers by creating an online series called, Kneading Dough, with LeBron James’ media company, Uninterrupted. 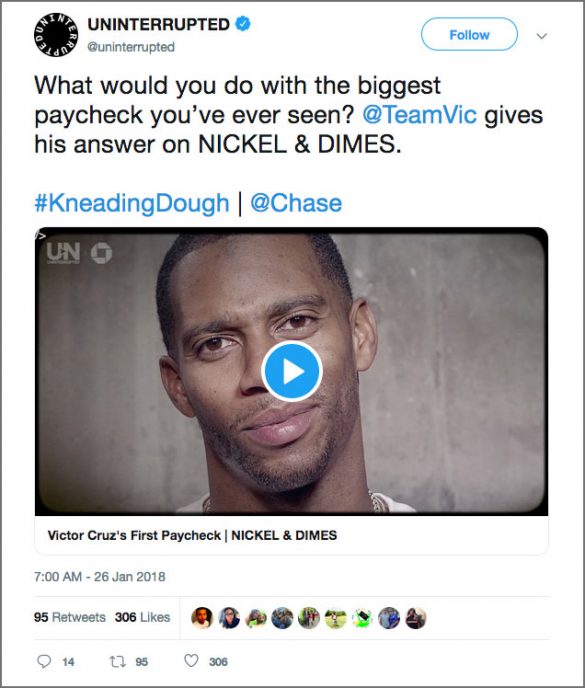 This campaign features conversations with professional athletes including James, football player Victor Cruz, and Draymond Green, one of Steph Curry’s teammates on the Golden State Warriors. In the videos the athletes tell their own stories of trying to make ends meet before they became superstars.

Smaller institutions obviously can’t land Lebron James for a campaign, but there may be local sports stars, or retired athletes or other local influencers who may be willing to participate at a modest cost.

Another financial institution that educates their followers about finances is the big investment bank and retail brokerage firm Morgan Stanley. The firm manages over $2 trillion in customer assets, some of which comes in through social media.

One Morgan Stanley agent brought in a $10 million client through LinkedIn. It’s an example of how an educational and analytical tone of voice on social media can be successful. All the social platforms — and their users — frown on hard sales. Morgan Stanley also shares financial advice and analyses on Twitter. 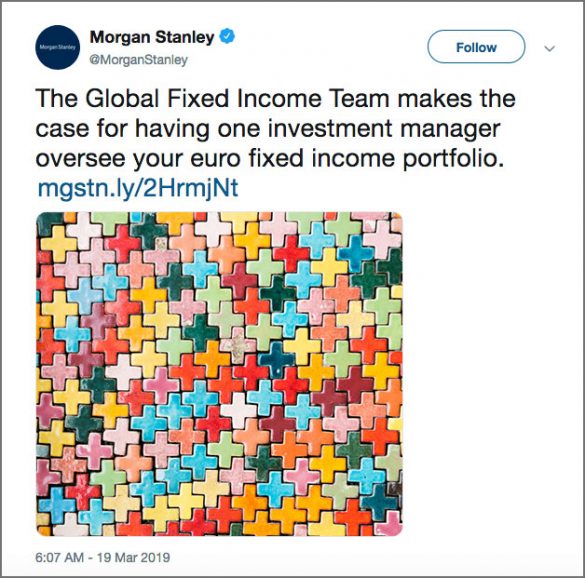 To further establish its leadership in the financial world, Morgan Stanley also launched a podcast called: Ideas Podcast. This is a concept that a smaller financial institution can copy using either in-house expertise or a local expert. 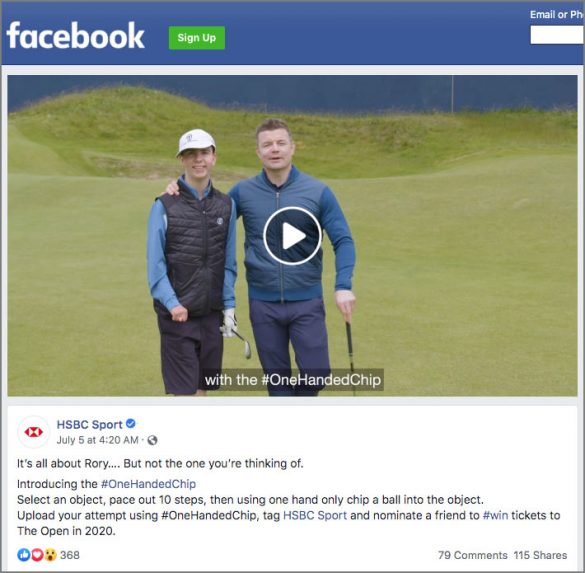 This method can help to boost your overall engagement rate. As a result, each social media platform will show it to more people. Furthermore, marketers think that the effectiveness of interactive content is 93% while static content only hits 70%.

You don’t have to be HSBC to also encourage users to interact with your content. Although video production is far more accessible now, there are other types of content that can build engagement. Here are several that Point Visible uses in its work with financial institutions:

The above examples demonstrate the today financial institutions can not just monitor Twitter and Facebook, but offer quick customer service on Twitter, educate potential customers about financial matters, learn what’s important to consumers, and engage with their audience in ways that span human interest, financial challenges, and humor.