Subscribe Now Get The Financial Brand's FREE Email Newsletter
Banks and credit unions should exploit Instagram to show a human side to banking... while there is still an opportunity to stand out.

It helps to anticipate what your competition will do next.

For instance, think about this. When Facebook first started showing ads, only a brave few companies signed up. Competition for ad space was low, so the cost was negligible. There was much less noise, so getting seen by your target audience was pretty easy.

Nowadays, Facebook is cutting down ruthlessly on the amount of stuff people see. Ads cost significantly more, and there’s intense competition from other brands. Just four years ago, a brand could still reach an average of 11% of Facebook users without buying ads; today that’s less than 4%.

The answer is to go where the competition isn’t. After all, it’s easier to cut through all the clutter where there’s less clutter.

Yes it is, and it’s already much bigger than marketer’s other social media darling, Twitter. While Instagram has 500 million users — up 100 million since last year — Twitter has 310 million users… and falling.

This raises a question: why is the channel under-utilized by retail banking providers? Within the top 4,500 brand accounts on Instagram (ranked by number of followers, there are only 40 financial brands. The top financial brand on Instagram is Amex, but it ranks at #1,481. And not one major UK bank even has an account.

Let’s face it: financial institutions aren’t the most liked and admired companies out there.

One survey of 2,000 adult consumers found that only one in five said they trusted the financial firms they dealt with. And in the US, all four of the leading banks are among the ten least-loved brands by Millennials. Half a decade of scandals has not done banking providers any favors.

The digitization of banking has increasingly forced banks to make themselves more useful to consumers. Banks are falling all over each other to update the functionality of their apps. However, moving towards digital channels has the potential to exacerbate the already strained relationship between banks and their customers.

As financial institutions try to cut costs, branches get shuttered and staff get replaced by chatbots, artificial intelligence and mathematical algorithms. However, research from Mintel suggests two-thirds of consumers trust the staff at their local branch — significantly much more than they trust any other aspect of the bank. For instance, just 36% trust staff in the call center staff.

The bottom line here is that banks have a tough job endearing themselves to their customers.

Facebook is good for sharing information. Twitter is great for customer service. But Instagram’s visual nature gives it a role quite distinct from the others: brand building.

Brands on social media are often tempted to share every single insignificant detail about themselves — their new app upgrade, their new ad, etc. But this reflects a misunderstanding not only human nature but the power of a social channel like Instagram.

You must emotionally engage customers through storytelling.

We can often forget that banks fulfill a critical function in our society, and that is lending money to businesses — particularly the small businesses — that we use on a daily basis.

Banks and credit unions can take advantage of this and share the stories of the small businesses that they work with. The success of Humans of New York (with its six million followers) shows that people will engage in human stories, particularly when photography is used to bring these stories to life. Citibank is a bank that has started to do this effectively. They have 13,500 followers on their growing Instagram account, thanks in part to their excellent use of imagery. 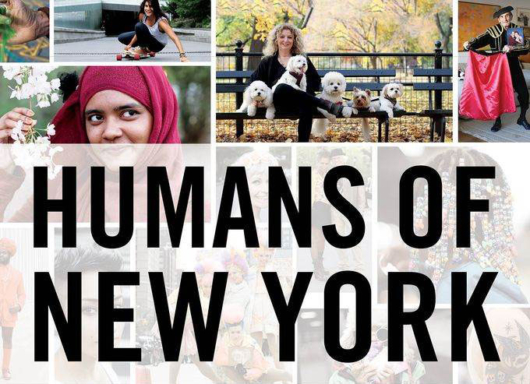 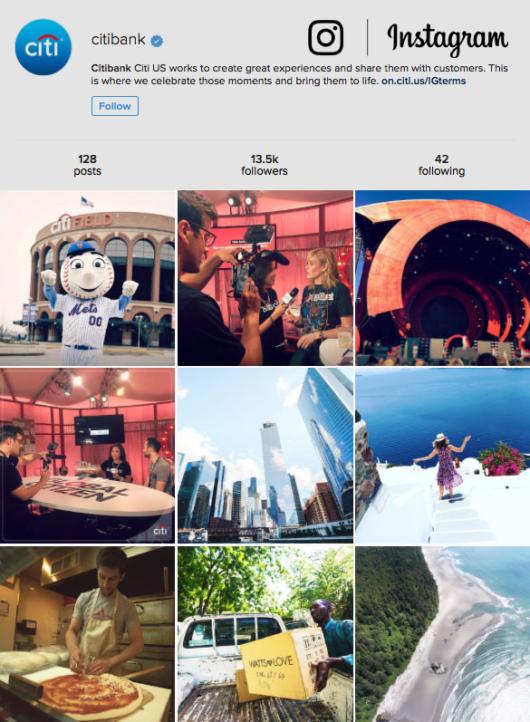 The stories that you choose to share can come from inside the bank too — that great case study of a staff member going above and beyond for a customer is a perfect story for Instagram. It’s a great way to create priceless good vibes with those involved. This approach can be further enhanced when the stories involve the customers themselves.

For instance, American Express ran a campaign called #MyAmex in which Instagram influencers shared how Amex impacts their business. Over two weeks, Amex doubled its number of followers on their Instagram account — they now have 146,000 — and the #MyAmex posts generated 23% more engagement than any of the brand’s other Instagram material. In total, the campaign generated over 10 million impressions. 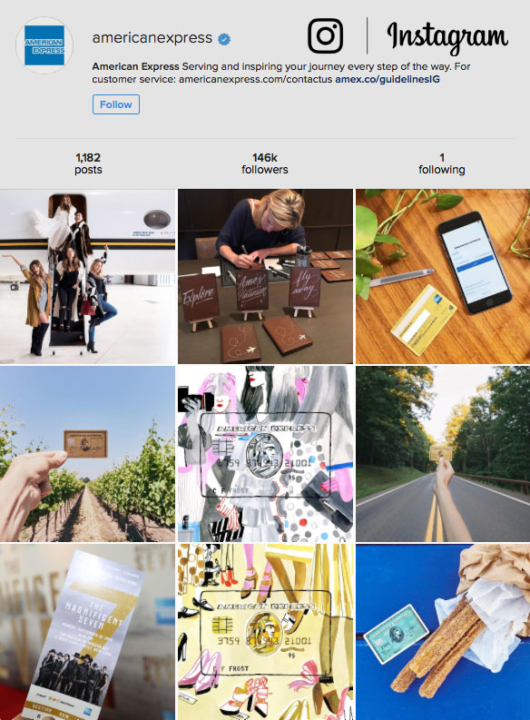 Similarly, Capital One created the #walletstories campaign, a play on their slogan “What’s in Your Wallet?”, in which influencers shared their life stories through the contents of their wallets.

US Bank has also managed to bring banking to life for the younger generations through their Instagram account. They also worked with Instagram influencers to highlight — through captivating photography — the role saving can plan when trying to achieve the things we want in life, and how to get started.

What could have been dull marketing messages from stuffy banks have been transformed through Instagram’s visual medium. That’s why banks that aren’t on Instagram are missing a big opportunity. Jumping on board now is the best way to take advantage of it.