In a study that was never actually conducted, 97% of Millennials who really weren’t surveyed said that the number one thing that would get them to save more money is a mobile app.

More seriously, in a Financial Brand article that was actually published–titled Is This The Killer App to Get America Saving–Jim Marous writes about a new company called Digit, which is a:

“Free savings application that uses spending history and habits to help save money without the user even noticing. By monitoring a linked checking account’s spending patterns, Digit uses contextual analytics to determine when and how much to pull out of the linked bank account into a FDIC-insured Digit custodial account held at two of its partner banks, Wells Fargo and BofI Federal Bank. “Digit tries to arrive at a small amount of money it knows the user won’t need, but more importantly, might not feel is missing based on recent spending and income,” states company founder Ethan Bloch.”

“More than anything else, the reason Digit will most likely succeed is because Americans are terrible at saving.”

My take: Jim may be right that Americans are terrible at saving. But that’s not a reason to guarantee (or even cause or contribute to) Digit’s success. Digit’s success will be determined by how many consumers buy into the firm’s approach to saving, and–more importantly–how Digit generates revenue for providing the service. There’s a broader question to answer here, however: What will it take to get Americans to save more?

I’m going to re-orient Jim’s question to Is This The Killer App to Get Young Americans Saving?

I can’t support this assertion with any quantitative proof, but if technology (online or mobile) hasn’t been successful in getting consumers over the age of 35 (and especially those over the age of 50) to save more over the past 20 years, is it likely that a new app or technology-based service will succeed in changing their behavior?

So I might be terribly wrong here, but I’m going to focus my analysis on consumers between the ages of 18 and 34.

With eight in 10 young (18-34 years old) Americans with smartphones, we’ve got a good start to putting a mobile app–or any app like Digit–into their hands. But is Digit’s approach to savings the right approach?

The answer is, for some, yes–but not all.

In a consumer survey conducted in Q2 2013 in conjunction with JPMorgan Chase, we asked consumers how effective they believed various saving approaches would be with them. The “forced, automatic deduction” option–which I think is most closely aligned to Digit’s approach–was seen as “very effective” by roughly one in five younger consumers. However, of the alternative approaches asked about, this approach was seen as very effective by the fewest respondents. 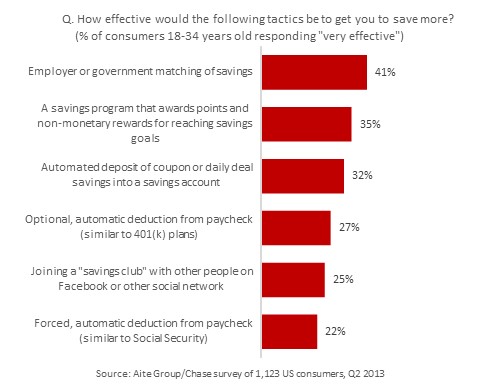 But to address the question of whether or not Digit is a savings killer app we also need to understand what keeps people (in this case, younger people, not us old fogeys) from saving more in the first place.

I didn’t ask consumers to what extent “not having a digital app to force them to save” was preventing them from saving more. My bad.

I did ask about other reasons, however. The number one reason why young consumers don’t save more: Not enough money left at the end of the month. 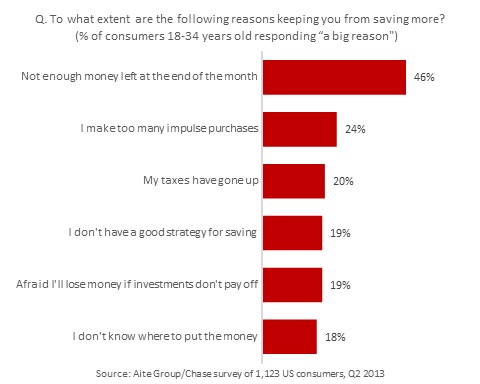 So there is some rationale behind Digit’s approach: If you don’t have enough money left at the end of the month to save, we’ll just take away some of it as you go along and force you to save–and perhaps, keep you from making those impulse purchases which might be contributing to your inability to save!

In retrospect, my survey question wasn’t as good as it should’ve been. I should have delved deeper into why people didn’t have enough money at the end of the month to save. I did capture a couple of reasons–like too many impulse purchases, and higher taxes. But I’m sure I missed more prevalent reasons like: “The amount of money I spend each month leaves little left over to save.” My bad, for real.

Marous’ contention that Americans are terrible at saving may be true at a macro level, but the survey data suggests that not all Americans (let alone young Americans) are guilty. 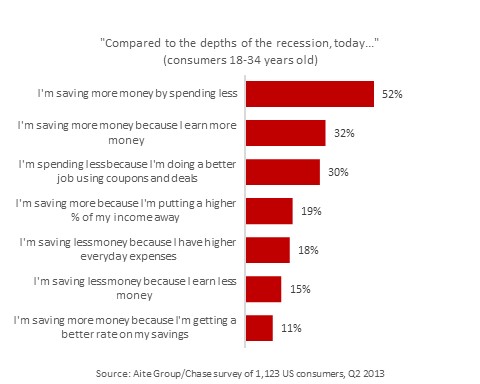 Wikipedia says a killer app is a computer program that is so necessary or desirable that it proves the core value of some larger technology. In the context of this post, we can translate killer app to mean a program that gets a significant percentage of consumers to save more. Is Digit a killer app? No way.

Does that mean Digit will fail? No, not at all. Any business can succeed with a relatively small number of customers if it can generate a meaningful (i.e, adequate) amount of revenue from the customer base.

There are some issues that Digit will have to deal with. If I understand correctly how the service works, it moves money from a customer’s checking account to an account at Wells Fargo of BofI Federal Bank. Do consumers really want their money taken out of one bank and put it another? Could this have unintended consequences in terms of the fees that consumers might end up paying to their checking account providers if balances fall below a minimum level? Maybe this already factored into Digit’s algorithms.

Anyway, I’m not trying to disparage Digit. I’m simply trying to say that its approach isn’t for everybody, and I’ve got the data to back up my assertion.

Bottom line: There is no killer app to get Americans to save more.

I joked recently on Twitter that I had invented an even better approach than Digit’s to get Americans to save more. I called this approach S3M3, or Stop Spending So Much Money, Moron.

The lesson for traditional banks here is not that they should develop apps that rely on statistical algorithms to pull money out of the checking account to stick into a savings account (that likely offers 0.0000001% interest, or whatever the rate is these days).

The real lesson is that banks need to do a better job of helping people manage their money (there’s a reason why the subtitle of my just-released book is Why Money Management is More Important than Money Movement to Banks and Credit Unions). Today’s PFM tools, seamlessly integrated into the online banking platforms simply don’t deliver the advice that many people want or need.

The lesson that established banks seem to be missing in today’s environment is that startups like Moven and Digit are providing technology-based services to help people better manage their money, and improve the performance of their financial lives.

Are these startups going to disrupt and displace established banks? NO! Stop propagating that ridiculous contention. The threat isn’t wholesale displacement. The threat is not capturing incremental revenue opportunities from providing value-added services on top of the core service (in this case, the checking account).