The mobile wallet space continues to evolve. Maybe devolve is the better word.

Initial reviews have not been particularly complimentary. TechCrunch called it a “quiet debut.” @heathervescent called her interaction with the wallet “BO-RING.” @mdudas tweeted “Amazon released a joke of a mobile wallet product today.” Mike’s beef with the product (expressed in a public tweet) is that “It only stores digital versions of loyalty & gift cards, there’s zero payment functionality.”

A comment from a Bank Innovation article caught my eye:

“The app does not (yet) have the ability to store credit and debit cards, which seems to be integral for a mobile wallet.”

That’s the essence of the issue here. What is a mobile wallet, and what, exactly is “integral”?

Regardless of how you define mobile wallets, or what is or isn’t integral, some of the consumer data regarding the concept is perplexing. According to a Media Post article:

“While most consumers (78%) are aware of digital wallets, only about a third (32%) has ever used them, according to the 2014 Digital Wallet Usage Study by Thrive Analytics.”

But I don’t think it is. That percentage seems way too high. Maybe the Thrive study’s numbers refer to percentages of smartphone owners, not all consumers (note to Media Post: That’s kind of an important distinction).

The Thrive study also found that, among mobile wallet users (however many of them there are), just one-third used a mobile wallet at least on a weekly basis, and just 7% used it daily.

Data points of one are dangerous, but when I ask my wife–a baby boomer who manages the family’s finances–about her interest in mobile wallets, her response is: “What’s a mobile wallet? What I really need is something to keep track of all the damned gift card and prepaid cards we have. I hate carrying those things around, and when I do, I have no idea how much money is on them.”

Neither Mike’s nor my wife’s opinions of mobile wallets are right or wrong. They simply point to the varied needs of (potentially) different segments of consumers. The question is: Which segment is bigger, and will drive the market for digital wallets?

That is, the mobile moments of opportunity come during consumers’ decision-making process, and in the tracking and analysis of their spending post-payment. 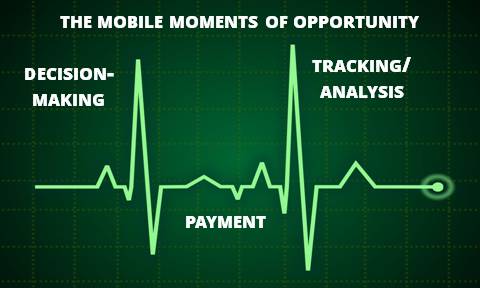 In the course of the shopping or purchasing experience, before the actual payment transaction, consumers want to know:

1) Is this the right product for me? That’s why 40% of smartphone owners scan labels and UPC codes in the store while shopping (source: Aite Group).

2) Is this the best price I can get? That’s why about a third of smartphones store coupons on their mobile device (source: Aite Group).

3) How can/should I pay for this? Would putting this on my Amex credit card be better than paying for it with my debit card or some other credit card I have? Do I have rewards points I can apply to the purchase?

After the payment transaction, consumers want to know:

1) How much did I spend on a particular category of product so far this month? Haha, just kidding. Nobody really cares about that. OK, seriously, just kidding about kidding. The history of PFM adoption would suggest that not a lot of people care about this question. I would argue, however, that the low adoption is more a function of the shortcomings of online PFM than a function of low interest on the part of consumers. As mobile PFM evolves, we’ll see more interest in this question.

2) Where are all those receipts for all those products I purchased? That’s why about a quarter of smartphone owners scan paper receipts into their smartphone (source: Aite Group). (I always feel bad for those consumers who do that who shop at CVS–it must take them an hour to scan the receipt from just one visit).

A wallet is nothing more than a receptacle to hold things. In modern society, a wallet has evolved to hold things we make payments with. Most people, however, keep other things–photos, drivers license, pictures of their kids–in their wallets, as well. So a wallet doesn’t have to be just for enabling payments.

Shouldn’t that logic apply to digital wallets, as well?

Using a mobile wallet to simply make a payment might be faster, but I doubt many consumers see a big difference. And cheaper and better don’t factor in.

Cheaper and better come from functionality that surround the payment.

Bottom line: In the long run, the concept of a digital wallet won’t last. The smartphone is the mobile wallet. The smartphone is the receptacle that holds all the functionality–pictures, personal identification, payment mechanisms–that today’s (non-digital, I probably shouldn’t call them non-mobile, because they are mobile) wallets provide.

The mobile moments of opportunity come from providing capabilities that go beyond simply digitizing the existing set of capabilities.