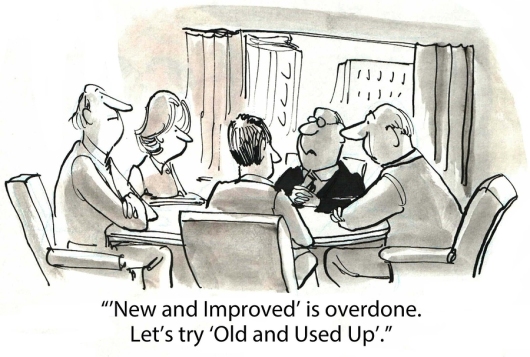 I’ve come to the conclusion that there are five types of people who attend my conference presentations:

My evaluation scores are totally dependent upon the distribution of attendees across these segments. I mean, I know I give a great presentation, so a low score can’t be my fault, right? You might think I wouldn’t want Group 5 people at my sessions, but I’m OK with them (as long as they give me a good rating). It’s the Group 1 people that I wish wouldn’t show up. They’re always disappointed.

At a recent conference of credit union CEOs, I presented a session on The Future of Credit Unions and was fortunate to have a predominant mix of Groups 2, 3, and 4. I didn’t see anybody sleeping (it was a three-hour session, so I wouldn’t have blamed anybody if they had fallen asleep). And I’m pretty sure none of the CEOs were looking for quick fixes to implement come Monday morning.

After discussing at some length some ideas about what credit unions need to do to succeed in the retail banking industry of the future and change the basis of competition to better compete with megabanks, one of the CEOs asked:

“I don’t see how we get there from where we are now. How do you see this happening?”

My answer: You (and other credit unions) will develop new products and services to do what I’m saying you’ll have to do.

He could have–but didn’t–ask “OK, but how are we going to do that?”

And therein lies what I believe is a huge challenge for credit unions (and banks, for that matter): The lack of new product development capabilities.

An older study conducted by APQC found (oops, I mean claimed) that the “top 20% of businesses” got 38% of their revenue from new products, versus the 28% generated by the “average business.” The study involved companies from multiple industries, but I can’t determine if financial services firms were included (I bet they weren’t). 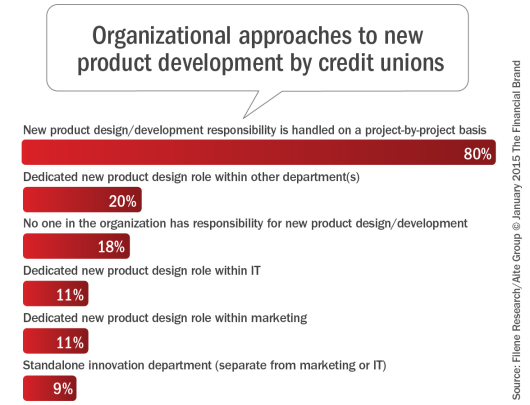 But in looking at the list of the actual products/services that the survey respondents planned to introduce, I was struck by an unavoidable fact: The overwhelming majority–I would put the percentage between 99% and 100%–of the planned products and services were new to the credit union, but not new to the industry.

As you might expect, credit unions who planned on introducing the most new products in 2014 expected to generate a higher percentage of revenue from new products. 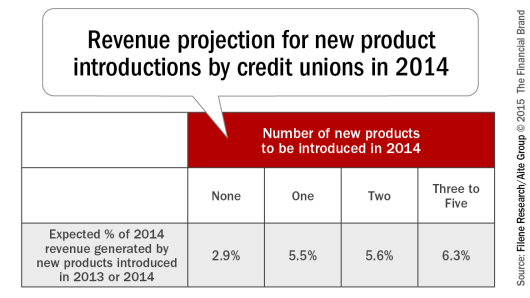 I didn’t survey community banks, regional banks, or megabanks to get their plans, but I’d be very surprised if the numbers were significantly different. In fact–at the risk of being seen as picking on community banks–I’d guess that even fewer community banks were planning to launch new-to-the-bank products or services, let alone new-to-the-industry.

There is no shortage of articles and blog posts heralding every new development from every piddly little start up as being the new source of disruption in the industry. Coin is disrupting the industry! Loop is disrupting payments! Smartwatch apps are disruptive!

How are credit unions (and I would assert, banks) responding? “We have a new credit card!”

Granted, disruption won’t happen overnight, but if the threat is real, wouldn’t you expect incumbents to be launching something new or different to counter the insurgency?

Not that I should really be expecting anything different.  In the survey, we asked respondents how their organization approached new product development. Eight in 10 said they did it on a project-by-project basis. In other words, Janie and Johnny, who were responsible for who-knows-what on the last project, are now in charge of new product development for the new product project. And, of course, they’ll have completely different responsibilities on the next project.

Nearly one in five credit unions said no one in the organization had responsibility for new product design and development. That’s really not surprising, nor necessarily wrong. Many small institutions simply can’t afford to have that function in-house. And they’re not oblivious to the problem: A quarter of the smaller institutions said lack of new product development capabilities is a major problem for their organization, in contrast to just one in 10 credit unions with at least $500m in assets.

But it still begs the question: How is new product development going to get done?

I didn’t ask about new product strategy in the survey, but over the years I can’t tell you how many execs I’ve talked to who say that their organization is a “fast-follower.”

Being a fast-follower requires a competency as well-defined and honed as new product development. Someone has to address the questions: Which new developments should we copy? When should we copy them?

Being a fast-follower does not excuse you from new product development.

But this still leaves the banking industry with a dilemma:

The larger banks (who may have new product development resources) are too big to turn the ship in a timely fashion, and the smaller institutions (who are probably more nimble) have no one who knows how to turn the wheel.

I’m not a big fan of the term “disruptive.” I think it’s overused and–worse–misused. But the demographic shift in the US,  the new technologies being developed and released, and the challenging economic situation and outlook are causing changes in the financial services industry.

Only problem is, very few banks and credit unions appear to be well equipped to do so. Hence, the new product development dilemma in banking.

Did you like this post? Was it helpful? That probably depends on which group you belong to:

And if you slept through this post, but somehow got to this point, thank you for inflating the page view count. Much appreciated.