Gallup released the results of its annual survey on consumers’ perceptions of various industries. For the banking industry, there’s bad news, good news, and surprising news (well, at least, it’s surprising to me).

After a miraculous leap in perceptions from 2013 to 2014, consumers’ views of the banking industry has taken a turn for the worse in 2015. 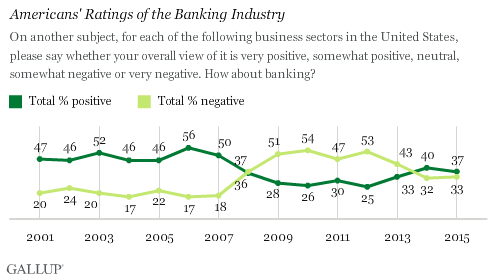 The bad news for the industry is that the positive percentage is receding (much to the delight of Elizabeth Warren, no doubt).

The good news–if you want to call it that–is that banking isn’t at the bottom of the list of industry perceptions. Americans actually have a more positive view of the banking industry than they do of the airline, education, legal, healthcare, pharmaceutical, and oil and gas industries.

At the bottom of the list, with a net rating of -29, is the federal government (to which I’m sure Elizabeth Warren believes is anything but her fault).

What surprised me about Gallup’s findings was that lower income Americans rated the banking industry higher than more-affluent consumers did:

Forty-four percent of Americans whose annual household income is less than $30,000 have a positive view of the banking industry, while 26% view it negatively, resulting in a +18 net rating, based on combined 2014-2015 polling. That compares with net ratings of -3 among middle-income Americans (35% positive, 38% negative), and +2 among upper-income Americans (37% positive, 35% negative).

This certainly runs counter to the claims of some politicians (yep, like Elizabeth Warren) who like to claim that the banking industry is hurting lower-income consumers. Maybe lower-income consumers are too stupid to know they’re being hurt by the industry? Feel free to argue for that interpretation. I won’t.

What It Means (to Banks and Fintech Startups)

My take #1: There is no factor more important for impacting the potential success of fintech startups than consumers’ perceptions of the banking industry.

If consumers’ view of the banking industry improves, then fintech startups pursuing a direct-to-consumer strategy will suffer. Those pursuing a B2B strategy (i.e., partnering with, or selling to, banks) will prosper.

If consumers’ view of banks continues to erode, then the opposite effect will happen: Direct-to-consumer startups will benefit from the increasingly negative view of banks, and startups partnering with banks will be negatively impacted.

My take #2: Fintech startups may miss their opportunity to capture the market.

Gallup didn’t report on the differences in perceptions–if there were any–across the generations. Bummer.

It’s hard for me to believe, however, that the industry could have achieved the stunning near-turnaround that it did in 2014 without big support from Gen Yers. That is, I don’t believe that Gen Xers, Boomers, and Seniors could have accounted for the shift in perception.

If younger consumers’ perceptions of the banking industry are rising–as I believe they had to between 2013 and 2014, and is supported by the finding that lower-income consumers have a more generally positive view of banks than higher-income consumers (who are typically older)–then fintech startups are missing an opportunity to capture the market.

My take #3: We’re at the real inflection point in fintech.

Much like the social media gurus from six or seven years ago–who erroneously blew a lot of smoke about how social media was going to disrupt and transform business–the fintech disruptophiles of the past couple of years have preached that banks are dead (or dying). For better or worse, it’s not happening.

While the major Internet players have grown $175 billion in deposits in the past six years, the banking industry overall has grown $2.85 trillion in deposits, meaning these major digital players have garnered approximately 6% of deposit growth in the past six years. This is impressive performance from these players, but it’s not the equivalent of Netflix taking down Blockbuster or Amazon taking down book stores. In the same period that the Top 10 Internet only banks grew deposits by $175 billion, three megabanks–Chase, Wells and Bank of America– grew deposits by $1.27 trillion.

The fintech startups’ free ride is over. The inflection point is about placing bets on what strategy will prove to be most successful: Direct-to-consumer or B2B (partnering with/selling to banks).

With social media channels basically becoming traditional “pay-to-play” channels, scaling through Facebook and Twitter for free is not an option for today’s startups.

Which means fintech startups can’t play both sides of the strategy fence.