In the annals of the Harvard Business Review, Marketing Myopia by former HBS prof Ted Levitt, is a classic. As HBR puts it, the article:

“Introduced the question, “What business are you really in?” and with it the claim that, had railroad executives seen themselves as being in the transportation business rather than the railroad business, they would have continued to grow. The article is as much about strategy as it is about marketing, but it also introduced the most influential marketing idea of the past half-century: that businesses will do better in the end if they concentrate on meeting customers’ needs rather than on selling products.”

My take: This concept of myopia is a big problem facing banks today. The problem isn’t about being “digital.” It’s about misunderstanding how the business is changing, what business they need to be in, and how the business model needs to adapt.

In a recent survey of credit union executives conducted by Aite Group and Filene Research (which Filene will publish in the near future, so be on the look out for that), when asked about their new product and service initiatives for 2014, the overwhelming number of responses related to traditional products and services (i.e., checking accounts, credit cards, mortgages, car loans).

In other words, coming up a new flavor of a checking account, or a variation on a mortgage or car loan is what many of these executives see as “new” or “innovative.”

You would have a hard time convincing me that a survey of community bank execs would produce significantly different results. And while I do believe that the largest banks are exploring non-traditional opportunities, those innovation initiatives are like small cabins on huge ocean liners.

Yet, when I read blog posts and white papers, the focus seems to be on “becoming more digital” or “accelerating innovation.” Becoming more digital, like offering mobile account opening is not a long-term strategy if the concept of an “account” is going to radically change (i.e, go away). And innovating without a clear idea of what the strategic goal is, is kind of wasted effort, no?

The problem with banking execs is analogous to the problem the railroad execs, described in HBR’s Marketing Myopia, had: How they define their business.

Bank execs predominantly see banks as being in the “money movement” business.

This explains the current obsession with mobile payments, and how the world of payments is changing. The pundits all yell and scream about how every new payments-related announcement is going to disintermediate banks and put them out to pasture, or cause them to become extinct.

Got news for you (and you won’t agree this): Payments are a losing business (for banks).

An astute student of business history would understand this. In industry after industry, the ability for any company to sustain revenue growth from transaction processing is a losing proposition. Advances in technology continue to push the cost of transaction processing near zero, and in the absence of any added value to the processing of a transaction, companies can’t sustain growth.

The current upheaval in the payments business isn’t really about mobile technologies, it’s about cost.

As consumers’ payment behavior shifted from cash and checks to cards (both credit and debit, but predominantly to debit), retailers’ and merchants’ transactions increased. The purported “value-add” was improved risk management and faster money movement, but retailers and merchants either don’t see those benefits, or refuse to see those benefits.

So it’s great that there are innovators coming along to change the world of payments. And it’s hardly surprising that retailers and merchants would want to adopt payment mechanisms that will undercut the existing payment networks.

But what happens in 10 years if and when PayPal is the dominant payment network? Guess who the next target of change is. The bottom line here is clear: Making money off transactions–or as the banks see it, money movement–isn’t a sustainable business model.

This is hard for bankers to see, or to accept, because–today, at least–there’s no money to be made in the money management business. With monthly fees for just keeping a checking account open, and penalties for bad account behavior that could triple or quadruple the monthly fees, consumers simply aren’t willing to pay for money management capabilities.

Furthermore, the money management capabilities that are offered today aren’t worth paying for, as far as many consumers are concerned. Budgeting and expense categorization? Eh.

It may be hard to see today, with the abysmal state of the economy and prevalence of Gen Yers without a lot of money to spend, but better managing money is consumers’ biggest financial services-related problem. It isn’t moving money.

Borrowing money (the lending side of banks’ business) is just one part of the money management problem. Consumers don’t want to borrow money, they need to. Mark my words: You will always make more money by providing what consumers want than what they need. Sure, they’ll pay for what they need, but will look to minimize that expense. Serving their desires, on the other hand….

And make no mistake about it. Despite the sorry state of the economy, we spend money like it’s going out of style (oh wait, maybe it is). In the 20-year period from 1992 to 2012, real retail spending (seasonally adjusted) increased ~50%, completely recovering from the dip experienced during the recession. 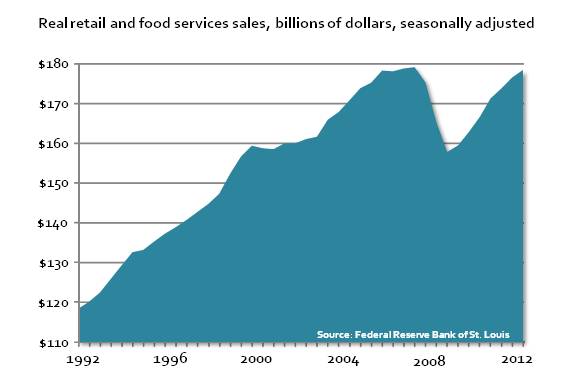 With retail sales exploding, and the number of retail sales transactions with it, it’s little surprise that retailers and merchants would rebel against transaction fees (i.e., interchange).

The drivers of consumer change, however, usually fall into some combination of two categories: Cost and convenience. Although retailers and merchants pass interchange fees through to consumers, consumers don’t perceive this very clearly. And the added convenience of mobile, or alternative, payment mechanisms is not clear to a lot of consumers.

Start-ups like Simple and Moven seem to get this. I say “seem” because sometimes I’m not sure if they see their differentiation as “mobile” or “money management.” Mobile isn’t a differentiator. It’s simply an access or transaction channel. Ho hum.

But with features like Simple’s “safe to spend” and Moven’s real-time digital receipts and money tracking, the startups are showing the industry signs of what money management could look like. Mobile is simply the mechanism by which these features are delivered. The value, however, is in the feature, not the choice of device.

Banks have been given a lot of grief over the past few years for being slow, out of touch, whatever. Lots of pundits seem to think they’ll disappear like the dinosaurs in the next few years.

I guess that view sells books and drives page views.

But I’m not nearly as pessimistic. Why? The opportunity for customer advocacy (i.e., to be an advocate for the consumer, not this stupid net promoter score, “get the consumer to advocate for us” nonsense).

Retailers and merchants offering mobile wallets to facilitate payments aren’t doing so for the benefit of consumers. They’re doing so to drive sales. Is a merchant or retailer really going to you its product or service isn’t the best? Or that there’s a better price somewhere else? Or that you can do better by using a payment mechanism that charges the retailer a higher interchange fee?

In addition, with yet another data breach announced this week, how long will it be before consumers lose confidence that retailers and merchants can be trusted with any personal, confidential, or sensitive data?

Bottom line: The opportunity for banks (and, in particular, credit unions) to position themselves as customer advocates is huge. Unfortunately, so is the shift in mindset needed to move from seeing the business as “money movement” to “money management.” It’s this myopia that’s slowing banks down–not the technology.

The path to success in banking isn’t about moving money faster (sorry, Walt). It’s about developing products and services that will help the next generation of bank customers better manage their (hopefully) growing amount of money–and that they will (more willingly) pay for these products and services.