The Great Recession has had a lasting impact on consumers — especially those in their 20s and those ages 60 or higher — though in very different ways. According to a study from TransUnion, the borrowing capacity for younger consumers is being swamped by their student loans. Combined with overall lower credit scores for Millennials, this has significantly depressed mortgage and credit card borrowing. Meanwhile, the highest overall loan demand is currently in the 60+ age tier, with particular growth in mortgages.

The impact of student loans has been felt by all age groups, not just the youngest segment. As of 2014, student loans comprised 7.0% of the consumer wallet for all U.S. consumers ages 20 and over (among those with loans of any type). In 2005, they accounted for just 2.8% of the overall consumer loan wallet. From a dollar perspective, the average student loan balance per consumer with one or more student loan accounts jumped from $17,442 in 2005 up to $29,575 in 2014.

“The mortgage crisis and recession had a profound impact on the country, with many consumers still feeling the effects today,” said Charlie Wise, co-author of the study and vice president in TransUnion’s Innovative Solutions Group. “With unemployment rates remaining high for a prolonged period during the last six years, 20-somethings likely looked to their parents, grandparents, and other more financially established family and friends for financial support.”

The biggest declines in wallet share for consumers ages 20-29 are in mortgage loans and, to a lesser extent, credit cards. 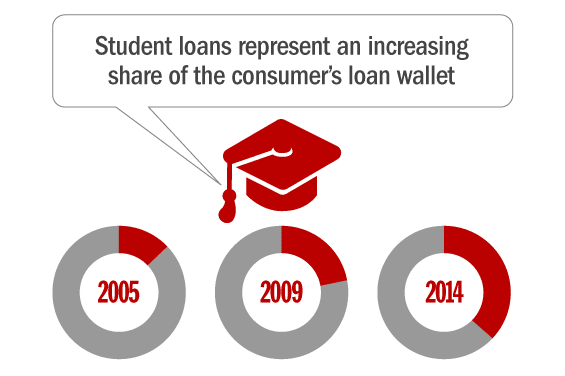 “The rapid rise in student loan debt for younger consumers has occurred while the shares of all other loan types except auto has dropped, indicating that student loans may be crowding out most other loan types,” said Wise. “Additionally, younger consumers have found during and soon after the recession that it is more difficult to gain access to credit cards and mortgages, further pushing the decline in those balances.”

Conversely, older consumers have seen loan growth in every key lending category. While average mortgage balance per borrower declined about 2% for the overall adult population between 2009 and 2014, consumers 60 and over are the only age group to see a rise in average mortgage balance. This growth in average balances for consumers age 60+ was also seen in auto and HELOC accounts, while average card balance per borrower for this oldest tier has grown since 2011.

Surprisingly, the 60+ age group has seen a rise in student loan debt similar to the one observed for the 20-29 age group. While the incidence of student loans among 60+ consumers remains below 5% in 2014, average student loan debt per borrower with a student loan has risen from $14,696 in 2005 to $27,168 in 2014. The study also found that 48% of these loans include a senior consumer as a co-signer.

“The increase in student loans by the 60+ age group and the significant incidence of co-signed student loans points to the fact that many older Americans are participating in loans to help family and friends,” said Wise. “It’s likely that many of the people they are helping are in difficult financial situations or may not qualify for student loans on their own due to poor credit health or insufficient credit history.”

The study also found that the 60+ age segment is the only one in which prime borrower mortgage participation — the percentage of consumers with a prime or better credit score who have a mortgage balance — has increased since 2009, moving up from approximately 27% to 32% in 2014. All other age tiers saw a reduction in prime borrower mortgage participation rates over that span. Participation rates in other loan categories — credit card, auto and HELOC — increased for age 60+ consumers over that time as well.

Older consumers have been able to access higher borrowing levels in large part because the 60+ age tier has the strongest risk profile of any of the age groups.

“The increase in loan originations and borrowings by consumers ages 60+ is both encouraging and a source of concern,” said Wise. “The proceeds of increasing senior borrowings may be used for their own spending as well as to assist family members in supplementing their incomes and making purchases. At the same time, rising debt levels by older consumers could lead to increased default rates if they are unable to meet higher loan payments with their often fixed incomes. This development certainly bears watching over the next several years.” 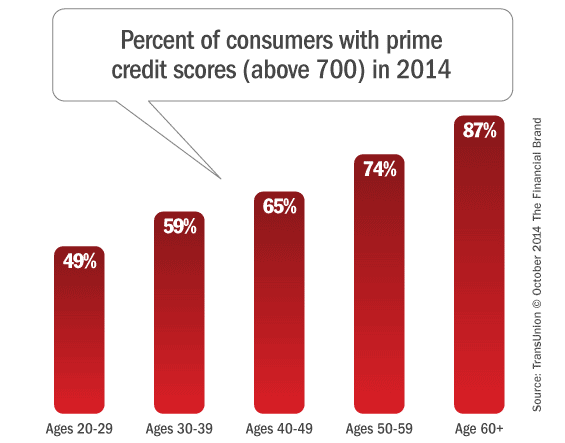 “Some lenders, who previously would not target older consumers, may find that they are a more attractive group from a lending perspective,” said Wise. “With an increased demand for borrowing and an appealing risk profile, older consumers now represent a desirable market for lenders looking to grow. Moreover, the increased spending by older consumers and their families from these borrowings may help the economy continue its recovery.”