Subscribe Now Get The Financial Brand's FREE Email Newsletter
The Federal Reserve’s long-promised FedNow real-time payments service is on track to go operational in 2023, prompting thousands of banks and credit unions to strategize about when — not if — they will offer it.

Real-time payments, now mostly the purview of larger financial institutions through a program from The Clearing House, will soon become more accessible to thousands of smaller banks and credit unions, once the Federal Reserve’s FedNow system goes mainstream in 2023.

In the works for years, the Fed now has published the planned FedNow pricing schedule, finalized its rule governing FedNow, and launched a pilot program with 120 financial institutions.

“The FedNow Service pilot participants, including financial institutions of all sizes, processors, and correspondents, have been working hard at every step of this journey,” said Nick Stanescu, senior vice president and business executive of the FedNow Service. “Though much work remains, this progress sets the stage for thousands of financial institutions to be up and running with instant payments in the near future, including those that work with third-party payment providers.”

These developments have accelerated the discussion of real-time payments in general, raising such questions as: Why have them in the first place? Where do they stand now? and How do industry analysts forecast their development?

With Another Option, Adoption Will Soar

In its Prime-Time for Real-Time report, ACI Worldwide projected that real-time payments in the United States, which accounted for just 1% of all transactions in 2021, will rise to 4% in 2026. “Despite the relatively small transaction share of real-time payments in the U.S., they have the ability to formalize a relatively large level of informal economic activity,” the report states.

By “Informal economic activity” ACI refers to “economic activity that traditionally occurs beyond the jurisdiction of formal institutions’ frameworks, through reducing cash usage.” In other words, this could include relatively low-value transactions between people, consumers and small businesses. ACI helped connect and deliver test messages over a pilot version of the FedNow service.

One analyst says the real-time payments market will have a CAGR of nearly 30% through 2026.

Mordor Intelligence predicts the compound annual growth rate for the real-time payments market will be 29.8% from 2021 to 2026. “Individuals expect to be able to make a payment anywhere and at any time, including during evening hours, weekends, and on public holidays,” it says in a report.

“They also want to be able to pay for and receive their purchases as fast as possible. Suppliers, on the other hand, want the certainty of payment as soon as they release their goods and services,” the Mordor report states.

Read More: Banks Must Prep for the Disruption (and Promise) of Real-Time Payments

The Clearing House Responds to FedNow

As FedNow gains traction in the real-time payment space, The Clearing House, which launched its Real Time Payment system in 2017, has taken notice, despite its head start.

“Clear sides have been drawn,” says a report by PwC. “Larger banks tend to oppose a new system given their investment in the alternative TCH system while smaller banks, credit unions, and nonbanks (FinTechs, retail, technology) tend to be more supportive.” One of the fintechs that has expressed interest in FedNow is Block (formerly Square).

In one move that opens up the RTP option to smaller institutions, Fiserv, through a partnership with TCH, says its clients can now access the RTP network through the NOW Gateway and offer Zelle peer-to-peer payments, gig worker payouts and bill payments. 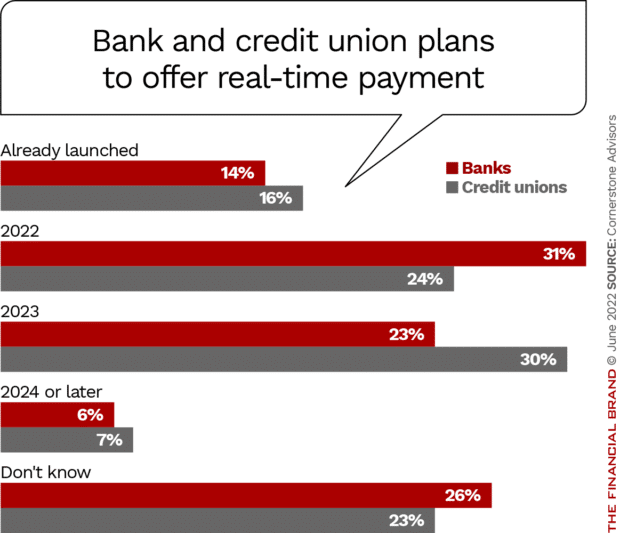 The FedNow pricing schedule is as follows:
A $25 monthly participation fee for each enrolled routing transit number; a fee of $0.045 per credit transfer, paid by the sender; and a fee of $0.01 for a request for payment message, paid by the requestor. The planned credit transfer transaction value limit will be $500,000, although participants will have a default limit of $100,000, with the option to adjust it up or down.

“Instant commerce is the new e-commerce,” says a commentary by J.P. Morgan. “It is not just limited to consumers. Creators and gig workers want to be paid instantly. This means daily or even hourly payroll could become a reality. In such a world, daily mortgage payments or tax payments wouldn’t be inconceivable either.”

The issue of security in the FedNow system has raised red flags from some consumer groups. “The Fed must take measures before FedNow launches to ensure that it does not become a haven for fraud,” says a joint statement by the National Consumer Law Center, National Consumers League, and National Community Reinvestment Coalition.

The Fed has been advised to focus on ways to mitigate fraud before going mainstream with FedNow.

In the Fed’s 95-page final rule implementing FedNow, scant attention is given specifically to fraud issues. It does allow financial institutions additional time to determine whether to accept a payment order when there is reasonable cause to believe it is related to fraudulent activity. It also says that FedNow is intended to adopt “fraud prevention tools” such as “the use of algorithms or other codes, identifying words or numbers, encryption, callback procedures, or similar security devices.”

However, the rule qualifies this by saying “Over time, the Reserve Banks will augment fraud prevention tools as the FedNow Service matures.”

“The notion of `faster payments’ tends to stoke fears for `faster fraud,’” says the PwC report. “For faster payments to reach sustainable, mass-scale adoption, fraud management capabilities will need to be enhanced.”

The Clearing House announced that it will make available to its 250 or so subscribing financial institutions tokenization for deposit and checking account information transmitted on its RTP and ACH networks. “Tokenization for customer account numbers, which replaces the actual account numbers with a token, is another step financial institutions can take to make their customers’ accounts even more secure when making payments,” says Jim Aramanda, president and CEO, TCH.

TCH has been working on this in limited real-world tests since February of 2022. “There are vaults of data out there,” said Jeff Williams, a senior vice president at TCH. “Banks have that data sitting there, housed somewhere. It’s still at risk. We think encryption plus tokenization is the right way to go.”