Subscribe Now Get The Financial Brand's FREE Email Newsletter
According to a ranking of traditional and fintech financial providers, both Millennials and Gen Z agree that digital competence is a must. But beyond that, the two generations tend to see many aspects of the financial industry differently.

In marketing, the concept of “relatability “— meaning, at the simplest level, being easy to understand and feel connected to — is more often used at the campaign level than at the brand level, where it can be harder to quantify. Nevertheless, if people can’t relate to a brand, it may never even be considered.

This is a problem for banking brands, because “relatability” correlates directly with someone’s level of trust — a core factor influencing any financial relationship.

According to a new research by BrandCap, consumers only find one in four banking brands relatable. Out of all the financial institutions studied, the top four were Marcus, Venmo, Finn, and JPMorgan Chase (the only traditional banking brand). Coming in last were HSBC, Navy Federal Credit Union, TD Bank, and Wells Fargo.

On the surface it would seem that effective use of technology might be the primary differentiator between the high- and low-scoring institutions. But David Martin, U.S. Chairman of the BrandCap consultancy, sees it differently.

“While new technology is accelerating the number of tools that can be used in developing a consumer experience, without creating a relatable connection with your audience, those investments are dollars wasted,” he explains.

In addition to the survey of U.S. consumers ages 18-34, the index was based on conversations with Millennial and Gen Z consumers. “These people represent future growth opportunities and have markedly different attitudes towards finances and financial service organizations than previous generations,” says Lindsay Beltzer, Director at BrandCap.

“Without relatability, there is no consumer experience. Relatability drives consideration.”
— David Martin, BrandCap

Consumers’ experience with a brand — both directly and through the influencers they listen to — is important in answering that question, Martin states.

“But without relatability, there is no consumer experience,” he maintains. “Relatability drives consideration.”

BrandCap says that relatability in the banking industry is built upon four steps:

How a brand brings these components to life — through content, messaging, tone of voice, visual expression, user interactions (online and off), and through other experiences — is vital to building an emotional connection with consumers and to creating relatability, according to Beltzer.

Among younger consumers (18-34), newer, primarily digital financial brands are far more relatable to their lives than more established brands. In some respects that shouldn’t be a surprise as Millennial and Gen Z consumers expect a great digital experience. But there are some surprises in BrandCap’s list.

Note that the ranking is only of the 16 companies shown (i.e. No.1 is “best” and No. 16 “worst”). “We chose these companies based on a set of hypotheses we wanted to test between insurgent brands, traditional financial service brands and credit unions,” Beltzer tells The Financial Brand. “We did not intend for this version of the study to be representative of the whole market.” She says the firm plans another study that will include a larger mix of brands.

The ranking in the table below is based on a composite of the highest scores across each of the four attributes described above (competence, empathy, character, confidence). 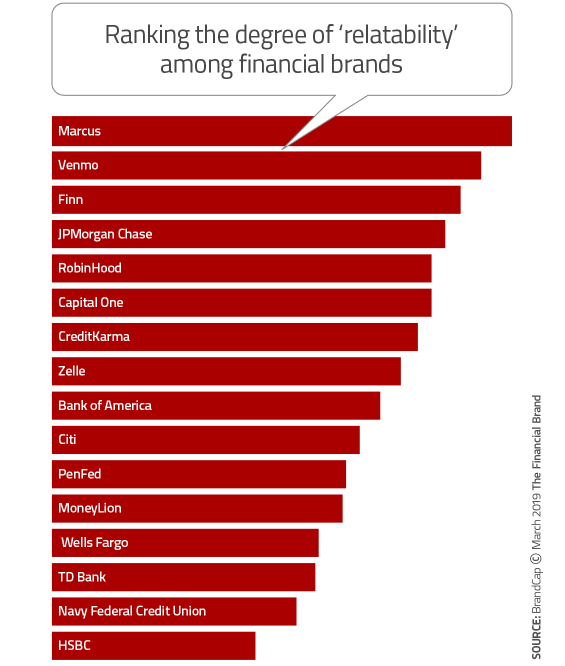 Popular ‘Vampire Squid’ (and Other Surprises)

Given that this was a survey of Millennials and Gen Z consumers, the high relatability scores of digital-only brands Marcus, Venmo and Finn could be expected. However, Finn’s high finish is notable given that it only rolled out nationwide in mid 2018.

BrandCap’s overall take on the top three: “Double-digit scores above the index median on ‘Competence’ and ‘Character’ were the biggest drivers of relatability. These digital-savvy brands are relating with this age group by meeting, and often exceeding, their expectations.”

Some might wonder: How is it that Marcus, the Goldman Sachs online bank brand, grabs the top spot based in part on a higher-than-average score on “Character”? Millennials came of age during the financial crisis and at least some of them must have been aware that Goldman Sachs was reviled as the “giant vampire squid” in media coverage following the crisis.

Beltzer says BrandCap analysts were actually surprised by Marcus’ high ranking. When they dug into the data, they found that its strong performance was due to the fact that the younger Gen Z respondents over-indexed on the “Character” and “Confidence” components of the score — statements such as “really gets me,” “reflects my values,” “brand I can trust” and “delivers on its promises.”

“This masked a broader story,” Beltzer says, “which was that for Millennials, Marcus performed at or slightly below the median for almost all of those statements, most likely due to the fact they lived through the financial crisis and read those headlines ten years ago.”

Another surprise was that Zelle, which in 2018 surpassed Venmo in value of transactions (by some measures), trailed the fintech app in its relatability score. Beltzer’s observation is that “Venmo has created a real community of users and its social feed makes money transfer more enjoyable, shareable and entertaining for audiences, while Zelle is more of a transactional method of money transfer. Millennials see Venmo as a brand that ‘understands my changing needs’ and is ‘shaping the business of financial services’ and ‘innovative.’”

The research further revealed that the mindsets of Millennials and Gen Z are at odds with the business models of traditional financial brands.

BrandCap’s research confirmed what other researchers have noted. Members of Gen Z (ages 18-24) and Millennials (ages 24-36) view the world of financial services very differently. Gen Z wants a financial services provider to reflect their values and respond quickly to their changing needs. Millennials, meanwhile, prioritize ‘Competence’ and ‘Confidence.’ They want a brand they can rely on and that delivers on its promises, according to the consulting firm.

As a result, the relatability “winners” differed within each age group. For Generation Z, the most relatable financial providers included Marcus and Finn. But for Millennials — a majority of whom still want the option to visit a branch — the choices included JPMorgan Chase and Capital One, much more traditional and established brands. Both demographic groups like Venmo.

Even though this particular project was limited in the number of institutions included,  Beltzer says “relatability drives consideration which is a driver of performance.” Further, Millennials and Gen Z audiences are the future customers and wealth drivers for all organizations.

Convenience and flexibility are key. Banks and credit unions should use consumer input to examine how digital and real-world experiences are impacting relatability and iterate quickly based on what they find.