Over the last year, the percent of consumers using personal financial management (PFM) tools hasn’t changed. But that doesn’t mean interest in PFM is slipping. PFM tools are proving to be an increasingly effective selling point among consumers looking to switch institutions. In fact, 46% of bank account shoppers under 30 said they were interested in PFM capabilities, vs. 21% of those shoppers ages 50 or older.

In May 2014, over 3,000 active bank shoppers participated in the BankChoice Monitor survey fielded by Novantas exploring the role and usage of PFM, and how important this feature was to consumers considering a new bank or credit union. Responses from a similar study in April 2013 and May 2014 were compared. Among consumers shopping for a new bank or credit union checking account, interest in PFM tools overall grew year-over-year by 19%. 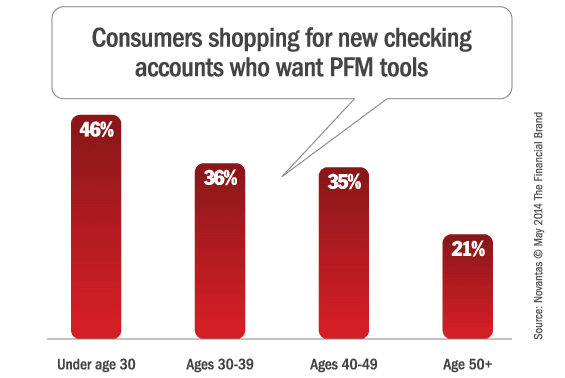 Results from the survey also revealed that:

Most PFM users rely on third party tools, not their current institution. Many banks and credit unions do not offer PFM tools to customers, so many consumers use third-party sites like Mint. Overall, 32% of respondents use PFM services or software to manage their finances, but only 28% of these PFM users said they use their bank or credit union’s site for personal financial management.

Third-party PFM users would like their primary banking institution to provide PFM. While 72% of respondents that use PFM tools do so on third-party sites, over 40% of these respondents indicated they would prefer to use these tools on their bank’s or credit union’s site or mobile app.