Subscribe Now Get The Financial Brand's FREE Email Newsletter
Siloed systems, plus high branch traffic, led to frustrated members and staff at a Midwestern institution. An online scheduling system was added to improve customer experience, and did, but an unexpected byproduct was a big boost in new accounts and new loans from both current members and a surprising number of prospects.

Sending out a branch-wide instant message saying, “The guy in the red shirt in the lobby wants to open an account” was one credit union’s attempt to stay ahead of chaotic branch traffic.

“It probably wasn’t the most effective solution,” concedes Alex Cornelius, VP of Retail Strategy at Lake Michigan Credit Union, which has 430,000 members and 50 locations in Michigan and Florida. On the other hand the problem was a good one to have — coping with busy branches. LMCU is a tech-savvy institution, yet Cornelius says it’s common at some of the credit union’s busier branches to have 10 to 20 people in line to see a teller, with desk staff also being busy. He says this led to many complaints about long waits.

“Members were happy once they were served, but they told us they felt we could do better about serving them quicker,” says Cornelius.

Heavy branch traffic wasn’t the only cause of the delays. Cornelius says organizational silos also contributed. There wasn’t a lot of coordination, for example, between the credit union’s lending call center and its branches. “The call center would take applications over the phone and schedule loan closings at the branch,” Cornelius states. “They were essentially blindly scheduling those closings because we didn’t have a calendar or a system in place to let them know when the branches were busy.”

Out of Chaos, a Better Consumer Experience

Online and mobile scheduling apps are commonplace in many industries and while not new in banking, are far from commonplace. Lake Michigan Credit Union decided it was time to explore the option. One too many complaints had reached the corner office.

The $6.4 billion-assets credit union was used to building some solutions internally but opted to go with a specialist vendor in this case. A scheduling application would have to work with systems in different department — initially Retail and Mortgage, Cornelius states, which made it a more complex project. The vendor selected was TimeTrade.

The solution enables members and nonmembers to schedule appointments on LMCU’s website or on its mobile app. It gives people the ability to self-manage appointments and enables the institution to communicate by email or text with consumers who have made appointments. A name and email are required to make an appointment but the consumer has to opt-in to receiving texts.

Cornelius, along with Cimarron Buser, SVP of Business Development for TimeTrade, described details of the appointment system during a webinar hosted by The Financial Brand. A “Schedule Appointment” link appears at the top of the credit union’s website. Clicking takes the person to a microsite where they start the scheduling process. The system can be customized and LMCU set up four scheduling categories, including home loans. Clicking on one of these choices leads to further options including whether to set up a phone appointment or an in-person appointment. (Most consumers choose the latter, says Cornelius.) If in person, the consumer chooses the location and then on a calendar, selects the date and an available time. 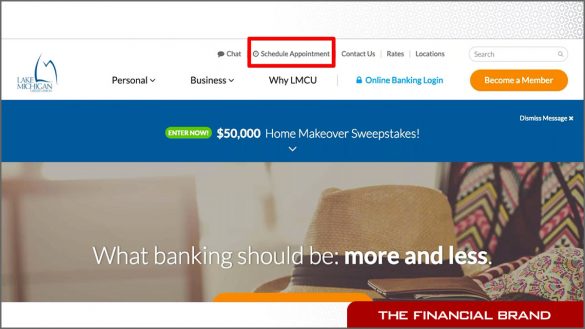 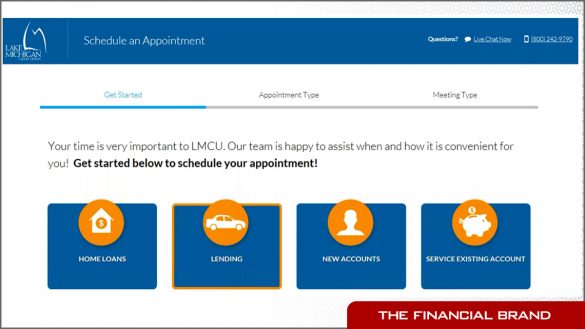 During the webinar, Cornelius showed listeners an example of what LMCU staffers see. The dashboard — appearing on the screens of tellers, managers and desk staff in branches, and on desktops of staff in the mortgage lending center and call center — shows what appointments are scheduled, what’s in progress, and details of specific appointments. Either a branch staffer can click the “check in” button on their dashboard when a consumer enters for an appointment, or the consumer can check in themselves on a small kiosk (in some branches), if no staffer is available. Either way, branch staff know that an appointment has arrived. 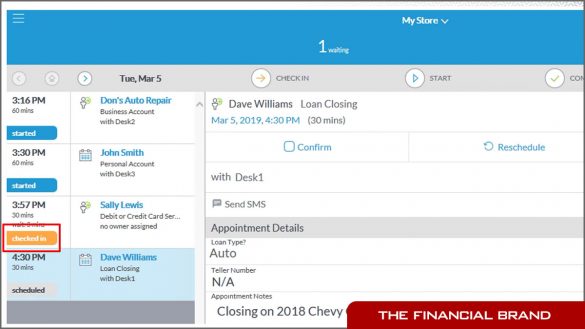 Given the previous absence of lobby management, Cornelius says branch managers love the new system. “They can see who’s already being assisted and by whom. Who has checked in but is waiting, and what appointments are coming up,” Cornelius states.

“One of my concerns was that we’d have people just scheduling to service their account — ‘I need help with online banking,’ that kind of thing,” says Cornelius. “We want to service them, but we were hoping to generate new business opportunities.”

That has proved to be the case in spades. Nearly 85% of the appointments have been for new business opportunities, the credit union executive reports. They break down as follows:

Perhaps even more significantly, 25% of the appointments came from prospects — consumers who were not members of the credit union. “It’s a new channel for us, for opening up new business opportunities,” Cornelius states.

“We’ve also been tracking deposit shares,” he continues. “We were able to get over 300 checking and HSA [Health Savings Account] shares from new members in those first eight months. And that’s just from the ones that scheduled their own appointments, not walk-ins.”

Although the appointment scheduling system in use by Lake Michigan Credit Union has brought numerous benefits, Cornelius says the data from all the interactions in the system contain a wealth of information.

“We have so much data, we’re just starting to tap into it with our analytics and business intelligence team,” he states. One example: Seeing which branches have longer-than-average wait times after a member checks in. Once they mine it, this data is going to make them much more efficient as an operation, says Cornelius. Already 18% of total member interactions result from scheduled appointments.

“Google provides appointment booking for lots of different services including things like haircuts and spas and restaurants,” says TimeTrade’s Cimarron Buser, “but they opened it up the financial industry.” It’s a way to further expose the fact that a financial institution accepts appointments and can be used for organic marketing.

“We jumped on the chance because we thought it offered potential for more new leads,” Cornelius states. He reports that in just the pilot phase the credit union has had 250 to 300 new customers book through Google, of which about 30% have been prospects — an even higher percentage than what they’re seeing on their website scheduling.