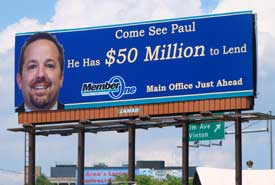 Paul Economy, that is (yes, that’s his real name). Economy, a VP and manager of a Member One Credit Union branch, is the star in his employer’s latest ad campaign.

“Come see Paul,” the headline on the billboard reads. “He has $50 million to lend.”

This deceptively simple concept may not be the sexiest campaign in the world, but it’s super smart and strategic. In our new, deleveraged economy where lenders are evaporating and capital is tight, Member One looks like the only financial institution out there with money to lend. Meanwhile, everyone else is slugging it out for deposit dollars.

This demonstrates one of the Fundamental Theorems of Branding:

Zig when everyone else zags.

The Roanoke Times reports that the campaign generated “multimillions” in loans in its first month, a dramatic increase from previous months.

The campaign doesn’t specify any particular type of loan. It applies to all loans – auto, personal, mortgage and home equity.

Brad Boothe, AVP/Marketing at Member One Credit Union, said that the credit union is able to run this kind of promotion because it’s not in same the situation as many other lenders with high default rates on loans.

In an interview with The Financial Brand, Boothe said, “We have lent a lot but we still have plenty more. The $50 million was used more for impact than actual money to lend.”

“The well’s not running dry,” he said.

The campaign, including print, radio and in-branch components, will run through August.

:30 Seconds on Paul Economy
– Paul has worked for Member One for 21 years.
– He is 43.
– He is a native of Roanoke, Virginia, where the credit union is based.
– He recently returned from a mission trip to the African nation of Malawi.
– Paul serves as the president of the Roanoke Ballet Theatre Board of Directors.
– He’s a member of the Rotary Club of Roanoke and the Roanoke Regional Chamber of Commerce.