Subscribe Now Get The Financial Brand's FREE Email Newsletter
Financial institutions score well overall among small and midsize business owners. One big caveat: The best results come from the largest and the oldest firms. The huge crop of pandemic startups — the 'Covid class'— are less impressed with their banking providers. New data provides a roadmap for how financial marketers can attract and keep these digitally focused newcomers.

Bankers will no doubt smile over some of the data from a survey of 1,400 small and midsize business owners about their banking use. For once fintechs didn’t dominate and some of the findings for traditional financial institutions were downright dominant.

One striking example: More than nine in ten small business customers get all their financial services from one institution, and prefer to get it that way. This contrasts sharply with retail banking, where things are quite different. Increasing fragmentation of financial relationships is occurring among consumers given the proliferation of choices people now have. That raises the question: Are things really that different in the small business market?

Perhaps not as different as they may appear. For one thing, there is a certain lag time between consumer banking preferences and those of businesses, which generally have much more complex needs.

There is no demarcation now between consumer and business expectations. We’re in the customer expectation economy.

A second factor is that the survey — conducted by The Cargo Agency, a b2b marketing firm — found some weak spots in financial institutions’ armor, and some distinct differences depending on the size of the company, how long it has been in business and the age of the owners.

Third, and possibly most significant, the pandemic, ironically enough, spawned an enormous bumper crop of new businesses. Many of them, being digital from the get-go, fared well despite lockdowns, shortages and volatile demand for products and services. In fact, according to the survey, 45% of the respondents were not impacted by Covid at all and an additional 31% were doing better after the shutdown period. (The quantitative part of the survey was conducted in March through May, 2021 and included respondents from both the U.S. and Canada.) 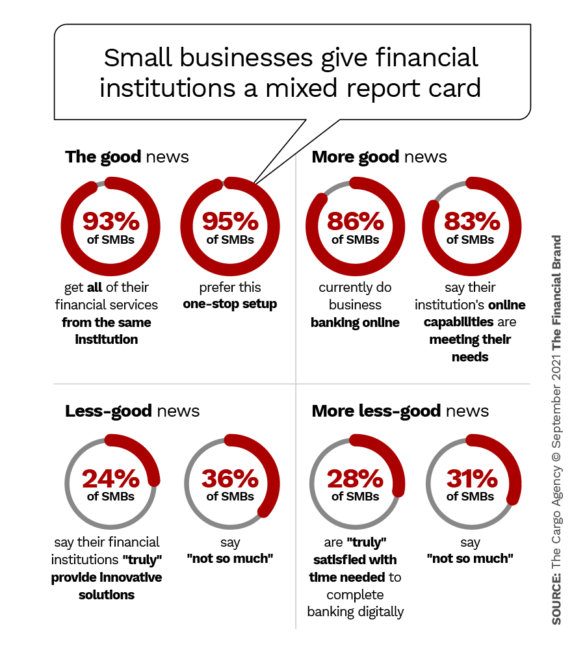 A Wave of Millennial and Gen Z Business Owners

“A four-decade decline in business starts was reversed in 2020-21 as about ten million businesses started up in the U.S.,” observes Dan Gliatta, Founder and Chief Growth Officer at The Cargo Agency. “They’re a new breed,” he adds. While many established businesses have had to pivot digitally coming out of the pandemic, these newcomers don’t need to pivot because they were “born with digital in their DNA,” Gliatta tells The Financial Brand.

Even if these young adults are not all business owners, they have an influence on decisions about who the company does business with, Gliatta maintains, including financial services. “They paid a lot of attention to how the brands behaved during a pandemic around supporting small business and supporting people in general,” he adds.

This youthful age wave could impact the very strong preference for dealing with one financial institution identified in the survey. “The new workforce is driving many startups to look for nontraditional banks,” Gliatta observes. “They are definitely leaning more towards what I would call ‘non big-bank’ relationships,’ or at least not solely dependent upon one relationship with a big bank.”

The survey data points to some reasons for this potential realignment.

In the chart above, the data reflects the entire sample, but in some cases there were significant differences between the smallest SMBs (fewer than ten employees) and the largest (50 or more employees). For example, in the case of “providing innovative solutions,” 39% of smaller firms felt their bank did not do that, compared with 25% of large SMBs that felt that way. Also, 76% of the larger SMBs were satisfied with their banking provider’s customer support, but only 65% of the smaller SMBs felt that way.

“Large businesses have a tendency to feel that they are getting good value from their banks, while the smaller ones feel like they’re getting a little bit lost in the shuffle,” Gliatta observes.

Most large SMBs seem happy with their banking provider. Investigate the experiences they like so you can see what your missing with smaller customers.

Cargo tracked Net Promoter Scores among various categories of the SMB sample and found sharp disparities here as well. (NPS, which measures whether your customers are promoters or detractors is expressed in numbers ranging from -100 to +100.) Below are NPS figures from Cargo’s survey .

“If one thing should ring loud and clear from these numbers, it’s that smaller SMBs are feeling left behind by your customer support and offerings.”

Financial institutions as a general rule have not loaned to startups, as it is considered too risky. They would handle checking, merchant services and other needs, of course, but would wait until the startups “grew up” to lend beyond a business credit card. Increasing competition from nonbank lenders using models powered by artificial intelligence would seem to put pressure on this risk-averse approach.

The Cargo survey found, however, that just 8% of all SMBs looked to nontraditional lenders during the pandemic (at least through Spring 2021). Gliatta admits he found that low figure surprising, but points out that 15% of respondents used government loans, which was a significant and temporary option. A solid 58% used “only bank lenders.” (“Receivables/factoring” at 20% and “Non-private equity financing” at 19% were the other choices. Respondents could pick more than one choice.)

Also the competitive dynamic is rapidly changing. Not only are there fintech lenders like OnDeck and Kabbage in the market, but the likes of PayPal, Square and Amazon are moving aggressively to court small businesses with multiple integrated services including credit.

And as noted earlier, the new crop of startups is more inclined to try out these nonbank options. The Cargo report notes that even though large SMBs were more likely to recommend their banking provider, they also said they were likely to switch providers in the next year, although a percentage was not given.

The Meaning of ‘Trust’ Is Changing

Brand trustworthiness came out on top across all sizes of small businesses except for the largest, where it was number two behind “financial considerations.” 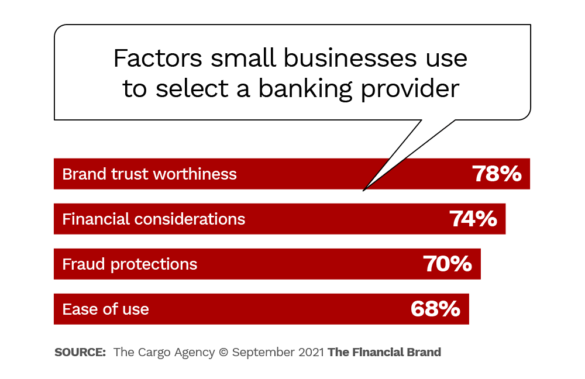 In the interview with The Financial Brand Gliatta says that “trust” consists of many factors that go beyond just whether an institution does what it says it will do. This includes “human factors,” such as empathy, inclusivity and authenticity.

“You’re seeing more and more small businesses want to do business with companies whose purpose isn’t just the bottom line,” the marketing executive notes. “That’s all wrapped up in this idea of trust.”

If you really care about small business customers, are they feeling it? Trustworthiness is a critical issue with almost all of them.

But another factor emerged from the data as being a key part of trust: continuity and consistency of service no matter how the customer comes in contact with the brand. This encompasses digital experiences and customer experience overall, including a seamless experience between physical and digital channels, Gliatta states.

“It’s less about the product and the service and it’s much more about the experience,” he says, which includes speed of response and making it as frictionless as possible. “With opening accounts online, if there’s any friction, customers will just move on.” Not only that, but the post-purchase experience needs to be frictionless, says Gliatta. 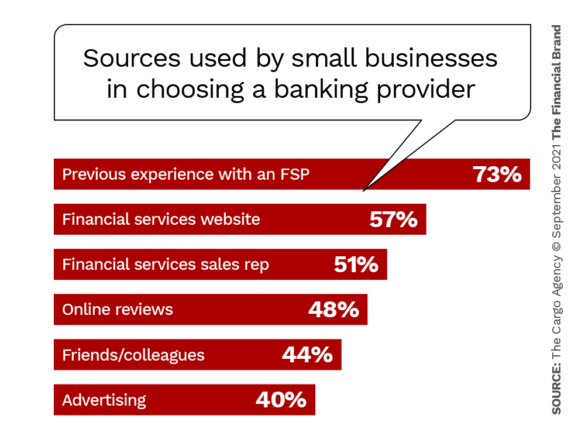 Many small businesses (though not all) were shaken by the pandemic experience, and are looking for help to adjust and possibly reinvent themselves.

Suggestion one: Become a trusted advisor. Gliatta believes this is a perfect opportunity for financial institutions to step in and help small businesses. Naturally this requires training and other preparation but he believes such a trusted advisory role changes the typical narrative between banks and their clients.

“We’ve asked the same question for 15 years,” he says: “‘What is the number one complaint you have when you’re dealing with a big brand, whether it’s a bank or any other business?’ The answer is, ‘They try to prescribe a solution before they take a minute to really understand me and my business and what my needs are’.”

Suggestion two: Integrate your offerings. Since the vast majority of SMBs prefer to do all their financial business with the same provider, resist putting your products and services into silos based on how you want to sell them. Instead, integrate them in the way SMBs want to buy them. Roll all of your offerings into one integrated ecosystem of financial products with a common value proposition.