Subscribe Now Get The Financial Brand's FREE Email Newsletter
Economic conditions (and a little more age) are impacting the outlook and financial habits of the the older half of the massive Gen Z cohort. New research from Bank of America spotlights some of the challenges Gen Z consumers face along with their preferences and concerns.

Gen Z is an intriguing generation from a financial behavior standpoint, raised on social media with an adulthood defined by Covid-19. Even just a year or two ago, Gen Zers were reported to be falling behind with even fundamental financial knowhow.

No longer. Gen Z is now comfortable with daily, mundane financial responsibilities, according to new Bank of America research. Instead, what they want more of from their banking providers is assistance with big-picture finances: retirement, investing, building up emergency funds. BofA worked with Ipsos to poll 18 to 25 year old Bank of America consumers on a range of financial questions in late June-early July 2022.

Here are the top trends bankers must know about Gen Z when building out 2023 strategic planning goals.

More than four out of five members of Gen Z (85%) say they face a barrier to financial success. These “barriers” fall into at least one of the following categories: 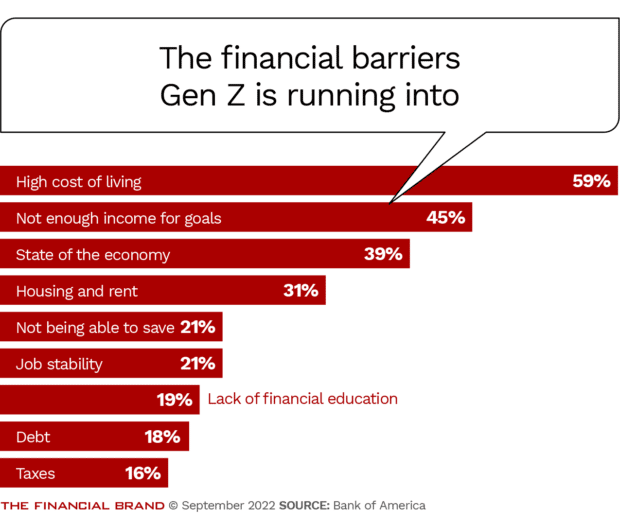 Saving is a particularly difficult hitch in the Gen Z journey, worsened in 2022 by inflation woes.

The generation is trying to plan long-term, but the day-to-day expenses make it difficult to scrounge up money for savings, the report finds. Even as two-thirds of Gen Z is actively saving for financial goals, the price of renting has been a detriment to their progress. Two-fifths (40%) of Gen Z says keeping a roof over their head alone has been difficult.

Inflation has been the main cause of this tension. When asked about how inflation impacts their day-to-day financial lives, Gen Z says it has

Even with the ongoing student loan payment holiday, debt remains frightening to Gen Z. (The survey was conducted prior to President Biden’s decision to forgive a big chunk of student loans.) Almost half of the generation (46%) in Bank of America’s survey carries debt.

In addition to taking on second (or third) jobs, half of Gen Z with debt would “sacrifice chocolate and pizza for a year” or “babysit twin toddlers for a week” and two out of five (39%) would “give up their cell phone for a month.”

Gen Z wants more insight into investing and handling their debt. As BofA found, “preparedness levels decrease significantly when it comes to more complex topics critical to a more secure future, including building an emergency fund (54%), saving for retirement (43%) and investing (29%).”

The Financial Tasks Gen Z Is Comfortable With

Gen Z isn’t seeking support in every area of their financial lives. In fact, the older half of the generation is doing markedly better with finances than even two years ago.

“If we go back a couple years, we have seen Gen Z take more action toward getting financial education tools, setting up budgets and planning for emergency savings,” Christine Channels, Head of Community Banking and Consumer Governance at Bank of America tells The Financial Brand. “The most recent survey showed they do feel equipped to handle basic financial tasks.” 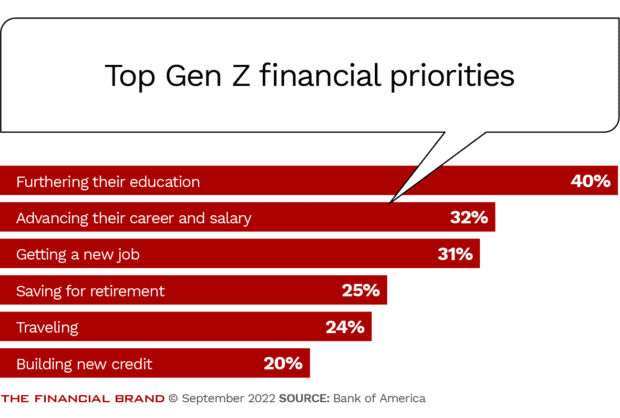 Members of Gen Z are determined to bring their goals to fruition. Three quarters have or are considering methods to add supplemental income by:

Channels credits this to the fact that the oldest of Gen Z are approaching a kind of financial maturity. They are growing more adept as a whole with daily money management skills. While they struggle to save amidst inflation, savings remains a critical part of Gen Z’s planning, she says.

Gen Z might be struggling with the big-picture financial tasks — but more of them are getting the financial basics down pat.

“Having savings for the unexpected and being prepared for an emergency is probably a higher priority than it was for the generation before because [that generation — Millennials] hadn’t experienced the pandemic” as they were reaching financial maturity, she says.

Read More: Gen Z Payment Trends: How They Use Cash, P2P and BNPL

When asked about the last five years, roughly two out of five of both Black/African American (41%) and Hispanic (42%) Gen Z members acknowledge there has been at least some progress to close the racial wealth gap, but nearly a third of both (30%) say there has been no visible progress. Similar percentages are skeptical that will change over the next five years.

Nearly a third of Black and Hispanic Gen Z populations aren't optimistic that the wealth gap will improve over the next half a decade.

The different minorities struggle in unique ways. Bank of America’s research found education gaps most hinder Hispanic segments. On the other hand, a third of the Black Gen Z population said not setting aside more money for savings is their biggest financial regret, while another third said taking on excessive debt was the culprit.

While Gen Z women are fairly confident in their ability to stick to a budget and build their credit, they feel far less equipped to deal with day-to-day expenses (63%) or build emergency savings funds (48%) than their male counterparts (76% and 61% respectively).

How Banks Can Step Forward

The best way for a banking provider to address financial worries amidst any Gen Z segment is by striking up a conversation. They’re wary of talking — roughly three quarters Gen Z members would rather meet their partner’s family (80%) or say ‘I love you’ (73%) to a significant other than discuss money. But, Gen Z is ready to learn and a dialogue with these younger customers can be a building block of a long-term, loyal bank customer.

This is where financial education can come into play, Channels says. Either through physical or digital channels, Gen Z has said they are interested in a classroom setting to learn more about their finances.

“They [Gen Z] make up almost half of our engaged users, whether it’s through digital content or our [financial education] sessions that we have,” Channels says. “We offer these financial education resources to allow young adults to engage and receive it the way they want: whether they want to do it digitally, online by themselves or in a classroom setting.”