Subscribe Now Get The Financial Brand's FREE Email Newsletter
Women are a critical customer segment for every bank or credit union, yet their specific needs are often overlooked by the banking industry. Two reports — from Bank of America and the Financial Health Network — illustrate what banks and credit unions can do better to meet women's financial needs.

It was a much different world when James Brown first sang “It’s a Man’s Man’s Man’s World” in 1966.

The song’s title seems out of touch in the 21st century. Yet, some of the sentiment that song represents still remains. Nearly half of women say they feel confident about their finances, yet only 28% feel empowered to take financial action. And as a recession looms on the horizon, the difference between women and men who feel prepared to deal with it is still significantly in favor of men.

In fact, according to a Financial Health Network report, a man is still nearly 1.5 times more likely to be considered “financially healthy” than a woman.

More women are realizing this deviation still exists — and they’re working to fix it. One in five women say it is time to make a change with their finances, according to Bank of America. Areas where they are particularly focused include building personal wealth in addition to emergency and retirement savings, “activities that could be supported with an increase in investment knowledge and confidence,” the report states.

An ABN AMRO survey — conducted by McKinsey and Better Future — confirms this. The report was conducted in the Netherlands, but the bank’s Head of Inclusive Banking Chantal Korteweg suggests women’s financial health is a much larger issue globally.

“Our research found that many women feel insufficiently understood by their banks or financial advisors,” says Korteweg. “That’s why we should better align our services offering with women’s requirements at various stages of their lives. This essentially means clearer and more accessible communication as well as products that reflect what women are looking for.”

Far more women feel vulnerable about their financial health than men, enough of a difference that the Financial Health Network considers it statistically significant. 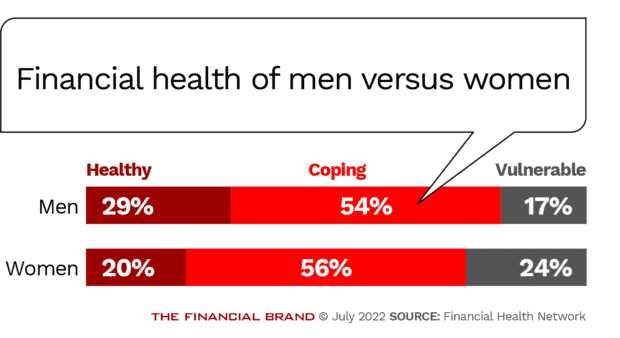 Both men and women anticipate these headwinds won’t last forever, and that women will one day be responsible for their own finances and confident in their ability to influence household decisions. Yet, that confidence is still a long ways from fully maturing. Bank of America found “women see themselves as more truthful than men about finances, but men see themselves as more confident and more knowledgeable.” 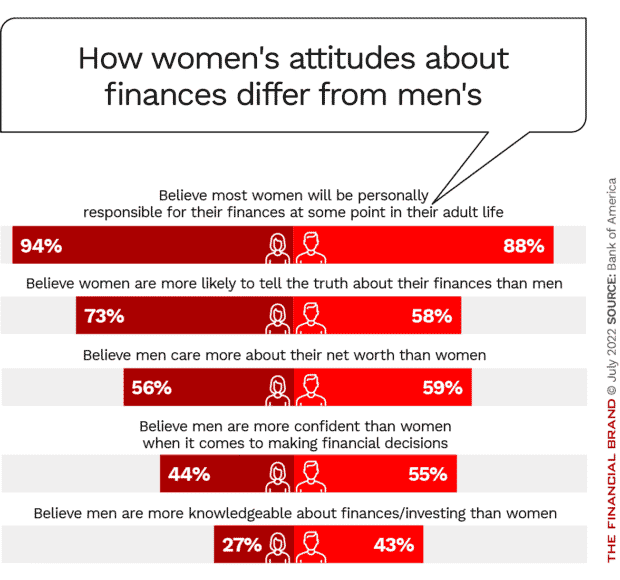 Some readers may assume this is representative solely of women who struggle to make ends meet. However, wealthy women say they too struggle with their confidence to handle their own finances, particularly because they feel underrepresented and misunderstood in the banking world.

“Two out of three say financial services do not meet their specific needs, the biggest stumbling block being a lack of financial products protecting and preserving the wealth of their families,” the ABN report states. “They more often require investment products with longer investment horizons and are more interested than high net worth men in sustainable investments with a positive social impact.”

Some of the factors that differentiate the financial health of men versus women are outside the realm of bankers. However, it is still critical financial institutions be aware of financial struggles women run into, so bankers can provide female customers with the right tools they need to feel confident with their finances. Below are some key areas to consider.

By and large, women are at their most confident when it comes to taking care of short-term financial needs and day-to-day banking tasks, Bank of America found. Most women surveyed ultimately feel they are involved and have influence in paying bills (68%) and determining the budget for their households (63%).

Where the bulk of women struggle, however, is with long-term financial plans. They don’t feel they have nearly as much influence as a male counterparts when it comes to picking financial advisors (40%), choosing a mortgage (37%) and managing any investments (46%). Women’s biggest financial goals — saving for emergencies, saving for retirement and building wealth — are also the hardest to reach.

The number of women at retirement age without a financial plan:
One-fifth

Retirement in particular is a beast many female banking customers want to tame, but aren’t sure where to start. For instance, women are less likely to identify how much money they’ll need in retirement, the BofA report found. Roughly half of women do not have any retirement savings and Bank of America warns that the “46% of women who do not list retirement among their top three long-term goals may risk not being financially prepared by not starting to save early enough.”

This can be especially problematic for younger generations. However, even many older women are without a long-term strategy. Startingly, one-fifth of women ages 55 and older told Bank of America they do not have a financial plan.

There has never been a better time for a bank or credit union to integrate more financial education into their marketing strategy, both Bank of America and the Financial Health Network argue that’s because more women admit they are open to discussing money. Seven out of ten women even said they are comfortable with the idea of speaking to a financial advisor one-on-one. This compares to less than half of women (47%) a decade ago, according to a 2012 Fidelity study.

It’s important to remember women’s financial situations can vary wildly, differentiated by age, income and ethnicity, so many women are looking for individualized support. However, there are several factors any financial institution can consider when designing financial education programs designed for female customers. For instance, over half of those (53%) who say they would be comfortable talking to financial advisors also say they would find it easier to talk to other women.

Other factors to consider when designing financial planning tools or programs for women include such things as “potential career interruptions and their impacts,” the report suggests. Nearly half of women reported they needed to leave the traditional workforce or their career post-Covid and had to resort to a lower-paying position upon returning to the workforce. Additionally, many women also associate financial independence with well-developed savings account to cover unexpected expenses and a freedom of debt.

Listen In: How Banks Can Enable Young Consumers with Financial Education

What Female Entrepreneurs Need From Banks

Women are not just customers or employees in the banking office — they’re also entrepreneurs. A 2021 American Express report found two out of five U.S. businesses are women-owned, which amount to an estimated 13 million businesses in total. Owning a small business as a woman comes with its own set of obstacles a financial institution can tailor solutions for.

For instance, one report published in the Frontiers in Psychology journal said female small business owners often struggle to get access to proper financing from traditional banks “due to a lack of adequate operating cash, credit history and collateral resources.”

Access to financing for their small businesses can still be a massive pain point for female entrepreneurs.

Women entrepreneurs especially struggled to stay afloat during and following the onslaught of Covid-19.

Larger banks, such as Bank of America and HSBC have established lending programs and specific financing options designed for female-owned and -operated businesses.