Subscribe Now Get The Financial Brand's FREE Email Newsletter
Who would have predicted people would start Googling 'credit builder loans' like crazy, given that the programs have never been historically popular? It is happening though, and in light of the new interest neobanks and fintechs are introducing their own takes on this unique credit product.

Consumers want to learn more about building their credit scores than ever before. People specifically are looking to dive into credit builder loan programs, often nicknamed the “backwards loan,” as a quick option. Google Trends, which tracks how often a term is searched, found that “credit builder loan” was searched far more often in 2020 than when it was a few years earlier. 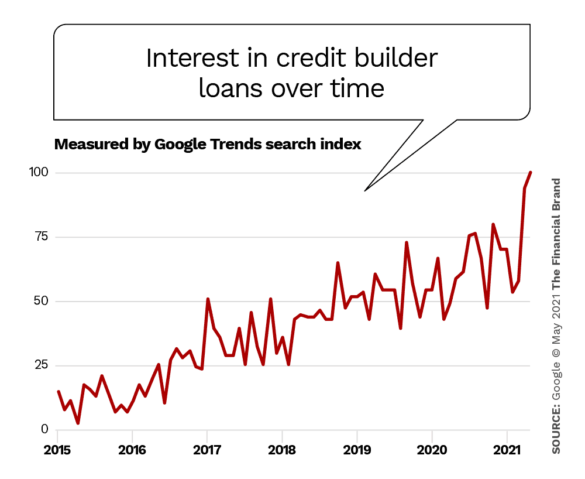 Much of that jump likely can be attributed to the economic pressures of the pandemic, but whatever the cause, the change didn’t go unnoticed by the fintech community.

Most banking executives likely know what a credit builder loan (CBL) is: a non-traditional loan where people receive the funds at the end of the agreed term instead of receiving the money upfront. It’s designed to help consumers with no credit history (or credit score) or a low score gain entry into the credit market.

Despite the edge for consumers, most banks or credit unions spend few to no resources advertising these loans. Maybe their institution started the program years ago and now the program just fields a few hundred low-ROI loans every month. Nothing particularly special.

Although credit builder loans are fueling boosts in consumers’ credit scores, and there is profit potential in the loans, banks and credit unions aren’t advertising them.

It makes sense that more people are intrigued by credit builder options now — especially younger generations who are told to build their credit, but who also want a low-risk alternative to a credit card, which many young adults view as a too-easy route to debt. Traditionally, banks and credit unions don’t require a hard credit check with CBLs, so there is no minimum credit score requirement.

It’s an effective option. Credit Strong, a fintech owned by Austin Capital Bank, which specializes in credit builder loans, analyzed 50,000 of its customers and found the average account holder with a CBL increased their credit scores by 70 points on average.

For a nation with millions of Americans with no or poor credit score, this could be a notable solution.

Roughly 26 million adults — one in every ten Americans — are “credit invisible,” which means they lack a credit score entirely, according to a 2020 Consumer Financial Protection Bureau (CFPB) study.

In their findings, the CFPB found an additional 19 million Americans had a credit record, but no actual credit score “because their history is too thin.” Even then, of U.S. citizens with credit scores, one in three people have a subprime score (traditionally between a 580 and 669).

Millions of people in U.S. struggle to get a credit score up and running, and there are even more who have difficulty maintaining a healthy credit score. Credit builder loans can help with both.

The CFPB found an additional 19 million Americans had a credit record, but no actual credit score “because their history is too thin.” Further, of those citizens with credit scores, one in three have a subprime score (traditionally between a 580 and 669).

In their report, CreditStrong highlights the benefits of a CBL for individuals with non-existent or subprime credit scores. One is that the average account holder with a low FICO score increased their score by more than 25 points in three months. After nine months, they improved by 40 points. On top of this, account holders with no credit score paying their loan payments on time reported earned credit scores between 630 and 650 after the first year.

What Are the Benefits for Financial Institutions?

While credit builder loans have a clear advantage for consumers, few banks offer credit builder loan amounts of larger than $3,000 and the terms are rarely longer than two years. Is this a long-term benefit for a financial institution? It could be.

“We don’t really look at it from a profitability standpoint,” she says. “We prioritize helping members achieve what they want financially.” Sometimes consumers come to her looking for a way to just build their initial credit, but others fall on hard times and struggle getting their credit score up to a healthy rate.

“Maybe they had a rough patch in their credit history and they really need something to help them get back on their feet,” Thomasian says. “We look at this as a product to help them. I guess the benefit to us is helping them get to where they want to be financially.”

While banks and credit unions offer very similar products, they often structure credit builder loans in different ways. For instance, credit unions will typically deposit the monthly payments into a savings account for their members.

Banks, on the other hand, will open a CD for the customer and, at the end of the term, release the funds or allow the customer to keep the CD.

It’s clear consumers want to nurture their credit score without turning to a credit card as evidenced by the Google Trends data. To meet the growing demand, fintechs and neobanks are offering their own take on credit builder loans.

Here are just a few of the challenger banks looking to poach consumers with credit builder programs.

CreditStrong
CreditStrong might know better than anyone, given the data they’ve pulled out, how badly consumers want to build their credit. The Birmingham, Ala.-based fintech advertises an easy loan approval and promises it’ll get people a bank loan through its parent company, Austin Capital Bank, and place the funds in a savings account.

Over time, people can track their progress monthly with a free FICO Score 8 report, provided by CreditStrong. Once their loan is fully paid off, the lock comes off the savings account and individuals can either keep the cash in the savings account or withdraw the money.

In a review of the service on the website, one consumer says he had a 394-credit score prior to taking out a credit builder loan with CreditStrong. Once his 18-month loan came to term, his credit score turned out 331 points higher, ending at a 725.

MoneyLion. MoneyLion’s credit builder loan talks and walks like what most banks and credit unions offer, but it has an extra touch. Unlike competitor programs, MoneyLion’s Credit Builder Plus gives borrowers a portion of their funds right away, instead of receiving a lump sum at the end of the term.

The catch? Along with the monthly loan payment, borrowers must also pay an additional $19.99 for the Credit Builder Plus membership.

However, MoneyLion offers competitive score increases. The company reported more than half of its members raised their scores by 60 points in the first two months. Moreover, consumers can also track their progress using MoneyLion’s mobile app and save on administrative fees if they open an investment account with the neobank.

Chime. Chime announced in mid-2020 it would start offering a secured credit card, advertising it as “Chime Credit Builder.” Consumers move the money they intend to spend onto the card ahead of time and all purchases go toward improving the credit score.

The balance on the card won’t contribute to a high-utilization record and, unlike a traditional credit card, has no fees and no interest rate.

Self. Lastly, Self — a fintech lender specifically designed to help consumers build their credit — offers a CBL, starting at $25 a month with interest rates around 15.92%. Similar to how most banks set up credit builder loans, Self deposits the payments into a CD. Once the loan is fully paid off, the CD unlocks and the money is released to the borrower.

Since the company launched the program, over 1.9 million people have signed up to build their credit with Self and the results were quick. One consumer reported a 118-point jump in just four months and another said his score went from 4 to 710 in nine months, according to Self’s website.