Subscribe Now Get The Financial Brand's FREE Email Newsletter
Want to learn more about the unbanked and underbanked? This huge, exhaustive study will tell you just about anything you could ever want to know.

The FDIC has just released what is probably the most exhaustive analysis of under- and unbanked households ever undertaken. The 155-page National Survey of Unbanked and Underbanked Households breaks down the data by age, ethic group, geography — just about any way you can think to slice it.

The FDIC partnered with the U.S. Census Bureau to conduct this survey back in June 2011, collecting responses from nearly 45,000 households. Through this partnership with the U.S. Census, the FDIC study is able to correlate data with rich demographic and geographic information gathered in the Current Population Survey. The research reveals insights previously unavailable on unbanked and underbanked households, and parses data down at the national, state and metropolitan levels.

More than one in four households (28.3%) are either unbanked or underbanked, conducting all or some of their financial transactions outside of the mainstream banking system. 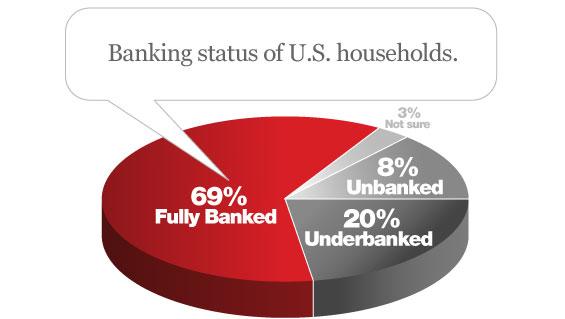 This is the second such study the FDIC has commissioned. The first survey, also conducted on behalf of the FDIC by the U.S. Census Bureau, was conducted in 2009.

The FDIC says it hopes this study will address a gap in the availability of real, actionable data on unbanked and underbanked households.

Unbanked and underbanked households are not homogeneous populations. On the contrary, these groups have diverse demographic characteristics, past banking experiences, reasons for not holding an account, and future banking plans. 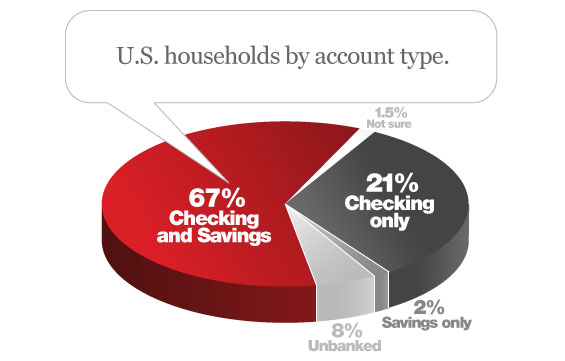 8.2% of U.S. households are unbanked. This represents 1 in 12 households in the nation, or nearly 10 million total. Approximately 17 million adults live in unbanked households.

Certain segments of the unbanked population are more inclined to open an account. While most unbanked households report that they are not likely to open an account in the future, one-third (33.9%) report they are “very likely” or “somewhat likely” to do so. Unbanked individuals who are younger, unemployed, have some college education, and/or are in family households headed by an unmarried woman are more likely to open a bank account. Also, likelihood increases the more someone uses alternate financial services. 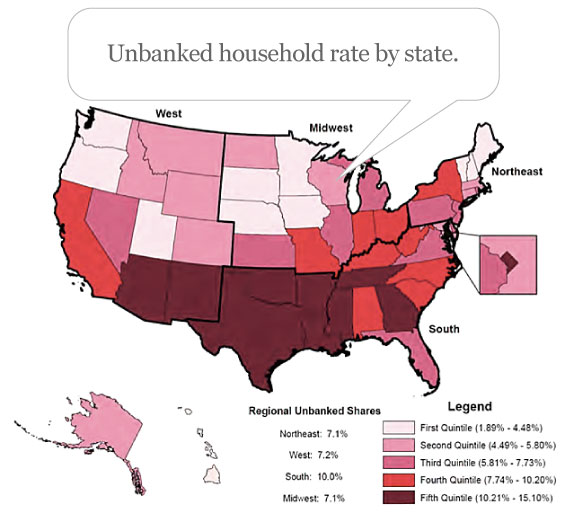 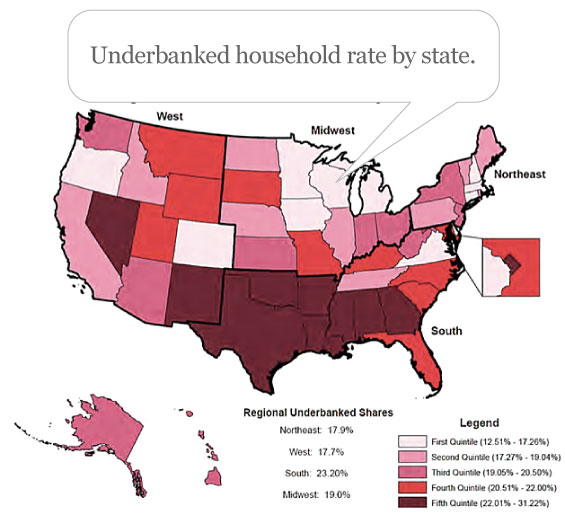 Prepaid Grows in Popularity Among Unbanked

A Closer Look at the Hispanic Unbanked

Financial marketers targeting unbanked Hispanic households should note that this group includes two distinct segments with starkly different financial services behavior. One substantial segment (29.6 percent) of this group does not use any financial services from bank or non-bank provid- ers, while another uses AFS more actively than any other ethnic or racial group: 51.8 percent of unbanked Hispan- ics used AFS in the last 30 days, including almost a quar- ter (22.5 percent) who used two or more AFS in that period. In contrast, among other unbanked segments, only about 43 percent of white or black households used AFS in the last 30 days and about 14 percent used two or more in that time frame.