Subscribe Now Get The Financial Brand's FREE Email Newsletter
Just less than half (43.9%) of U.S. households -- 132.1 million people -- do not have a basic financial safety net for emergencies or future needs. They lack the savings to cover basic expenses for three months should unemployment, a medical emergency or other crisis arise.
Subscribe Now!

These people on the brink of financial catastrophe includes a majority of the 42.2 million who live below the official income poverty line of $23,050 for a family of four, as well as many who would describe themselves as middle class. One quarter (25.7%) of households earning $55,465-$90,000 annually have less than three months of savings.

These findings come from the Assets & Opportunity Scorecard, a massive study of Americans’ financial well-being published by the Corporation for Enterprise Development.

Research revealed that 26% of households are “net worth asset poor,” meaning that the few assets they have — savings, a home, business or car — are overwhelmed by their debts. These asset poor families, whether they lack emergency savings, durable assets or both, are forced to prioritize today’s expenses over tomorrow’s goals. These families have made pragmatic choices, in part, to cope with the recession’s continued impact. However, many also lack even the basic tools to save for a rainy day.

With little or no savings to make their household budgets work, families continue to take on debt. The average borrower is carrying $10,736 in credit card debt. Unfortunately, more than half (56.4%) of consumers do not qualify for short-term credit at “prime” rates, leaving them to turn to high-cost payday, auto-title or installment loans to make it through another week. One out of five households who have a mainstream bank account still uses predatory or high cost financial services.

Only about one-third of the lowest income households (those making less than $15,000) have a savings account, compared to almost 90% of households making $75,000 or more a year.

Faced with limited savings, high debt and bad credit, families’ ability to invest in long-term assets — such as a home, business or college education — is largely out of reach. Median net worth declined by over $27,000 from its peak in 2006 to $68,948 in 2010 (the latest year for which data are available). 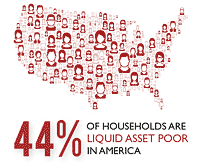 The drop in homeownership has been fueled by both a continued high rate of foreclosures and tightening of the mortgage market. By the second quarter of 2012 the foreclosure rate had dropped to 4.27% — a decrease from a 2010 high of 4.6% but still above the pre-housing crash rate of 0.99% in 2006.

The move by financial institutions to stop offering high-cost mortgage loans — another factor contributing to the drop in homeownership rates — has been a mixed blessing for asset poor families. On the up side, they are no longer prey for abusive and unscrupulous lenders. On the down side, they are largely shut out of the mortgage market.

Approximately 79% of underbanked households use non-bank money orders, while 31% use check cashing services, meaning they spend a significant amount on services for which most Americans pay little to nothing. Underbanked households are also more prone to loss or theft and face challenges in building credit and achieving financial security compared to banked households. Overall, use of alternative financial services has become more prevalent since 2009, with larger proportions of households of different ages, education levels, race/ethnicity and family type all reporting greater use of alternative financial services. 8.2% of U.S. households have no mainstream financial account at all. 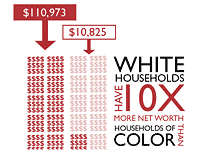 Run Custom Reports for Your State

You can run your own custom reports for individual states at the CFED website by clicking this link.