Subscribe Now Get The Financial Brand's FREE Email Newsletter
Every day, countless consumers around the world hop onto Google searching for a neobank to replace their traditional institution. Who's winning the war for people's attention, and how do all these digital players stack up? A new report breaks it down, country by country.

The introduction of the iPhone in 2007 changed the banking industry forever. Sure, some internet banks existed well before then, but the Apple product radically changed consumer habits almost overnight. It didn’t take long for innovators to figure out that a smartphone could make digital-only banking more appealing and more far-reaching.

Simple and Ally Bank both launched in 2009, Moven in 2011 and Chime in 2013. Then the floodgates opened in 2015. Now there are hundreds around the world, with new ones popping up regularly. Even NuBank — with more than 48 million users — has been recognized as a primary banking player in Brazil, a country formerly largely served by a small oligopoly of legacy institutions.

Which of these digital banking disruptors is most popular? Every country seems to have a front-runner. To satisfy peoples’ curiosity, Business Financing — a finance and lending research and information website — devised a way to decipher which are the most popular neobanks by country.

The company used The Financial Brand‘s List of Digital Banks as one of its sources to build out a list of neobanks and digital-only banks. To determine popularity, Business Financing used Google search history, tapping search volume website Ahrefs’ Keywords Explorer to collate the totals as of July 2021. Ideally, a ranking of the most popular digital banks would be based on their actual number of users. However, it’s reasonably safe to infer that the digital banks generating the most Google searches are also getting a lot of website traffic, which, in turn, leads to more users.

Using search volume methodology, the information below is what Business Financing found in its report. We first present the top players here with key insights, followed by digital banks that are most popular in more than one country and then the regional picture. 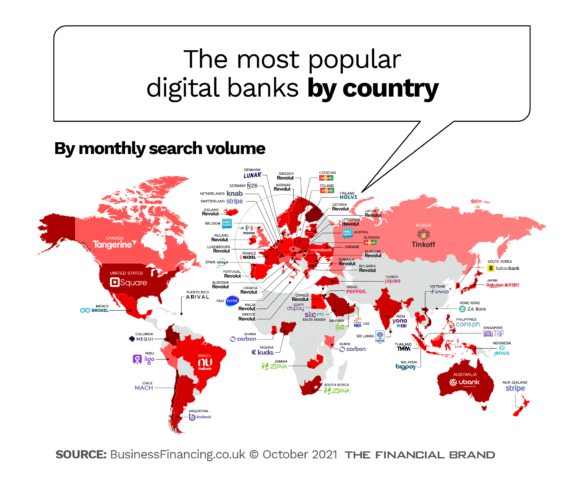 Business Financing determined that Square, with 719,000 searches per month, was the United States’ most popular digital bank. Unlike a majority of American neobanks, however, Square’s base doesn’t consist solely of consumers — it also serves small and midsize businesses nationwide (see the Insight below). Worldwide, Square had over 880,000 in global searches.

Readers may wonder why Chime, with users exceeding 12 million, did not come out on top. While Square is most often thought of as a small business payment company, its Cash App P2P payment solution alone has 36 million monthly active users, according to Business of Apps, dwarfing Chime’s total. Cash App is heavily used for bitcoin trading, however, so it’s not really an apples-to-apples comparison. Chime may indeed be the most popular banking app among consumers. 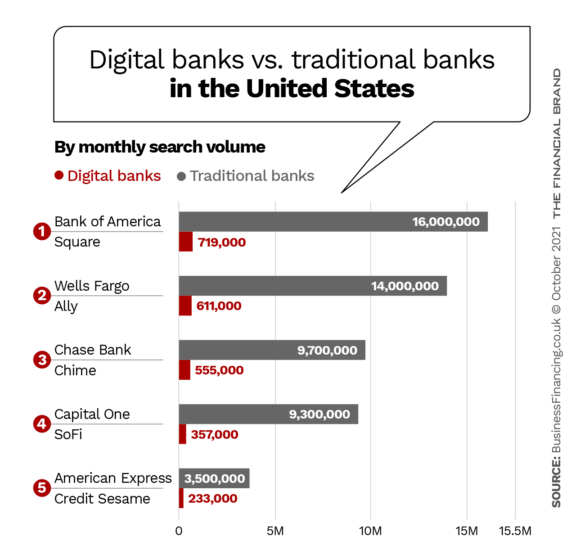 Since its inception in 2015, Monzo has amassed some five million customers. With approximately 237,000 monthly searches in the U.K. (and an additional 7,600 in the U.S.), Business Financing determined that Monzo outpaced well-known neobank competitors Starling Bank (with 213,000 searches), Revolut (with 196,000) and Stripe (with 96,000). It may be because Monzo offers a full suite of traditional banking products — for both consumers and businesses alike — in addition to its own version of Buy Now, Pay Later.

U.K. success so far hasn’t made the leap to the U.S. for Monzo. The company withdrew its application for a national banking charter for now. 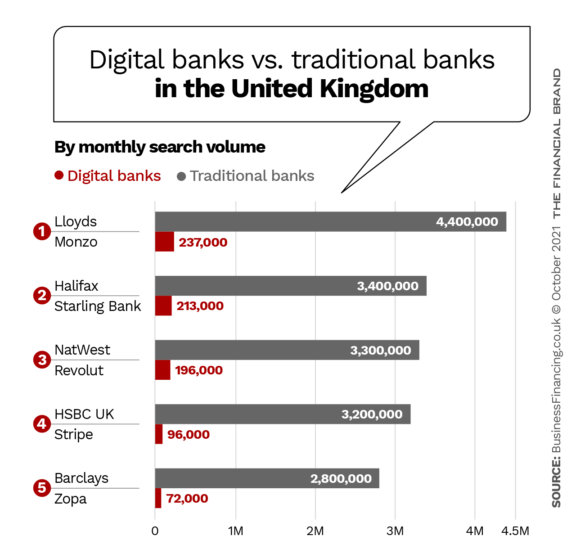 On top in Canada is Scotiabank-owned Tangerine, with 597,000 Google searches. The digital bank has amassed a base of 1.9 million customers. While the majority of digital-only banks got started in the 21st century, Tangerine was established in 1997 — called ING Direct Canada at the time. Scotiabank acquired the institution in 2012, rebranding it a few years later.

While Business Financing considers the Canadian bank a digital-only bank, Tangerine does have a “cafe” located in its headquarters in Toronto. 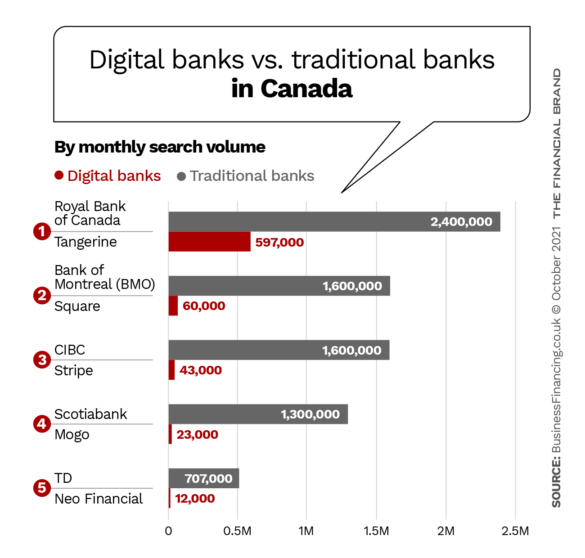 Topping the charts in Europe is Revolut, which dominates the region by a landslide. Business Financing found that it was the most popular digital-only bank in 17 countries. The neobank has earned its spot at the top of the charts — tailored with the tagline “the first fintech bank for the abnormal.” Revolut serves not only consumers but specializes in small- and medium-sized business services. Worldwide, Revolut’s monthly search total was 989,200.

Although primarily a digital banking platform, Ubank also has branches, so it does not qualify for The Financial Brand‘s Neobank Tracker, which only lists digital-only institutions. However, similar to Tangerine, Business Financing included the bank in its listing and named it Australia’s most popular digital bank with an average 133,000 searches per month. The bank lays claim to have the country’s first ‘digital human’ — an artificial intelligence-powered home loan assistant called Mia. 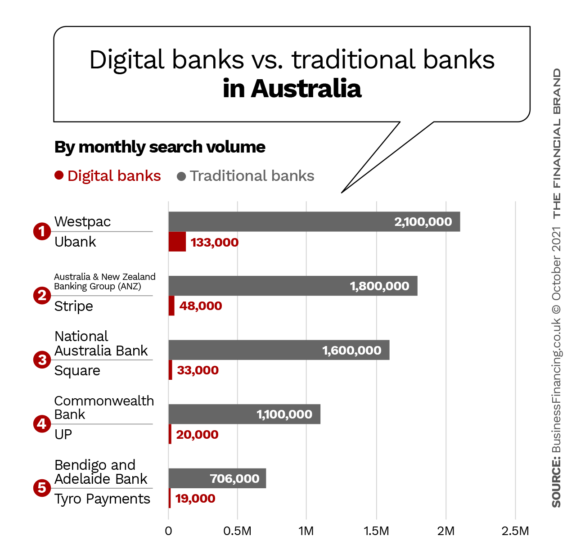 Although most neobanks got their start in the 2000’s, mBank was a pioneer. Launched in 1986, the company was the first of its kind in Poland and remains the most popular digital-only bank in the country. In addition, it has also now spread its footprint to make the most popular list in the Czech Republic and Slovakia. Impressively, mBank worldwide attracted almost 2.5 million monthly searches, more than double Revolut’s total.

Carbon may be a headquartered in Nigeria, but its influence is strongest in Ghana and Kenya where Business Financing determined it is the most searched neobank. Considered a microfinance bank, Carbon caters to both businesses and consumers, with checking and savings accounts as well as payments and loans. Carbon has even jumped on the Buy Now, Pay Later trend with its Carbon Zero product, which allows people to make larger purchases through the bank’s partnerships with a large list of vendors.

Stripe is a major payment gateway for credit card transactions in countries around the world, particularly in the U.S. and Europe. Stripe takes the top spot in both Switzerland and The Netherlands in the Business Financing rankings of search volumes.

While Stripe doesn’t look or act like a traditional financial institution — or even a neobank, the software-as-a-service company instead designs open APIs for invoice management and other online business functions for small to large businesses. What gives Stripe the bank angle isn’t a checking or savings account. Instead, its corporate card and lending earns the company a place on the list. Stripe had just over 900,000 monthly searches worldwide.

Created by French bank BNP Paribas, Hello Bank! first caught the attention of The Financial Brand when it first launched in 2013. The bank’s innovation lab, Hello Factory, is an open discussion-based platform for customers to learn more about how Hello bank! is innovating as well as allow these same customers to voice their own opinions. While it is headquartered in France, Hello Bank! is the favorite neobank for Austria and Belgium.

Zoona launched in 2009 in South Africa where it is the most popular neobank. Dressed up with its lime green and dark blue branding, Zoona strives to be the top “interoperable financial services distribution network” in Zambia, where it is also the top digital bank. The company’s goal, accomplished with the help of various financial institution partnerships, is to take care of entrepreneurs all along southern Africa.

Readers may notice a few blank spots among the countries shown in the maps above, namely China, where the digital financial apps Alipay and WeChat Pay dominate. As Business Financing told The Financial Brand, it did not include China because the online search tool used for the study does not have extractable data from China. The communist government in China has tight regulations on search engines that prevent this type of analysis.

As noted above, Square and Tangerine dominated the search results in North America digital banking, together amassing nearly 1.4 million search results. But they’re not the only ones. Two other neobanks, listed below, can now boast a claim to fame as Puerto Rico’s and Mexico’s most popular neobank. 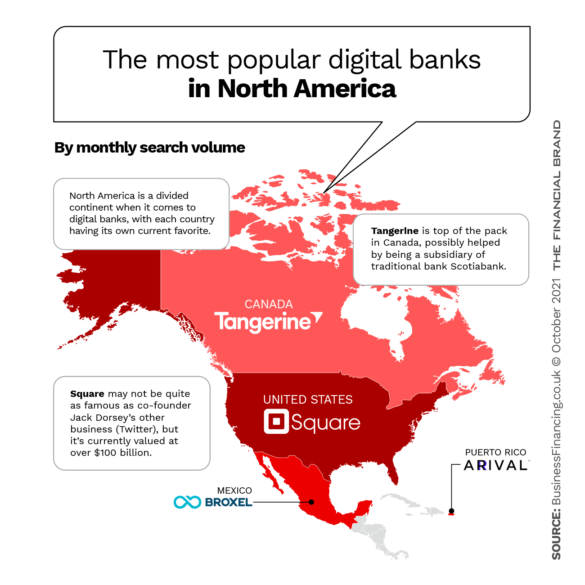 Most Popular Digital Banks in Europe

Revolut and mBank are far from the only strong neobanks in Europe, where dozens of digital institutions operate, several of which have garnered devoted followings. Hype, for example, is a fan favorite in Italy, where it operates exclusively. For self-employed consumers, Holvi offers multiple finance management tools in addition to a business account and credit card. N26, the strongest neobank in Germany, is building a foothold in the U.S. with a waitlist of customers looking to join its mobile banking platform. 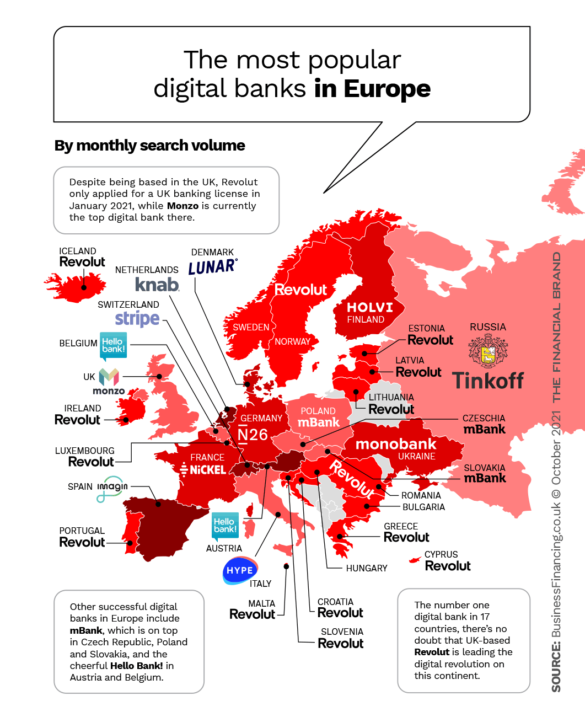 Whereas the U.K. and the U.S. can be considered prime hatcheries of the digital bank trend, South America has quietly spawned some major players. Brazil-based NuBank, for example, is considered the largest digital bank in the world, not only by Business Financing, but by other sources, based on number of users.

Elsewhere in South America: Nequi is Colombia’s most popular neobank, Mach is Chile’s as is Brubank in Argentina and Ligo in Peru. 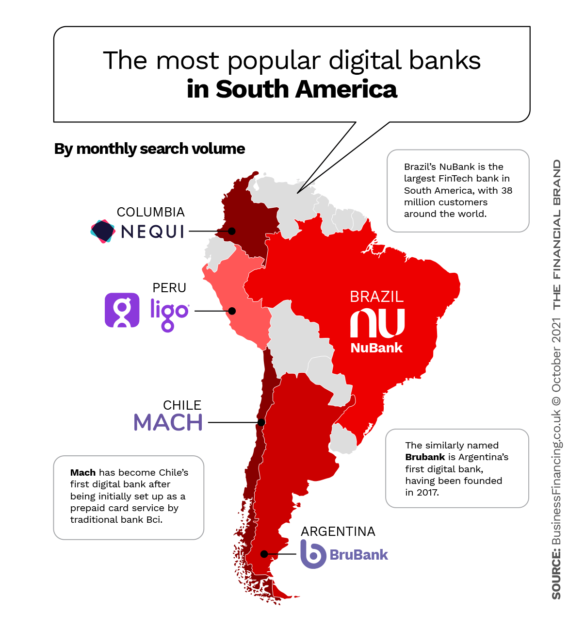 Most Popular Digital Banks in the Middle East

Business Financing found that in the Middle East “the most popular digital banks seem to be largely off-shoots of traditional banks who are aiming to keep ahead of modern trends and meet the expectations of their customers.” Take for instance Mashreq Neo’s foundation as a spin-off from the UAE’s oldest privately-owned bank Mashreqbank PSC. ila Bank is the offspring of ABC Bank and Papara is an extention of the Interbank Card Center. 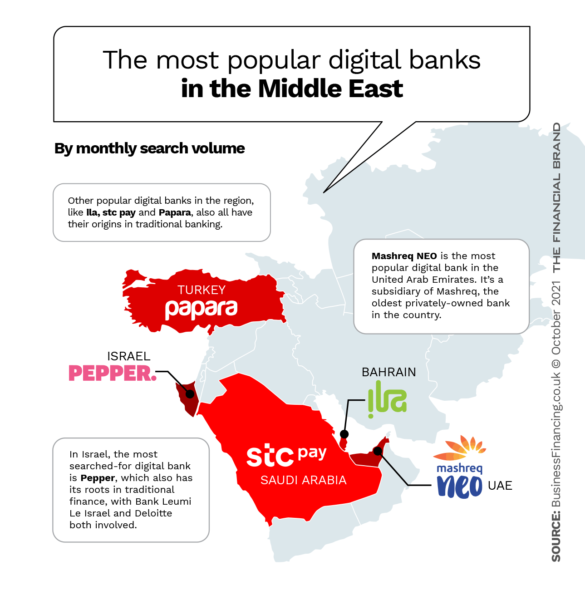 Most Popular Digital Banks in the Rest of Asia & Oceania

Even though search data was unavailable for China, Business Financing was able to pull data for Hong Kong, where ZA Bank was determined the most popular neobank.

Additionally, YONO — which stands for You Only Need One — is India’s most popular neobank with 230,000 monthly search results in that country alone. Another one to watch is Rakuten Bank, a Japanese-based neobank enjoying “unprecedented growth” with the addition of one million new customer accounts in the first half of 2021. That brought their entire customer base to 11 million customers. 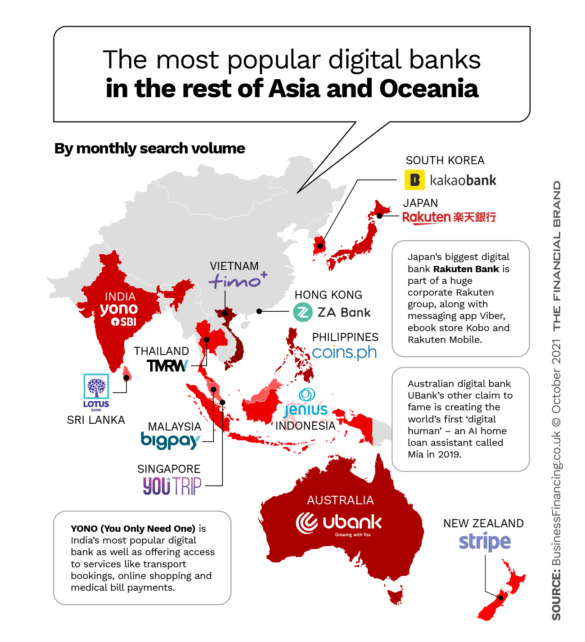 Most Popular Digital Banks in Africa

Although Business Financing was unable to pull search volume data for every African country, the company did gather data a several of the continent’s top neobanks. Carbon and Zoona, are mentioned above. Other winners include Egypt’s Dopay — which seeks to solve payroll issues as well as help employers open up full-service accounts for unbanked employees — and Nigeria’s Kuda. 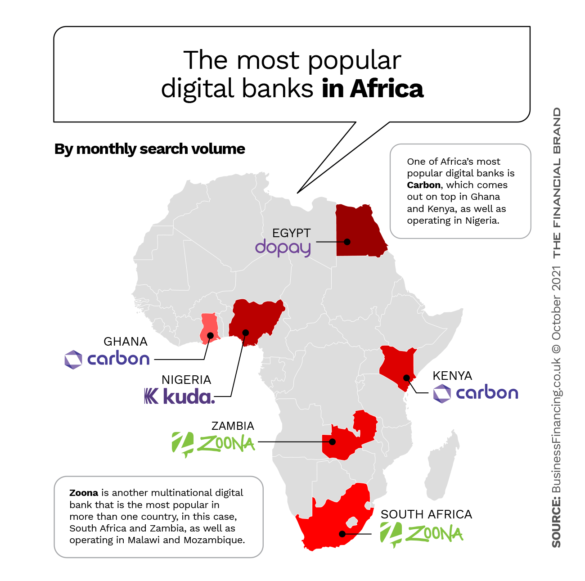