Subscribe Now Get The Financial Brand's FREE Email Newsletter
Consumers are increasingly using mobile devices as banking tools -- for everything from alerts and payments to budgeting and shopping. Indeed, mobile banking is no longer a value-added point of differentiation for banks and credit unions. It is fast becoming a basic consumer expectation.
Subscribe Now!

A report released by the U.S. Federal Reserve examines the role of mobile technologies in financial products, services and decisions. The report, “Consumers & Mobile Financial Services,” takes a broad look at the mobile banking landscape. The results are based on an online survey of 2,290 participants, fielded in December 2011 and January 2012.

This information should be highly useful to financial marketers looking to target mobile banking offers at the right people with the right message.

87% of the U.S. population now has a mobile phone (by comparison, 49% are on Facebook). 44% of mobile phones are smartphones (internet-enabled). 84% of smartphone users access the internet on their phone in the past week.

Reality Check: Mobile is the future for transactional banking.

In the report, the Federal Reserve defines “mobile banking” as using a mobile phone to access a bank account, credit card account, or other similar financial account. “Mobile banking” can be done either by accessing a bank’s web page through the web browser on a mobile phone, via text messaging, or by using an application downloaded to a mobile phone.

Consumers report using mobile banking up to 60 times per month; however, the median number of mobile banking transactions is four or five times in a typical month. 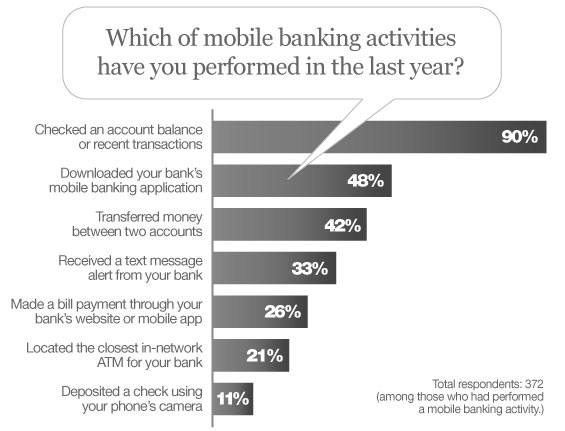 Many mobile banking users appear to be making use of their banks’ mobile applications, as 48% have installed such an application on their phones. 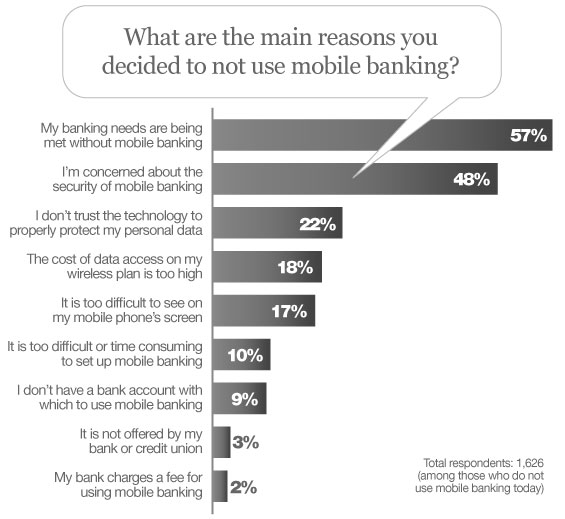 Consumers who express concerns about the security of mobile banking are concerned with hackers gaining access to their phone remotely (54%), losing their phone or having it stolen (19%), and experiencing data interception by a third party] (18%).

The Demographics of Mobile Bankers

Non-Hispanic black and Hispanic users show a disproportionately high rate of adoption of mobile banking, at 16% and 17% of all mobile banking users relative to 11% and 13% of mobile phone users respectively.

62% of the underbanked who use mobile payments have used it to pay bills. 10% of the completely unbanked report using mobile banking in the past 12 months, and 12% have made a mobile payment.