Subscribe Now Get The Financial Brand's FREE Email Newsletter
Want to increase your financial institution's satisfaction scores? Just get more consumers using your mobile banking platform. Four out of five consumers who use mobile banking apps say they are satisfied with their bank.

The survey also found large generational differences in the way people interact with their financial institutions that could have implications for both bank and credit union marketers. Specifically, 63% of Millennials, aged 25-34, said they use mobile banking applications. That percentage fell to 54% for those aged 35-49. Among people aged 50 or older, just 36% said they used their banks’ mobile apps.

Additionally, Millennials were more likely than older consumers to interact with their financial institution via text messages. Whereas 16% of Millennials expressed a preference for texting over other means of communication, only 9% of those aged 35-49 and 5% of those 50 or older expressed the same preference.

“Mobile apps present a tremendous opportunity for financial institutions to increase loyalty and add value,” says David Vonk, who leads the North American banking practice at FICO. “Banks that have made the mobile investment need to encourage their customers to actually use their mobile app, especially as busy consumers — especially Millennials — use smartphones and tablets to manage all aspects of their lives.”

It’s probably safe to assume that — from this point forward — there will be a strong correlation between consumers’ satisfaction with mobile banking and their overall satisfaction. In the year 2020, will there be any difference? No. In the future, asking someone if they are satisfied with their institution’s mobile banking services will be the same as asking them, “Do you like your bank?”

“With pressure growing from mobile and web-based financial service providers, traditional banks are finding it extremely important to keep existing customers engaged and satisfied in mobile channels,” Vonk points out. “Mobile apps give banks the opportunity for frequent, positive interactions with customers, especially Millennials, an even larger generation than the Baby Boomers. It’s an opportunity banks can’t afford to miss.”

Around the same time FICO was collecting data for its survey, banking research firm Javelin ran its own study examining the correlation between mobile banking and consumer satisfaction. The results of that study suggested that banks should be paying more attention to satisfaction ratings when planning digital innovation.

“Banks could find opportunities to reprioritize their investments in their digital capabilities, achieving both higher customer satisfaction and revenue on the same amount of technology investment,” said Jim Van Dyke, CEO of Javelin Strategy & Research. Banks need to separate faddish bells and whistles from the features that truly lead to greater value with customers.”

Javelin’s study was keen to point out that increased usage of mobile banking doesn’t necessarily translate to ever-increasing satisfaction scores. In other words, the guy who logins into mobile banking 40 times a month isn’t twice as happy as the guy who logins only 20 times. But the FICO study — and many others — correlate adoption with improved satisfaction levels. Simply put, you’ll see higher satisfaction scores if you get people using mobile banking… period. It doesn’t matter if they use it once a day or once a month. Just get them using your mobile channel.

Van Dyke at Javelin isn’t alone in his mobile admonishments. Indeed there is no shortage of experts in the banking industry telling financial institutions how critical mobile is to their future success. 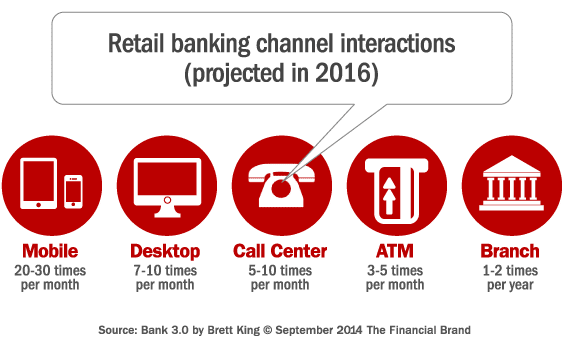 “The mobile experience will be — if it isn’t already — a key driver for acquisition and retention for financial institutions,” implores the team at ForeSee. “More so than any other challenge facing banks today, mobile success will determine a firm’s overall success in the very near future.”

BofA knows that. That’s why they’ve dumped half a billion dollars into their mobile platform already… and CEO Brian Moynihan says the bank still has another half billion to go.

If your financial institution doesn’t have a billion dollars to fuel your mobile banking initiative, don’t fret: all hope is not lost. ForeSee says that regardless of how much money you throw at it, “customer satisfaction with the mobile experience can’t be bought, it has to be earned.”

ForeSee says financial institutions need to iterate and accelerate their mobile development cycle to keep up with rising consumer expectations. To pull that off, ForeSee recommends a robust customer experience analytics platform, specifically one that allows you to benchmark yourself against competitors.

“The key is to make smart, confident decisions based on a true understanding of customer needs and expectations,” ForeSee explains. “Let consumers guide you in prioritizing the improvements that will drive mobile innovation.”

In short, mobile is your new competitive battleground. That’s where banks and credit unions will be fighting for consumers hearts and minds.