Subscribe Now Get The Financial Brand's FREE Email Newsletter
Branches still have one major advantage over mobile: face-to-face interaction. But that will soon change, once everyone has a live, two-way video branch in their back pocket.

As financial services become less personal and more virtual and face-to-face interactions are increasingly being replaced by digital technologies, how can banking providers preserve strong and meaningful relationships with consumers? How can banks and credit unions fully realize cross-selling opportunities if they aren’t able to communicate with them in person?

Face-to-face video banking — when customers and bank staff engage in banking transactions or consultations through remote video collaboration sessions — seems to be an obvious solution. In fact, 93% of banking providers in a survey 52 different countries say they think customer satisfaction would improve if a high-quality video banking service for mobile devices were to be implemented.

The research, co-sponsored by Efma and Vidyo, found that nearly 80% of all banks planning to offer video-enabled banking services. Roughly three out of every five banking institutions are intrigued by the prospect of using video as part of their mortgage, lending, private banking and wealth management services. 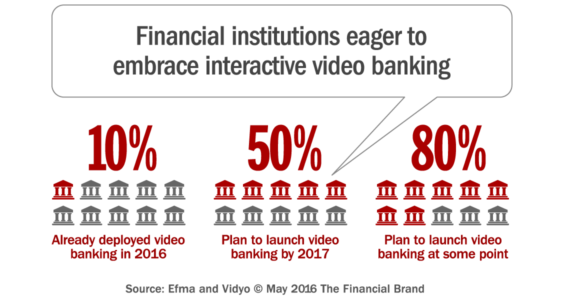 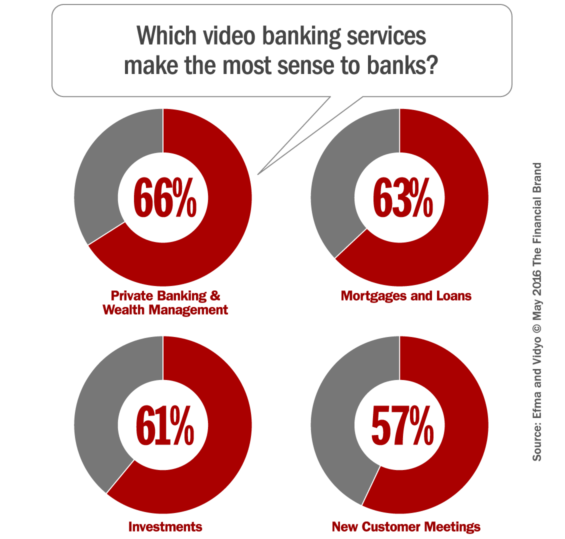 “The findings show that there is a strong appetite for video-powered banking worldwide,” said Vincent Bastid, CEO, Efma. “We firmly believe in the power of the technology to maintain and improve the personal connection between the customer and the bank.”

Respondents also said that click-to-call, call scheduling, call recording and call escalation are the most important capabilities for video banking services (in any channel — mobile, desktop, branch or ATM).

While the notion of interactive video banking has been around for a while (e.g., video tellers), financial institutions haven’t rushed to embrace the technology. Why? Because some of the ideas floating around haven’t seemed very practical — e.g., interacting with product experts via two-way video deployed in a branch environment. Does a consumer looking for insurance or a home loan really want to get in their car and drive to a branch just for a Skype or FaceTime call? Why not just stay at home in your jammies and slippers for a video chat?

Financial institutions may not have been flocking to interactive video systems in branches, but they seem very keen on integrating video into their mobile delivery strategy. In the survey, nearly 70% of banks said they prioritize video banking via mobile (and desktop) over in-branch or ATM availability. 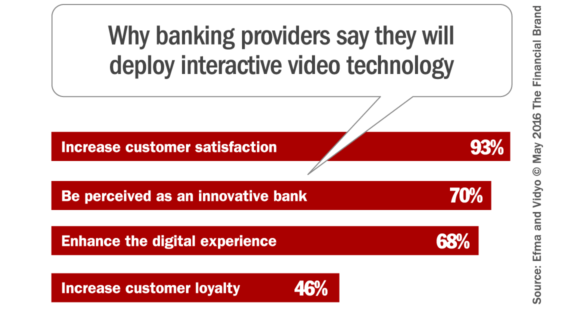 “Nearly half of financial services companies are either using or evaluating video conferencing to interact with customers as part of their omni-channel customer engagement strategy,” says Irwin Lazar, Vice President and Service Director at Nemertes Research. “Adopters are leveraging video as part of their digital transformation strategy to engage with high value customers, build brand differentiation, and to deliver enhanced services via the mobile channel.”

Banking providers have their concerns about video technology though. Respondents in the study viewed security, compliance, cost and customer preparedness (i.e., devices ready for video) as the biggest challenges to deploying a mobile video banking service. Indeed, ensuring a quality experience on a wide range of uncontrolled, consumer-owned devices will present a unique set of issues. How do you deliver high-performance video communication that works on variable internet connections and on a variety of devices and operating systems?

Despite the technology and security concerns, many banks are plowing ahead with mobile video banking services. One successful early adopter is IndusInd Bank. Induslnd launched their Video Branch service in June 2014, making it available to customers via desktop and mobile devices. IndusInd customers are now able to connect with their branch manager, relationship manager or with a centralized video branch executive. The Video Branch offers all the same banking services that had previously been only available via phone banking. 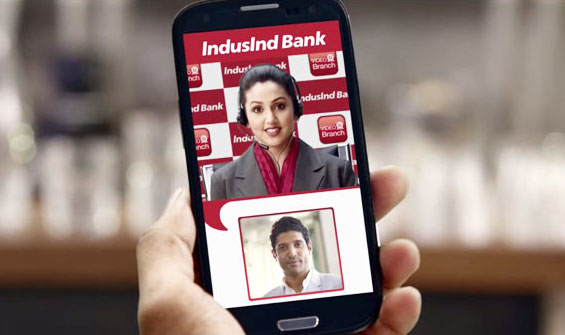 Induslnd supported the launch of its new Video Branch with an extensive nationwide advertising campaign, helping position the bank as innovative, convenient and tech-savvy. One year later, the system was supporting over 1,000 daily video calls with more than 65% repeat usage.

Barclays is another bank that has already deployed video-based banking services. In December 2017, Barclays retail division launched its Video Anywhere service in the UK. The 24/7 service offers customers the opportunity to speak to a video banker via smartphone, tablet or computer. Barclays’ Video Anywhere service was initially available only to customers in their Premier tier, but the bank has announced that the service will soon be available to the broader customer base, with a phased rollout spanning a six-month period.

“Barriers to rapid, wide-spread adoption of video banking tools are quickly being eliminated,” noted Eran Westman, CEO of Vidyo. “The benefits of video banking are quantifiable. Some financial institutions report a 50-80% improvement in their NPS scores after transitioning to video banking.”

Ultimately, banks want a solution that just works. More than 75% of banks in the study defined success in video banking as a video session that is held without technical issue 8 times out of 10, regardless of endpoint or network.