Commonwealth Bank created a whopping 120 gigapixel image of Sydney which users can search to find one of ten $200 wallet prizes placed in secret locations around the city. Ten wallets will be hidden in the photos per day over a ten day period.

The photo at the center of this online scavenger hunt is simply stunning. Commonwealth says the image is the biggest photo ever taken in Australia, with over 8,000 individual frames stitched together to create a seamless composite. The photo was taken on the top of Sydney Tower by Pixelcase, a major player in the world of virtual reality and 360° imaging. (Commonwealth promises technicians carefully reviewed the images to protect people’s privacy, so don’t bother scouring the photo for anything potentially offensive or obscene.)

How detailed is the photo? In this animated GIF, the Anzac Bridge is so far off in the distance that you can’t even see it. But when you zoom in all the way, you can recognize the make, model and color of every vehicle crossing it. You can even read street signs. Ah-mazing!

Clues to help players find the hidden wallets vary in difficulty. Some clues are easier, while others may require research or a web search. If a wallet is not claimed quickly enough, then easier clues will be released later in the day.

When a wallet is discovered, players click on the wallet which triggers a pop-up form. After the player enters their contact info, they are provided with instructions to claim their prize. Shortly thereafter, winners receive an SMS code they can enter at a Commwealth ATM to withdraw the $200 cash.

The wallet scavenger hunt is a deft promotion designed to draw attention to Cardless Cash, a clever feature that allows customers to withdraw cash at ATMs without using their plastic, physical card — all you need is the CommBank mobile app. Users can even arrange for someone else to collect the money on their behalf — an ATM-based derivative of P2P mobile payments. 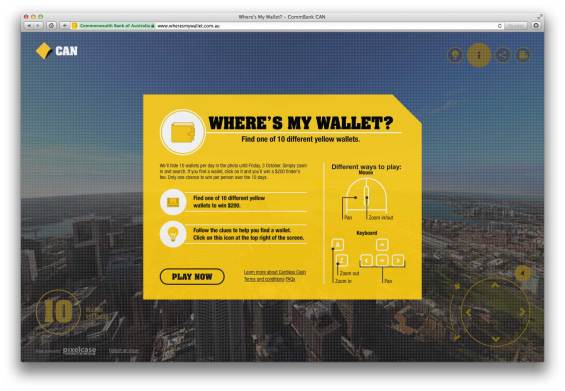 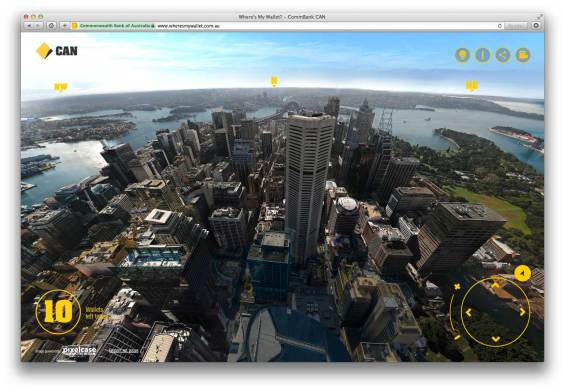 The website at www.wheresmywallet.com.au will only be live between Monday, 22 September 2014 at 12:01 am and Friday, 3 October 2014 at 11:59 pm. Ten wallets will be released at 06:01 am each morning, and will be remain up on the site until 11:59 pm that evening or until they are claimed, whichever comes first. The website will be unavailable on weekends.

The website works on both desktop and mobile devices including tablets. You will, however, need JavaScript enabled on IE7, IE8, IE9, Chrome 35, Safari or Firefox to play the game.

Why This Is Awesome

It’s unexpected. Banks don’t usually think/behave like this — their marketing pretty predictable. This causes consumers to pause and reevaluate their assumptions about big banks like Commonwealth.

It’s easy. You don’t need to know how to do anything except point and click.

It’s fun. Scavenger hunts and similar trivia-based games get more people involved than most other types of contests.

It pushes a cool, practical financial tool. It’s not easy for banks to make financial products engaging (which is one of the main reasons retail financial institutions struggle in social media channels).

It’s hyper-localized. If you don’t know your way around Sydney, you aren’t going to win. This means Commonwealth Bank doesn’t need to worry about people outside its geographic market playing the game and claiming prizes. And his is a common problem with online promotions: people from around the world can overwhelm a page with visits, but if you’re a bank in Australia you don’t care if your promotion goes viral in Uzbekistan.

What Could Make It Better?

Wallets could be hidden throughout the day. This would create sustained interest in the promotion vs. an intense crush of activity when the contest restarts every morning… followed by a long, quiet lull. The Financial Brand showed up one morning when doors opened, and it took only two hours for all ten wallets to be found.

Countdown clock. When the competition is idle and the website is “closed,” it would be helpful if Commonwealth added a countdown clock — “Contest will resume in 04 hours 38 minutes and 51 seconds!”

Let people play with it. When the website isn’t being used for the wallet-finding part of the campaign, website visitors should be able to poke around the virtual Syndey. Instead visitors are shown a static page that basically says “Sorry, we’re closed. Come back soon.”

Add Commonwealth Branches & ATMs. Have a feature that allows users to toggle on and off the bank’s locations around Sydney. This makes particular sense because of the product at the promotion’s center: Cardless Cash.