Fees continue to have a major impact on customer loyalty, as 29% of customers who switched banks in 2010 cite high fees for products or services as their reason for switching.

The percentage of customers who say they “definitely will not” switch banks during the next 12 months has decreased significantly during the past three years to 34% in 2010, compared with 46% three years ago in the 2007 study.

The gap in loyalty intent between customers of larger and smaller banks is considerable, with 41% of customers at smaller banks who say they “definitely will not” switch, compared with 32% at larger banks.

The study also found that 51% of customers in 2010 indicated a preference for online banking, an increase from 45% in 2008. In addition, 7% of customers report using a mobile device to execute such transactions as checking balances, transferring funds and paying bills.

J.D. Power and Associates handed out awards to the banks in 11 different regions that achieved the highest scores in its study. Arvest Bank had the highest overall satisfaction score of any bank in the country, and the only one to top the list in two separate regions (South Central and Southwest).

The Chase/WaMu merger clearly had an impact on how customers felt about the bank. It was ranked last in three regions — California, New England and the Northwest — all areas where the once-popular WaMu had a strong branch presence.

One thing to note about the winners (and losers) below: Regional players seem to have an edge. 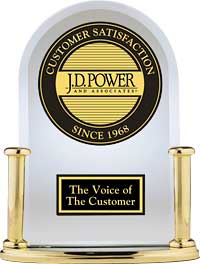 The 2010 U.S. Retail Banking Satisfaction Study is based on responses from nearly 48,000 participants regarding their experiences with their banking provider. The study analyzes customer satisfaction with the retail banking experience based on six factors: account activities, account information, facility, fees, problem resolution and product offerings. The study was fielded in January and February 2010. You can download the entire study’s results here.