Subscribe Now Get The Financial Brand's FREE Email Newsletter
While technology moves forward, Americans still expect to have their issues resolved when and where they choose to do business, whether that’s online, in a branch or on a device. Are Virtual Financial Assistants the answer?

By Amber Sullivan with The Financial Brand

Today’s banking customers want more from their banking experience, and they don’t want to have to wait for it.

According to the Customer Experience in Banking report from Avaya, more than two-thirds of Americans expect a resolution to their issue immediately after their initial contact. And if they’re not satisfied with the service? More than one in five customers would switch banks, and three out of four would take some type of action, such as submitting a formal complaint, telling friends or family, or sharing the bad experience on social media.

What makes this even more of a challenge for financial institutions is that these expectations aren’t for any particular channel. Consumers want to have their issues resolved whenever and wherever they choose, whether that’s online, in a branch or on a mobile device. People expect banks and credit unions need to be everything to everyone — everywhere.

“Consumers are looking for their issues to be resolved quickly, and want answers at the first point of contact,” said Karen Hardy, VP/Product & Solutions Marketing at Avaya. “However, many contact center agents in financial institutions aren’t prepared to deal with a wide range of inquiries, especially in today’s omni-channel environment.”

What really irks consumers, Hardy explains, is when they have to repeatedly explain their issue over and over again as they get tossed from a support “expert” in one channel to another. To improve service moving forward, Hardy says banks and credit unions need to ensure every service representative supporting any channel is properly trained to deal with problems on every platform. 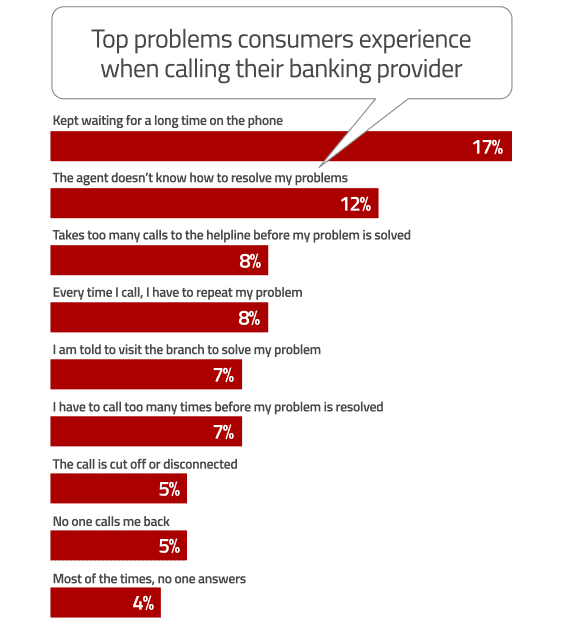 Not long ago, call centers seemed like a the right solution to handle any customer service issues. But according to Avaya’s study, people feel that call centers are lacking on a number of levels. One in six said they were kept waiting on hold too long. One in ten said that when they finally got through to a service rep the agent didn’t understand their problem.

Millennials cited these issues as concerns more than any other generational segment, probably contributing to their preference to communicate with their banking provider via digital channels.

Even though AI and digital banking technologies are making big strides forward, the majority of the customers surveyed still prefer to have their service issues resolved in person. In fact, 38% of respondents said they want to talk to a real live human being — in person — whereas one quarter prefer to speak to a service rep on the phone.

While half those who prefer coming to a branch to meet with a representative are 55 or older, the method of customer interaction may evolve, the principals behind good customer service will remain unchanged.

Are Virtual Financial Advisors The Answer?

Avaya says people are more eager than ever to serve themselves, especially if that means they can spend less time waiting on hold or in line at a branch. Automated self-service in the form of AI could be the solution needed to satisfy today’s impatient and demanding consumers.

In fact, more than a third of all respondents said they preferred to not speak to a human being at all. This preference for self-service and autonomy is growing, and shows that the banking industry will need to keep up with emerging AI technologies to keep digital consumers happy. 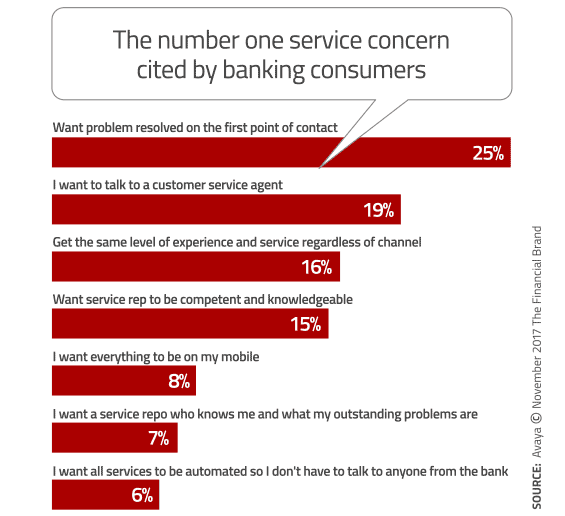 This is where virtual financial advisors can come into play, an emerging technology that helps consumers utilize the self-service options they prefer, while also allowing seamless interaction with a live agent when needed. According to the survey, nearly nine out of ten Americans believe virtual financial advisors would be beneficial when dealing with a problematic transaction, and 85% feel it could lead to faster problem resolution.

When asked about the ways in which a virtual financial advisor might be useful, 40% of those surveyed said they would report suspicious activity on their account, 30% said they would expect a faster resolution of their issue, 21% anticipate more personalized service, and 9% would look for advice on managing their account and budget.

This type of technology can help reduce call center wait times for issues that can be easily and quickly resolved. It also helps guide those who prefer interaction with a representative get to the right person more quickly, since customers inclined to self-service, digital, and DIY won’t also be clogging up phone lines waiting on hold for service agents.