Consumers say they are more satisfied with banks and credit unions, and are less likely to switch when compared with last year. According to the 2011 Bank and Credit Union Satisfaction Survey, satisfaction remains highest at credit unions and small banks, although large banks are showing significant improvement.

The conclusions come from a Prime Performance survey of over 8,000 consumers who had recently been assisted by a representative at a credit union, small bank, large bank or one of three mega-banks: BofA, Chase and Wells Fargo.

Collectively as an industry, the average net satisfaction score across all retail financial institutions increased 5% in 2010. Large banks, and specifically Chase, increased at a faster rate than average — 6% and 12% respsectively. Falling behind the average pace was BofA at 3% and Wells Fargo at 2%.

Small banks have pulled even with credit unions among Gen Y and Gen X customers, while credit unions have increased satisfaction among older members.

“While credit unions and community banks enjoy high satisfaction and customer loyalty, their larger competitors are closing the gap, especially younger customers,” said Jim Miller, President/Prime Performance and author of the report. “If small banks and credit unions don’t live up to customer expectations and provide a more personalized service they run the risk of losing their service advantage.”

The 2011 Bank and Credit Union Satisfaction Survey was conducted in August and September 2011, just a few weeks ahead of BofA’s $5 debit fee bombshell. It would be extremely interesting to see how the results would be affected if the study could be repeated now, after the mass exodus labeled Bank Transfer Day.

While the study did show satisfaction was on the rise, the survey also revealed that some banks — particularly the mega-banks– struggle to win the trust and loyalty of their customers. Many consumers believe big banks put institutional interests ahead of customers, have concerns about fees, and are not willing to refer friends and family to them. And things have only gotten harder for banks since October.

As you look through the data, some of the results may surprise you. If the scores seem really high, remember that people are reflecting on real, personal experiences. Consumers will psychologically separate feelings about banks in general from the interactions they have with their bank. Ask consumers to rate banks in the abstract, and scores plunge. But drill down to specific situations and consumers tend to lighten up: “Yeah, I really hate banks… but that service representative Suzie was really nice and helpful.”

As Filene Research puts it, “It’s like voters who hate Congress but love their hometown Representative.” 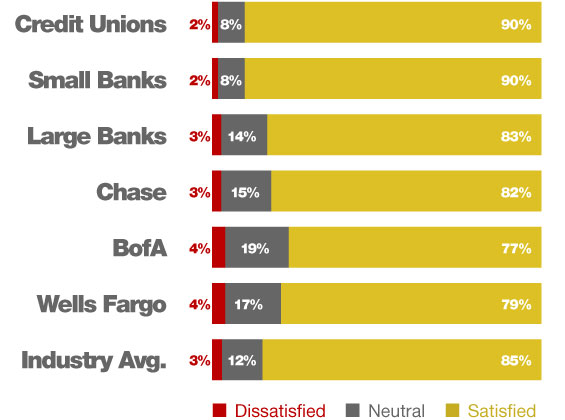 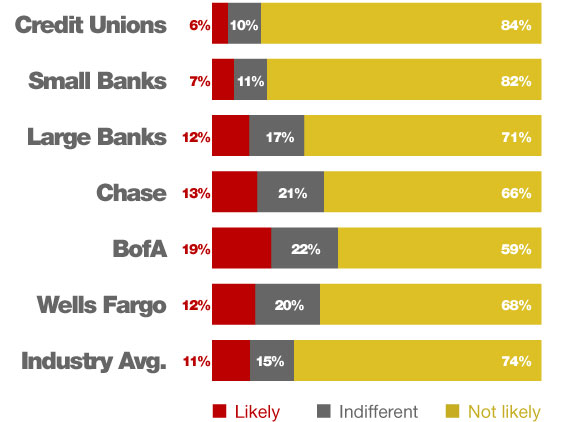 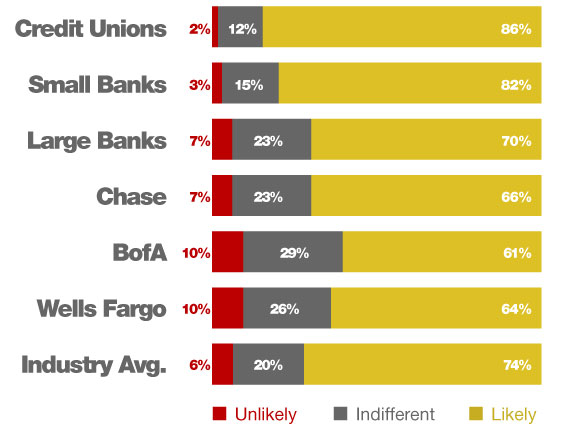 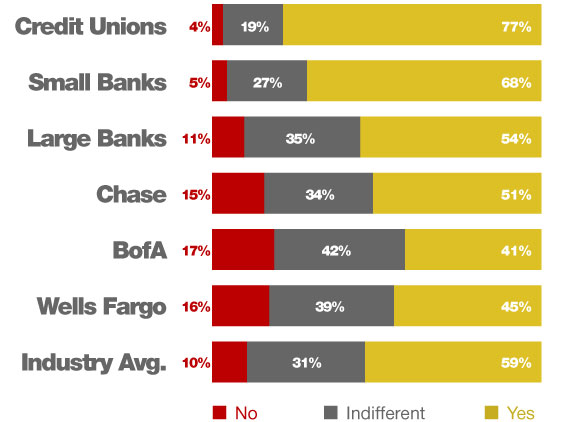 Problems/Complaints With the Bank in the Last Year 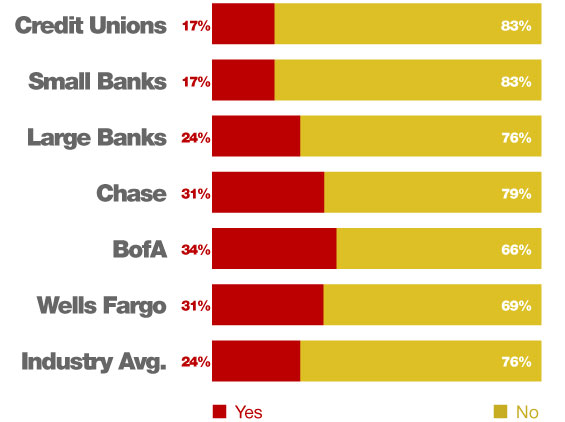