Subscribe Now Get The Financial Brand's FREE Email Newsletter
The banking industry's image and reputation had been on the mend in the last few years. But half of US adults now say their trust in banks has been declining.

American consumers have more choices than ever before when it comes to selecting a financial institution. But just how much trust do Americans have in these institutions? Half of US adults say their trust in banks has declined over the past few years, although only 18% of Americans say the same about credit unions. Nearly half (49%) state their trust in credit unions has remained consistent over the past few years. These findings stem from a Harris poll of 2,537 U.S. adults surveyed between August 13 and 18, 2014.

Local credit unions and local/community banks are the most trusted institutions, with over three-quarters of Americans having some or a great deal of trust in them (77% & 76%, respectively). Local branches of regional banks come in third, with 70% having at least some trust in them.

Big national banks rank second to last, having the trust of only 50% of Americans. Meanwhile, 42% state they have no trust at all or very little trust in these institutions. However, a slightly larger percent (61%) trust local branches of these banks.

Online-only banks are seen as the least trustworthy, with only 39% of Americans having at least some trust and 47% having no or very little trust in them.

Younger generations (42% of both Millennials & Gen X’ers) are more likely to trust online-only banks, compared with just 30% of Matures.

There is also a regional divide. Those in the East and West are more likely to trust these institutions, compared with adults in both the Midwest and South (46% East, 44% West vs. 36% Midwest, 33% South). 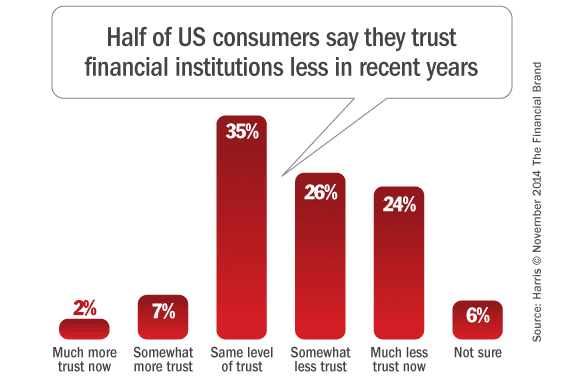 Personal experience is particularly important for older generations. Matures, Baby Boomers, and Gen X’ers are all more likely than Millennials to say this factor has a great deal of influence on their trust (75%, 71%, & 69% vs. 56%, respectively).

At the bottom of this list, only one-fourth of Americans consider an institution’s role in the community (24%) to be greatly influential, with even fewer greatly influenced by what they find about them on social media (12%).

While still small percentages, both Millennials and Gen X’ers are more likely to state social media has a great deal of influence on their level of trust (15% & 14%, respectively), compared with only 9% of Baby Boomers and 7% of Matures.

Which Providers US Consumers Choose for Their Banking Needs

Despite big national banks being among the least trustworthy institutions, they retain the highest percentage of customers, with 45% of Americans stating they are a customer of one of these institutions.

Those in the West are more likely than those in other regions to be a customer of a big national bank (61% West vs. 43% South, 36% Midwest & 42% East).
Americans living in a rural location are less likely to be customers of big national banks, compared to those living in other locales (30% rural vs. 49% suburban & 52% urban).