ACSI releases its 2013 customer satisfaction scores for the financial services industry today. A sneak peek at the numbers gave me a few days lead time to look into this year’s results.

There may be a few surprises for industry insiders, but creditunionistas can rest easy: Credit unions continue to outscore banks on customer satisfaction.

In fact, this year’s score for CUs is up three percentage points from 2012. For 2013, credit unions scored an 85 on ACSI’s customer satisfaction scale, versus 78 for banks. The four largest US banks all scored improvements in 2013 from their 2012 scores. 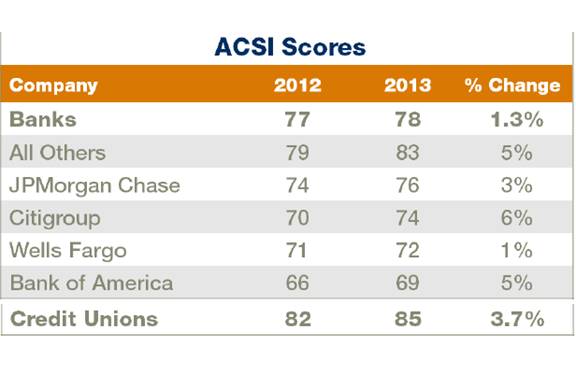 Don't let me rain on your parade, creditunionistas, but some of the ACSI scores make no sense to me.

Breaking Down The Customer Satisfaction Score

First off, let’s look at the credit union score. No doubt about it — relatively speaking (to other financial services firms as well as companies in other industries) — a score of 85 is pretty damn good (tied for best across all industries!).

What did credit unions do in each of those years to warrant the big decreases and increases?

Second, let’s take a closer look at the banks’ score.

ACSI says banks’ overall satisfaction score is 78. The scores for the four largest banks range from 69 to 76. “All Other” banks score an 83.

By my calculations, the top 4 banks account for 50% of the overall score, while the other 7,000 or so other banks are weighted 50%. That seem right to you? If it’s weighted by assets, then it may very well be. If it is, what’s the rationale for doing so?

So tell me, creditunionistas and other financial services industry experts, are credit unions really outperforming banks, overall, or just the largest banks?

Third, let’s look at the satisfaction scores by attributes.

Across 10 attributes, credit unions beat out banks on 8 of them. In a number of cases, not by much.

When I calculate the average score of the attributes, credit unions come up with an 84 (not an 85, as ACSI gives them overall), and banks get an 82 (versus ACSI’s overall score of 78).

I imagine it’s because the ACSI asks respondents for an overall score, and doesn’t just average the components. I guess the sum of the parts doesn’t equal the whole.

As a side note, I’m surprised that “satisfaction with fees” isn’t an attribute that ACSI asks about.

As another side note, if the largest four banks are weighted at 50% of the overall bank score, then I find it very hard to believe that credit unions scored higher for “variety of services available.” Just sayin’.

ACSI scores are more reflective of consumer sentiment, and not customer satisfaction with FI operations and service delivery.

The scores certainly give credit unions some bragging rights. But taking them as fact, or as proof, of operational superiority would be misleading.

The second conclusion? That after reading this blog post, this will be the last year I get an advanced copy of the scores from ACSI.