Subscribe Now Get The Financial Brand's FREE Email Newsletter
The number of financial institutions offering free checking dropped by nearly half in the last year alone. The huge drop is a continuation of a three-year slide that now puts the once-popular account on death row.

According to a study by Bankrate.com, free checking is growing increasingly rare at U.S. banks and looks like it could be on the path to extinction. Only 39% of banks offered a checking account with no minimum balance requirement and no monthly fee, the standard definition of a “free” checking account. That’s down from 45% in 2011, and down substantially from its peak in 2009 when 76% of financial institutions had free checking. 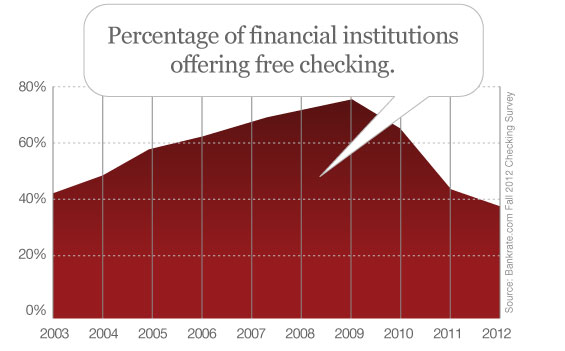 This is Bankrate’s 15th consecutive year conducting the survey, which looks at information from ten banks within each of the 25 largest markets in the U.S.

“We continue to see a decline in the availability of free checking,” says Greg McBride, senior financial analyst at Bankrate. ” And that’s going to continue over the next few years. I don’t expect it to reverse anytime soon.”

“Bank checking account fees have been going up for years, but the trend was pushed into overdrive in the past couple of years,” McBride explains.

In Bankrate’s 2012 Checking Survey, almost every checking fee studied went up, with some bank fees rising 25% or more.

However, another recent Bankrate study showed that 72% of the largest credit unions still offered free checking.

Bankrate also says 72% of Americans said they would consider switching banks if their financial institution raised its fees on checking accounts, up from 64% in March 2011.

Even as more checking accounts have gone from “free” to “fee,” those bank fees have risen steeply. The average monthly maintenance fee for a noninterest-bearing checking account rose to a record high $5.48, an increase of 25% over last year, according to Bankrate. 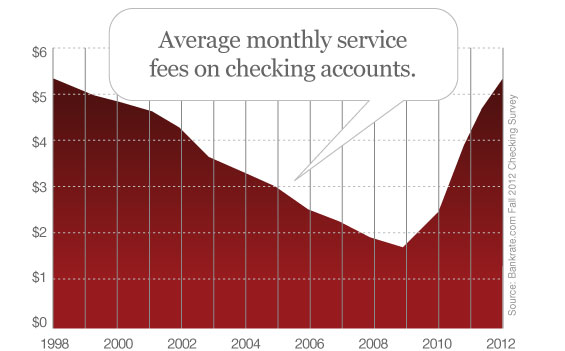 Some banks will waive that fee if account holders average a certain minimum balance, but that hurdle has risen as well. Now, you’ll have to keep an average of $723.02 in your account to avoid a monthly fee, up 23% from last year.

The average interest-bearing checking account now offers a pathetic 0.05% in interest. With an account at the $250,000 maximum insured by the FDIC, that would amount to a measly $125 in interest per year. Whoopee…

Consumers will also need a minimum of $507.60 on average to open an interest-bearing account. While that’s not the highest amount ever recorded in Bankrate’s survey, it’s 14.9% higher than last year’s figure of $441.61. 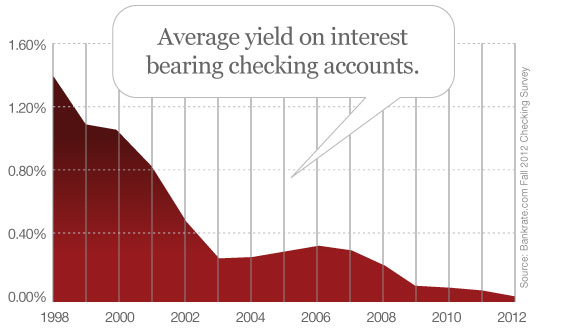 Key Question: Why bother offering interest checking accounts anymore? With rates so low, the only thing a financial institution can expect is scorn and ridicule. That is unless you’re hoping people will manage their accounts foolishly, triggering fees on unsuspecting customers who were thinking they’d be earning interest instead.

In total, that’s a combined price tag average of $4.07 for every out-of-network ATM withdrawal consumers make, a stiff price to pay indeed.

Banks also hit a dubious milestone this year. For the first time, all of the banks surveyed by Bankrate charged non-customers for using their ATMs. That fits in with the overall trend of banks looking for new revenue wherever they can find it. 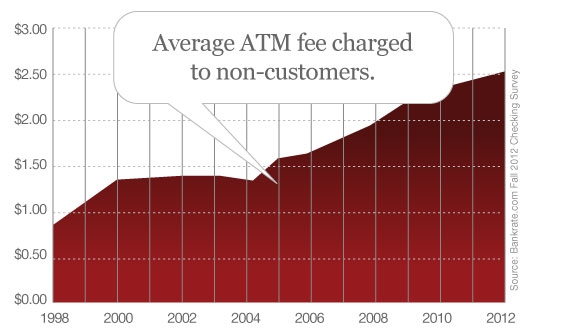 Overdrafts have long been a hot-button issue for consumer advocates because they can pile up quickly once your checking account balance hits zero.

Unfortunately for those who do wind up getting smacked with an overdraft fee, it’s going to sting a little more this year. The average overdraft fee, known in the banking industry as a nonsufficient funds fee, or NSF fee, rose to a record high of $31.26, up from $30.83 last year. The year-over-year increase is about in line with inflation at 1.4%.