The number of free checking accounts continues to decline, following another sharp drop last year. An annual checking study conducted by Bankrate shows that just 45% of basic checking accounts are free of any monthly maintenance charges, down from 65% in 2010. That number peaked at 76% two years ago. Overall, 60% more noninterest accounts carry fees and balance requirements than they did last year.

“Free checking is going away because the economic model that free checking survived on is no longer viable,” says Ajay Nagarkatte, managing director of BAI Research.

Even so, Greg McBride, CFA, senior financial analyst for Bankrate, says free checking isn’t likely to go away entirely for those consumers willing to jump through a few hoops.

Last year, 88% of noninterest accounts were either free or could become free if the customer signed up for direct deposit. This year, the number is 92%, which shows banks are still willing to offer free checking in exchange for a deeper relationship with customers.

“A few years ago, Bank of America moved to the $3 surcharge, which at the time was uncharted territory. Now, it’s the most common surcharge that we find in the survey,” McBride says. “There was a lot of negative reaction at the time, but it didn’t take long before the industry embraced it.” 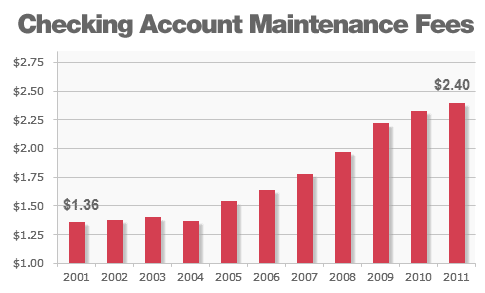 The fee a bank charges its own customers for drawing money out of another bank’s ATM stayed flat at $1.41. That brings the average total customers have to pay for using an out-of-network ATM up to $3.81. If a customer only withdraws $20 from an ATM, they are paying a fee that equates to a 19% surcharge.

The average overdraft/NSF fee rose 1%, from $30.47 last year to a record $30.83 this year. Bankrate says these fees typically rise at or near the rate of inflation. 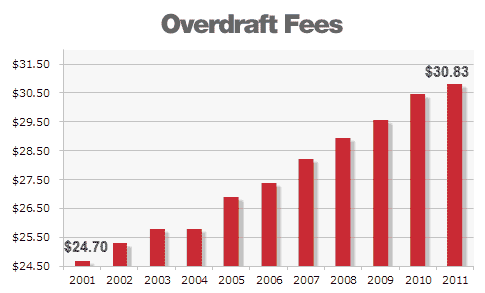 Interest checking continues to become less attractive for accountholders. Yields were down for the fifth consecutive year, falling 2 basis points to an all-time low of 0.08%. Even as yields fell, fees rose. The average monthly maintenance fee for an interest-bearing checking account jumped 8.5%, from $13.05 to $14.05. Meanwhile, the minimum balance on these accounts increased sharply, rising 43% from $3,883 to $5,587.

Bankrate’s data come from surveying the five largest banks and five largest thrifts in 25 of the nation’s biggest markets from August 1-12, 2011. Bankrate asked institutions about terms on one generic noninterest account and one interest-bearing account for the general consumer.