Subscribe Now Get The Financial Brand's FREE Email Newsletter
A perfect storm of three converging factors is sending noninterest income into a nosedive. Understanding the factors is key to managing the risk and plotting a future with sharply reduced fee income revenue. Two steps implemented now will moderate the impact.

In the low-margin environment of the last decade plus, financial institutions have grown to count on noninterest income (NII) to maintain a healthy bottom line.

But as consumers and regulatory bodies push back on fees and traditional sources of NII become less available and profitable, bank and credit union executives are increasingly concerned about finding new ways to fill the income gap. As Cornerstone Advisors reports in its study “What’s Going On In Banking 2022” (requires contact information), the percentage of credit union executives who were worried about NII nearly quadrupled from 2019 to 2021 (from 10% to 39%) and the percentage of worried banking executives nearly tripled (from 11% to 29%).

We have seen declines in NII or key components of NII for banks and credit unions in recent years. It’s worth noting, however, that differences in business models and call report definitions of NII required by banking versus credit union regulators can make direct comparisons imprecise.

What is noninterest income?

NII is broadly defined as income generated from sources unrelated to the collection of interest payments.

It also includes the gain (or loss) from the sale of real estate loans on the secondary market, interchange income, and, in the credit union space, income from unconsolidated CUSOs (Credit Union Service Organizations).

Banks have seen their noninterest income as a percentage of average assets erode over the past ten years. 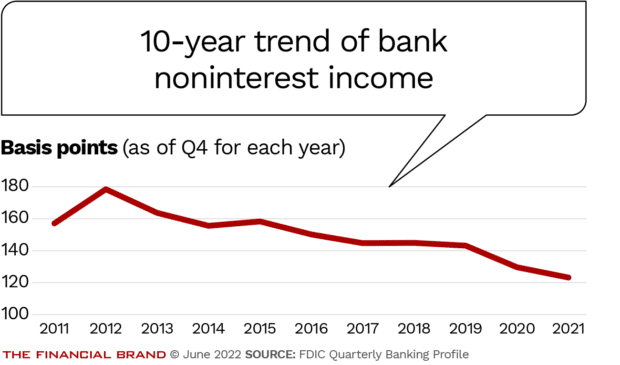 Unlike at banks, NII at credit unions has been relatively flat over the past ten years. However, when we look at the two biggest components of credit union NII — fee income and other NII — we see some dramatic shifts below the surface. As shown in the chart below, credit union fee income as a percentage of average assets has been in decline for roughly a decade. 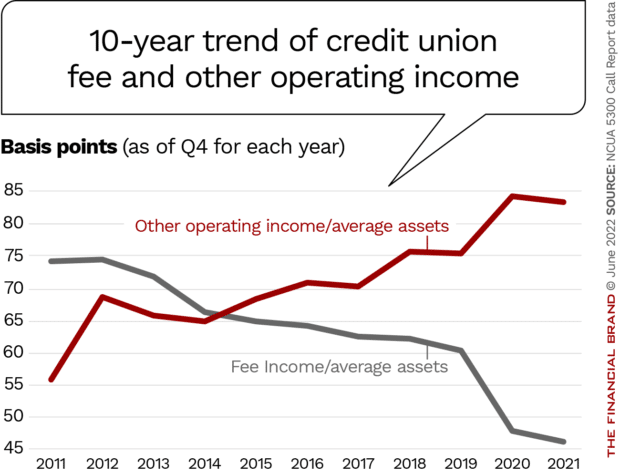 While growth in other NII as a percentage of average assets has helped offset those losses, there are clear indicators future NII growth will be buffeted by powerful market forces.

There are good reasons to believe three important sources of NII will decline going forward. Here are three of the main ones:

Regulatory and legislative scrutiny of overdraft protection programs (ODP). Megan Balogh, director of corporate and legislative affairs at CUNA Mutual Group, reports that governmental bodies have examined ODP for more than a decade and some banks and credit unions have acted to eliminate overdraft fees. Adds Balogh, “We expect to see more proactive work by financial institutions to find the right balance to meet consumer needs through overdraft fees in the months and years ahead — and the federal financial regulators are taking a close look at the issue.”

Consumers are strongly against fees and willing to vote with their wallets. Even though just 16% of households reported having overdrawn their account at least once in 2020 (according to research cited in Filene Research Institute’s Overdraft Protection Programs report), consumers have strong negative feelings about these fees.

In a recent survey by CivicScience, 61% of adult consumers indicated they were somewhat or very likely to switch from their primary bank to a new one to avoid monthly service fees, ODP fees or other related fees. And nearly three-quarters (74%) would somewhat or strongly support a federal law limiting or altogether banning retail banks from charging ODP fees, minimum balance fees or other related service fees on standard accounts.

The competition is dropping overdraft fees. Some neobanks (companies that provide banking services through an app or website) have made a complete lack of ODP fees a key element of their value proposition. Chime and Acorns are notable examples.

Not to be outdone, numerous traditional banks and credit unions have eliminated, reduced or found ways to help consumers better manage their ODP fees. For example, PNC introduced its Low Cash Mode to help its Virtual Wallet customers avoid overdraft fees. And with its recent announcement that it will eliminate all overdraft fees, returned-item fees and overdraft-protection fees in Summer 2022, Citibank is the first of the “big four” national banks to go this route.

Research from CUNA Mutual Group indicates credit union executives expect nonsufficient funds (NSF) and Courtesy Pay fees to become less important as a source of revenue going forward. 28% of credit union CEOs said that NSF/Courtesy Pay fees were a top three revenue driver in 2019, but they expect that figure to drop to 19% in 2022, and to 11% in 2023.

As Steve Rick, chief economist at CUNA Mutual Group, noted in the March 2022 Credit Union Trends Report, we can “expect mortgage interest rates to average 4.25% to 4.50% for the remainder of the year, effectively ending the mortgage refinance boom.”

Another factor driving down mortgage loan originations is the record low inventory of homes for sale. Low inventories are suppressing purchase mortgage originations, which translates into fewer mortgages to sell to Fannie Mae and Freddie Mac. Profits (or gains) on the sales of mortgages represent an important source of NII for both banks and credit unions engaged in mortgage lending.

The rise of buy-now-pay-later (BNPL) and point-of-sale (POS) financing represent a headwind to interchange income to the extent that these financing options are being used in lieu of credit cards. Data from eMarketer shows the number of consumers using BNPL financing rising from 24.9 million in 2020 to and expected 76.6 million in 2025.

How Concerned Should Banks and Credit Unions Be?

Financial institutions of all sizes are highly dependent on NII — some to the extent that they would have a negative return on assets (ROA) if this income were to disappear.

When we look at credit unions, we see that they have been dependent on NII for positive ROA since at least 2011. 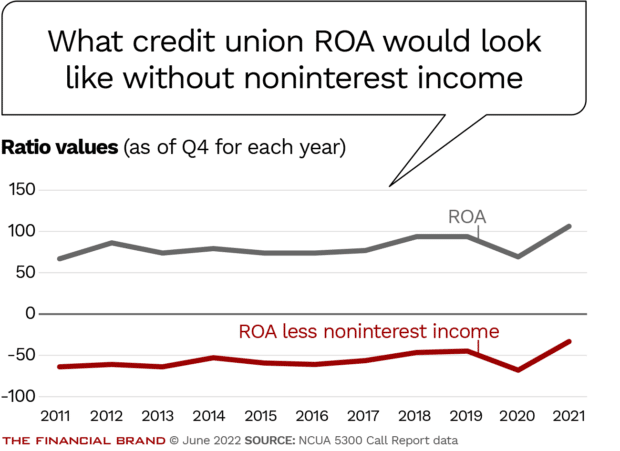 The picture is much the same for banks with ROA less NII running negative over the past ten years. 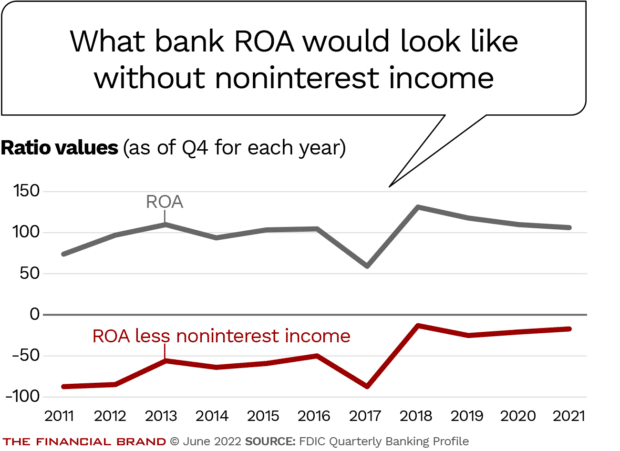 Although a situation where NII would simply evaporate is unprecedented, being highly dependent on shrinking sources of this income is a situation no financial institution can afford to ignore.

There’s no one-size-fits-all way to address these challenges, but there is one word to keep in mind: Optimization.

How can a credit union or bank optimize its business model, cost structure, and revenue streams? There are two primary actions to consider.

1. Closely examine your business model and seek out opportunities to cut costs.

Determine if your institution is overly dependent on challenged NII sources like overdraft fees, mortgage sales and credit card interchange. If you are, it’s time to minimize this dependency. This isn’t an easy ask given the current state of inflation, technology expenses and hiring challenges created by “The Great Resignation,” but the following can help:

To find new revenue streams in these market conditions it’s imperative to offer products and services that deliver tangible value to consumers — that is, benefits that exceed the real or perceived costs of the product or service. Here are two options to consider.

Make sure customers know you offer insurance, retirement and investment services. It’s not unusual for consumers to be unaware of the range of services available through their financial institution.

One closing thought. Consumers still care about trustworthiness. This is an area of strength for traditional financial institutions and continues to be a crucial differentiator when compared to fintechs — leverage it.