Subscribe Now Get The Financial Brand's FREE Email Newsletter
Overdraft services have become a critical competitive lever in the war for retail deposits. Big banks are walking a tightrope between profits and cranky customers.
Subscribe Now!

In May 2012, the Consumer Federation of America surveyed the websites of the fourteen largest banks and collected information on their overdraft fees and practices, processing order for payments from accounts, and fee information for overdraft protection products offered by the bank.

The median overdraft fee is $35, remaining unchanged from CFA’s 2010 and 2011 surveys. The highest overdraft fee in the survey is $37, charged by Fifth Third and RBS Citizens.

Big banks that do not permit consumers to trigger overdraft fees when using debit cards at the point of sale include BofA, Citi, and HSBC. Citi and HSBC also deny overdrafts for no fee at the ATM. The other 11 banks in the survey solicited consumers to opt-in to pay overdraft fees on debit card POS and ATM transactions.

Five banks (Fifth Third, PNC, RBS Citizens, SunTrust, and US Bank) charge tiered fees based on the number of overdrafts in a 12-month period, or by the size of the overdraft. 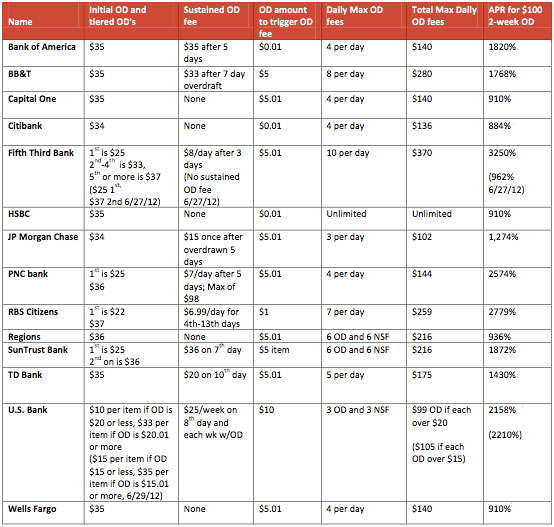 Almost two-thirds of banks charge a second or “sustained” overdraft fee, structured either as a flat fee or a per-day fee. For example, SunTrust charges $36 on the seventh day an overdraft fee remains unpaid. BofA adds a second $35 fee if unpaid in five days. Chase adds $15 after five days of unpaid overdrafts. RBS Citizens charges $6.99 per day on the 4th-13th day an overdraft is owed. Fifth Third Bank is eliminating its $8 per day sustained overdraft fee.

Over 85% of banks set a threshold to trigger overdraft fees, such as $5 total overdrawn in a day before fees are charged. US Bank sets the highest threshold at $10, while four banks (BofA, Citi, HSBC and RBS Citizens) charge fees when the account is overdrawn by less than a dollar.

All of the surveyed banks except HSBC set a limit on the number of overdraft fees that can be charged in a single day (note, however, that HSBC does not permit overdrafts at POS or ATM). Among all others, fees are limited to three per day at Chase up to ten at Fifth Third. Regions and SunTrust will charge up to six overdraft fees and six insufficient funds fees in one day.

Applying the highest overdraft fee to each bank’s daily limit on the number of fees, consumers can be charged in one day overdraft fees totaling $99 at US Bank to $370 at Fifth Third. HSBC has no limit.

CFA also computed an APR for a single $100 overdraft repaid in two weeks, using the top fee charged by the bank and any sustained overdraft fees applied for that time period, computed as if this were a closed-end payday loan. The highest equivalent APRs are charged by Fifth Third (3250%), RBS Citizens (2779%), PNC Bank (2574%), and US Bank (2158%). After announced changes at Fifth Third and US Bank, the APRs will be 962% at Fifth Third and 2210% at US Bank. The lowest-cost two-week overdraft loans are made by HSBC (on checks) and Wells Fargo, both at 910%, followed by Regions at 936%.

In this year’s survey, CFA found more variation in bank processing order, based on the type of transaction. For example, some banks process time-stamped transactions in the order received, then other transactions largest to smallest.