Subscribe Now Get The Financial Brand's FREE Email Newsletter
Product innovation has grown vital for financial institutions to increase revenue. It's also where banks and credit unions are most vulnerable to new competitors. Incumbents have new options to regain the momentum, but taking advantage of them will require at least a partial shift to embedded banking.

The biggest challenge most traditional financial institutions face is not survival — the vast majority are quite profitable. It’s how to grow in a much more highly fragmented market for financial services.

A new analysis by Accenture uncovers some startling trends in revenue growth within different segments of the industry. One finding: Incumbent institutions are seeing a steady shrinkage in their share of the global economy.

In the U.S., banks’ revenue as a share of gross domestic product has fallen from 4.6% to 3.9% from 2009 to 2020, as shown in the chart below. “Low interest rates, fee compression due to heightened competition, an inability to differentiate their offerings and migration of revenues to nonbanks are slowly eroding banks’ share of GDP,” the report states. 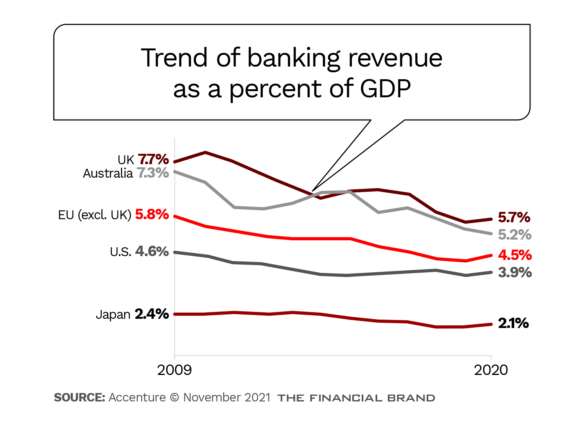 Accenture’s analysis also found that digital-only providers of banking services with “non-linear business models” — i.e. fintechs that rebundle various product components produced by others, usually in specialized areas — have enjoyed compound annual revenue growth of 76% between 2018 and 2020 compared with a growth rate below 2% for the traditional banking sector.

The difference is not primarily customer experience. A great digital experience is necessary, says Accenture, but not enough to win. Michael Abbott, Senior Managing Director, global banking lead, and the primary author of the report, observed in a 2021 presentation that almost every banking app in North America scores 4.8 or higher (out of 5 points).

“It is a sea of sameness,” Abbott observed.

“My belief is that as you roll the tape forward two years from now, the [market] premium in banking is going to be given to those platforms that show they can grow,” Abbott says in an interview with The Financial Brand. “That growth is not going to come through just doing the same thing, it’s going to have to come from innovation — product innovation in particular.”

“The banking product set has stagnated over the last two decades, especially in the regional and community institutions.”

This situation isn’t insurmountable, however. “The whole point of our report is that product innovation is making a comeback and you don’t have to do it all yourself,” says Abbott.

In the 1990s, there was a great deal of product innovation in the card business, Abbott recalls, led by what were then called monoline companies like MBNA and Capital One. Once they grew to a certain size, however, all of these innovative competitors ended up being acquired by, or acquiring, a more vertically integrated banking company.

Abbott believes a similar convergence will occur with many of the new fintechs and neobanks. “They developed innovative products, great customer experience and have been able to scale,” the consultant states, “but fundamentally they lack the balance sheets of the traditional banks.”

But that doesn’t mean financial institutions don’t have to compete for product innovation right now, Abbott asserts. “Otherwise, you risk becoming unable to do the acquiring in the future convergence.”

“Banks are very much starting to understand that if they want to grow, they are going to have to be able to both walk and chew gum at the same time” — be able to continue to run their core businesses, but also innovate simultaneously, the consultant states.

Read More: How Should Banking Respond to Embedded Finance Model?

Why Product Innovation Is Now an Imperative

As Abbott’s point earlier about app ratings suggests, digital banking experiences have improved greatly, making it difficult for both incumbents and neobanks to use that as a point of differentiation.

“The competitive arena has moved to product innovation, with new players attacking the incumbents in the areas where they are most exposed,” the report states. It cites the neobank Chime; the buy now, pay later leaders Afterpay and Klarna, and investment app Robinhood as prime examples.

“Simple product innovation drives incredible growth,” Abbott maintains. “About one out of four new [banking] customers in the U.S. went to Chime during the pandemic. Their main product innovation was getting you your paycheck two days earlier. Any bank could have done that.”

A sustained rising-rate environment in the digital era could trigger a flood of new product innovations.

Rising inflation could significantly impact product innovation, Abbott believes. “If we do end up in a rising-rate environment, it will be the first time that’s happened in a primarily digital world. Because the transparency of rates and the ability to move money has changed dramatically in the last 20 years, I believe that will unleash product innovation that we haven’t seen before.”

The good news for midsize and smaller financial institutions: Technology has been democratized to an even greater degree than ever by all the new players, says Abbott.

Once a bank or credit unions starts to focus on product innovation, he states, they will realize the incredible ability they have to develop or offer products in ways not available even five years ago. Using APIs, he says, smaller institutions can tee up products and “buy by the drink.”

“To me the focus on product innovation is an enabler for banks to define their future,” the consultant states. The key, he believes, is for institutions, especially those with a significant market share, to avoid thinking only about defending what they have rather than attacking what they need to go after.

Why Embedded Banking Is Not a Fad

Abbott says most traditional banking providers play what he describes as “a 10% game,” meaning they’re only tapping a small portion of the available market — what falls within their own brand or within their geo-defined market. By contrast “if you think of your bank as a series of APIs that can be used by anybody, it opens up a much larger addressable market,” Abbott states. “When you can look at embedding your banking services into other products, all of a sudden you start to play a 100% game.”

He points to how Goldman Sachs has embedded small business lending into Amazon’s ecommerce platform and how Stripe is working with Goldman, Barclays and others to put treasury services into offerings that then go into Spotify.

Accenture’s report goes into detail about the differences between the traditional vertically integrated banking model, focused on offering primarily their own products in their own channels, and non-linear models.

In the report’s words, the latter consist of “Banking players that have unshackled themselves from vertical integration and moved to more adaptive business models. This group includes ‘packagers’ [e.g. neobank N26] that assemble and distribute their products in combination with financial products from other companies, as well as those that distribute their products via other players [e.g. Goldman Sachs with Apple Card and other banking-as-a-service arrangements].” 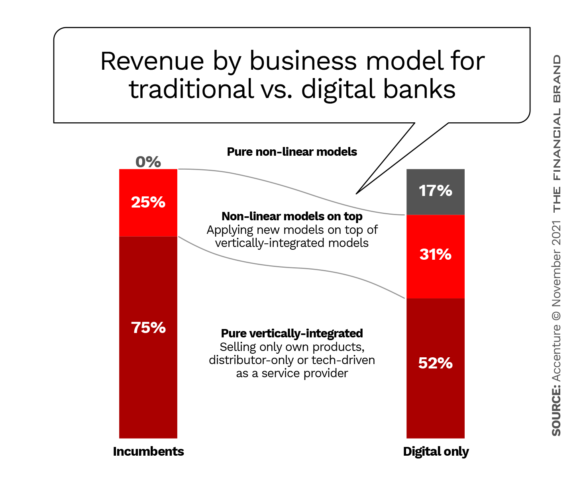 The firm concedes that “few large banks will want to jettison their vertically integrated businesses as they are still the engine of profitability.” But it notes that there are also numerous opportunities for them to introduce new products and offerings in discrete parts of the value chain. If they do, Accenture projects an overall revenue gain of nearly 4% for incumbents who adopt some form of non-linear banking. 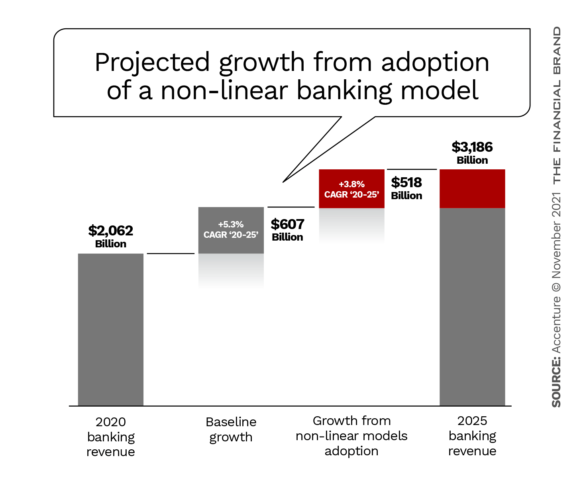 “For those banks that don’t see themselves changing their legacy technology and operations quickly enough to make that a reality,” the report states, “the alternative is to build a parallel tech stack and ops capability that still allow participation in a fragmented banking market while tolerating some duplicate costs.”

Still, Abbott believes “the real winners in the future will be the innovators — whether it be a fintech or a traditional financial institution — who take unbundled components from multiple sources and rebundle them for their markets, So they don’t have to ‘manufacture’ everything anymore.”