Subscribe Now Get The Financial Brand's FREE Email Newsletter
In the 44 states that now have some form of legal marijuana use, nearly 700 banks and credit unions are already involved in cannabis-related businesses banking. But if Congress passes clarifying legislation — which may happen soon — the pot banking market will really fire up.

A $52 billion question has lingered in the air far longer than the smoke from any smoldering joint: Will banks and credit unions deem the rewards outweigh the risks and burden of serving state-legal marijuana-related businesses?

Several hundred already do to varying degrees, but large, national entities including the major credit card companies don’t. The ongoing tension between the 44 states that legalize cannabis sales in one form or another and the federal blanket condemnation of pot as a “Schedule 1” narcotic (high potential for abuse) creates a full stop for the majority of banks and credit unions.

But the stakes are enormous and growing. The California Cannabis Industry Association pegs the current national marijuana market at $52 billion (of which California alone tallies $5.6 billion, rising to $7.2 billion by 2024.) Analysts at Secured Finance Network predict the industry will have a $77 billion impact on the economy by 2022. Rep. Ed Perlmutter, Democrat of Colorado, notes the legal cannabis industry supports 321,000 jobs across the country, with a job growth rate estimated at 250% by 2028.

As it is, financial institutions are dealing with the situation in vastly different ways. Most that offer cannabis-business services tend to underplay that fact to avoid possible reputational risk. Plenty of people still regard recreational pot use as unhealthy, immoral or both. While more than twice as many banks as credit unions are involved (515 versus 169 as of first quarter 2021), credit unions tend to be more open about it. 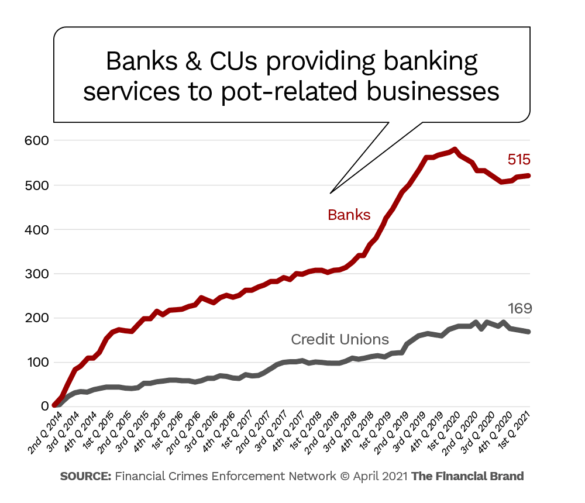 For example, North Bay Credit Union, Santa Rosa, Calif., enthusiastically embraces local cannabis business accounts. It explains on its website: “Legal businesses in the state that need to remit taxes, make payroll for their employees, and pay operating expenses such as rent and utilities have to do so in cash because they cannot get a bank account. … A business owner should not be walking city streets with a duffle bag full of cash to pay her bills.”

Other institutions eschew the pot business. As detailed in an anecdote by Secured Finance Network analysts, the California branch of a national bank summarily terminated an account with a law firm after it determined the firm had a client relationship with a state-licensed marijuana business.

Banks and credit unions are reluctant to serve the pot business over regulatory concerns, but four out of five banking execs favor having the federal government allow it.

“Even when banking institutions are willing to offer state-legal marijuana businesses access to banking services, it’s often a relationship that the bank wants to keep secret in fear of the stigma it may convey to its customers, and most importantly, the potential for prosecution by the federal government in violation of a plethora of federal laws,” say the analysts, Richard Pollak and Tenzin GGT [GGT is his name, not an abbreviation.]

A Lot Depends on Where You Are

Banking providers most open to offering and advertising pot-related financial products not surprisingly tend to be located in the 16 states, two territories and the District of Columbia that have legalized marijuana for adult recreational use. Colorado and Washington were the first two states to do this, in 2012. 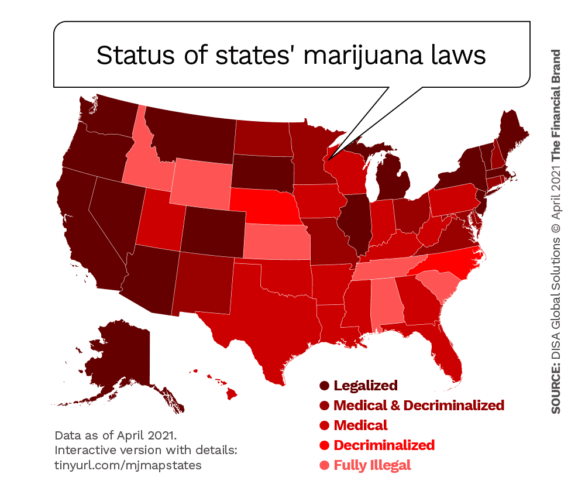 In early 2021, Sundie Seefried, CEO of Partner Colorado Credit Union stepped down to become the CEO of a new cannabis banking company that combines Partner Colorado’s private banking subsidiary and its CUSO into one entity — Safe Harbor Financial.

Seefried, who literally wrote the book on how banks, policy makers, and regulators can bring stability to this rapidly growing industry, states that “This transition will allow me to give my undivided attention to all matters concerning cannabis banking and the expansion of the program.” As she told Payments Source, “The upside is that smaller firms can battle for state cannabis dominance while the large organizations like Visa, Mastercard, and the biggest banks stay on the sidelines waiting for the national government to act.”

Absent final legislative action, the federal government’s oversight so far has treated the legal/illegal nature of the pot business primarily with an anti-money laundering approach. Treasury’s Financial Crimes Enforcement Network (FinCEN) has been the lead federal agency in this area, issuing detailed guidance in 2014 that laid out stringent know-your-customer and other due-diligence rules.

FinCEN notes that the decline in institutions providing banking services to pot businesses, as shown in the chart appearing earlier, may have been prompted by Covid-19 closures of some marijuana businesses and/or the time lag in filing related Suspicious Activity Reports.

The decline may also have been related to an action taken in 2018 by then-U.S. Attorney General Jeff Sessions, who rescinded part of the 2014 guidance (the so-called “Cole Memorandum“), thus negating the permission for financial institutions to safely provide services to marijuana-related businesses.

This NCUA order ties into what state regulators, where pot is legal, require of banks and credit unions getting into the business. As an example, North Bay Credit Union’s website lists extensive cannabis account requirements. It also explains how it monitors and reconciles sales activity, uses armored car service to transfer cash directly to the Federal Reserve Bank, and has enhanced its security systems. “We submit voluminous reports to federal agencies and are the de facto eyes and ears of law enforcement for the movement of funds through the accounts,” the institution’s website states.

Speaking to CUSO Magazine, North Bay CEO Chris Call said, “I would be hesitant to tell a small credit union this is a growth option because it’s a lot of work. This can bring with it a lot of headaches and issues you may not want to grapple with.” (North Bay has assets of just under $100 million.)

Legislative Change Could Clear the Uncertainty

The SAFE Banking Act would allow banks and credit unions to service not only state-legal marijuana growers and retailers, but also their ancillary servicers — the lawyers, accountants, transporters, and others that the pot businesses rely on. Indications are that this time around the new Senate might be more receptive to the bill. Essentially this would have the effect of restoring the spirit and intent of the Cole Memorandum.

Rep. Perlmutter, in reintroducing the bill, said: “The genie is out of the bottle and has been for many years…As we begin our economic recovery, allowing cannabis businesses to access the banking system would also mean an influx of cash into the economy and the opportunity to create good-paying jobs.”

View from the Top:

While President Biden historically has not supported marijuana legalization, he has supported decriminalization.

Senate Banking Committee Chairman Sherrod Brown, Democrat of Ohio, said he is open to advancing the bill, according to Marijuana Moment, but is most concerned with reforming drug offense sentencing at the same time.

Should the SAFE Banking Act become law, it is conceivable that more banks and credit unions would consider taking the plunge. To be sure, banking the legal pot business will still depend on stringent BSA compliance. Safe Harbor Financial’s Sundie Seefried told Banking Dive that BSA will continue to deter many institutions from entering the business.

On the other hand, a CUSO Magazine editorial maintains that the cannabis industry “offers high reward potential for those credit unions willing to take the risk and put in the work.”

Needless to say, if Congress removes the regulatory uncertainty, some of the banking industry’s heavyweights may move off the sidelines.