Subscribe Now Get The Financial Brand's FREE Email Newsletter
Some business leaders assume the Great Resignation ended months ago, yet new data confirms it's still going strong, particularly among Millennial and Gen Z workers. The trend is forcing banking leaders to better understand how to hold onto (and attract) financial institution employees.

Some will argue we’re out of the woods of the Great Resignation, which hit toward the end of 2021. Yet, just because the headlines stopped using the term ‘Great Resignation’ as often doesn’t mean it’s over.

In fact, the United States workforce is still living in the thick of it.

“Since 2021, records have been racking up for workers prepared to voluntarily leave their jobs. With 4.3 million people quitting their jobs in May [2022], the number of resignations is still virtually unchanged from last year,” says Fortune.

In fact, the number continued to hover at 4.2 million people quitting their jobs in June 2022, according to the Bureau of Labor Statistics. Many banks and credit unions are still scrambling to attract and retain employees.

As the term ‘Great Resignation’ has retreated from social media and banking conversations, new terms have popped up to replace it. EJ Kritz at ath Power Consulting says the evolving situation should be called the ‘Great Reflection.’ Others, like software company beqom, refer to it as the ‘Great Realignment.’

McKinsey calls it the ‘Great Attrition’ and the ‘Great Renegotiation.’

“What we are seeing is a fundamental mismatch between companies’ demand for talent and the number of workers willing to supply it,” a McKinsey report reads.

Don't let the world convince you 'The 'Great Resignation' is over. It just keeps getting a new name.

Whether you agree the ‘Great Resignation’ is still in play or not, it’s undeniable it has left a deep imprint on the banking industry’s workforce. If banks and credit unions can learn what employees want, and how to solve office-related issues, the era could symbolize a change for the better in the banking workplace.

The Realities of the Current Banking Workplace

For starters, Covid-19 concerns are weakening, but people still like the flexibility of working from home. Yet companies are beginning to stiffen their resolve for employees to return to the workplace. Some, including Goldman Sachs and Morgan Stanley, dropped Covid vaccination requirements for employees in the workplace.

Even so, the Great Resignation emphasized the need for a new work location structure. Robert Half, the HR consulting firm, says hard return-to-office plans could accentuate resignation issues. In fact, half of individuals working from home said they would seek a new job with remote options if their current employer forced them to return to the office full time. Working parents and Millennials are the most likely to quit, the company states.

But, that doesn’t jibe with most working environments.

“Currently, only one in three senior managers support long-term hybrid schedules (where staff can divide time between the office and another location) and employees’ ability to choose where they work,” the Robert Half research reports. “Those in technology (37%) are most open to flexibility.” 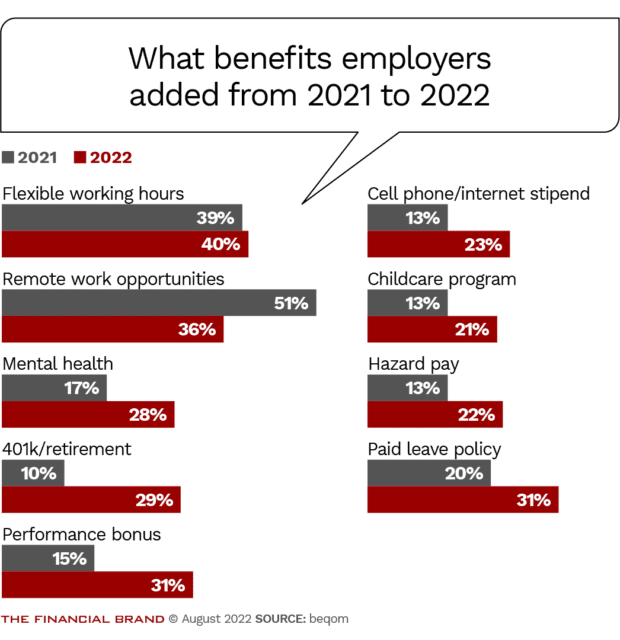 The Robert Half survey wasn’t exclusive to the banking industry (although it did include a subset of experts in finance), which raises the question: do the job quitting numbers signify an issue in banking?

Laura Andress, Executive Director at Arvest Bank, told Arkansas Business she “doesn’t think banking as an industry is immune” from the hiring crunch. Arvest so far hasn’t had a substantial issue with turnover, she said — the bank’s rate has hovered at 19% for years. However, the national average for all businesses is well above that, sitting at 47.2% in 2021, according to the Bureau of Labor Statistics. The BLS rate for “Finance and insurance” was 26.3% the same year.

Indeed, more than three out of five employees (65%) in the U.S. had looked for (not left) a job in the past 12 months, according to beqom.

The Great Resignation isn’t expected to slow its trajectory any time soon, Deloitte points out. The consulting firm adds that although “job loyalty is up slightly from last year, four in ten Gen Zers and nearly a quarter of Millennials would like to leave their jobs within two years, and roughly a third would do so without another job lined up, signaling
significant dissatisfaction levels.”

There are several factors playing a role. In beqom’s report, seven out of ten U.S. respondents said they would switch jobs for more flexible hours. 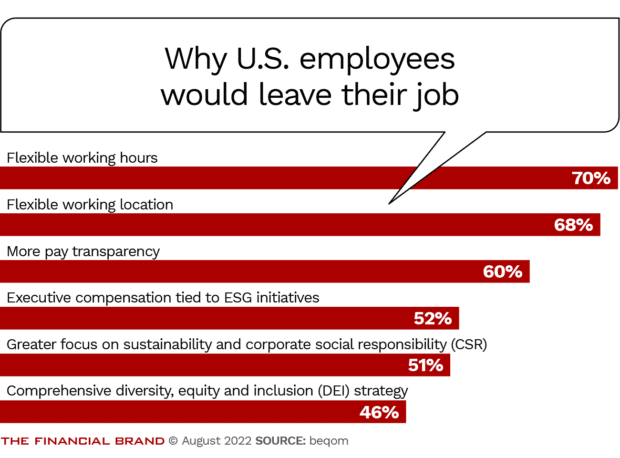 Gen Z and Millennials are particularly strong gauges for what the future of the banking workplace environment will look like in coming years. Gen Z alone will make up well over a quarter (27%) of the U.S. workforce by 2025, predicts Business Insider.

Right now, there is contention between traditional mindsets in a workplace and the younger populations who want meaning in their job and a flexible work lifestyle.

“Older thought leaders and CEOs want Gen Z in the office, and say their expectations for work are too high,” Business Insider states. But Gen Z wants more, and has been flexing their power to get it.

That resistance is part of what created the ‘Great Resignation’ — and Gen Z likely won’t budge on their demands.

The tension between what employers expect from Gen Z employees and the workplace standards Gen Zers expect helped fuel the 'Great Resignation'.

“Some want to be in the office. Others are content to stay at home. Some are in and out of the office,” says Business Insider. “But the location itself doesn’t matter — Gen Z workers care about doing work that matters to them and that work is happening on their own terms.”

Most of the resignation mindset is attributed to burnout, which is already happening significantly among Gen Zers and Millennials. Deloitte found that roughly half of both Gen Z (46%) and Millennials (45%) say they “feel burned out due to the intensity/demands of their working environments” and similar percentages say they have already seen others quit due to workforce pressure.

Three quarters of both Gen Z and Millennials say working remotely is their preference, because it frees up time to pursue their interests, in addition to saving money and spending more time with family, Deloitte reports.

Suggestions for How Banks Can Cope

Sometimes it is both realistic and makes economic sense to have employees work from home and grant them flexible hours. But not every institution can, or wants to, accommodate this.

“Employees like the idea of bankers’ hours until they see it’s not true anymore,” Cody Knight, CEO of Piggott State Bank told Arkansas Business. “Our managers are sometimes dealing with banking issues way into the night. We come up here and fix customers’ debit cards at midnight.”

The majority of employees in the U.S would prefer to have a higher base salary than a performance-based bonus.

Every bank and credit union must find an arrangement that works best for their institution and its employees — it won’t look the same everywhere. But there are a few items on everyone’s bucket list.

For instance, most employees would prefer to start with a higher base salary to work from, rather than annual performance-based bonuses, according to beqom.

“Technology is moving fast, and there are a lot of new gadgets and systems,” Geeslin told BAI. Financial institutions should offer refresh training sessions every four to six months, he said. “You have to keep your employees up to date.”

“You have to show them that this is an opportunity where they can help people plan their finances and improve their worlds,” said Peterson.