Subscribe Now Get The Financial Brand's FREE Email Newsletter
Just about every bank and credit union in America goes up against BofA. Is the giant invincible? No organization is, but given its scope and the fact that the bank's formerly disparate parts are working more like a whole, its competitive power has grown.

There’s much to be said for perseverance. The country’s second-largest financial institution by total assets has steadily welded and bolted — or perhaps more accurately — has digitally integrated its disparate operating units, platforms and systems.

Because this gargantuan transformation has been a decade-long endeavor, during which the banking world has been mesmerized by the rise of fintechs and the threat of a big tech incursion, Bank of America’s growing digital capability has been hiding in plain sight.

Flush with the success of many of its digital-banking initiatives — including its artificial intelligence-powered virtual assistant Erica — the Charlotte-based institution is not averse to strutting its stuff. In a media and analyst presentation in late August 2020 two of the bank’s senior retail banking and technology officers even went as far as to enumerate the number of patents the bank had received (184 in the first half of the year), as a counterpoint to a lingering belief that the big bank isn’t really that innovative.

A more startling figure BofA released is that through eight months of 2020, the bank had already made more than 800 enhancements to its mobile banking app. One of these enhancements was the focal point of the presentation and exemplifies the kind of internal coordination going on at BofA.

Where previously BofA clients that have a relationship with Merrill (formerly Merrill Lynch, which BofA acquired in 2008), Bank of America Private Bank, and various other investment-related accounts had to use separate apps to view their different relationships with the bank, now they can view all of their financial information in one app. Consumers can access and execute trades directly in the Bank of America app, for example. In addition, Erica now supports investment-related inquiries regarding trading, portfolio performance, quotes and holdings.

It should be noted that Bank of America hasn’t achieved some digital transformation nirvana quite yet. The bank, along with other of its large-bank peers, stumbled at the outset dealing with the hastily contrived Paycheck Protection Program. And its J.D. Power ranking for retail banking satisfaction is below the average of the large-bank category in every region, although it has done very well in the research firm’s Retail Banking Advice ranking. Still, there’s a lot going on at BofA that other financial institutions should know about.

Almost All Interactions Are Digital or Automated

Beyond the new app integration, David Tyrie and Aditya Bhasin gave numerous details and insights regarding the bank’s retail banking performance and initiatives, with a particular focus on digital options. Tyrie is head of Digital, Financial Center Strategy and Advanced Client Solutions, while Bhasin is CIO and Head of Consumer, Small Business and Wealth Management Technology. Their titles reflect the convergence within the massive organization that is beginning to reap benefits. Tyrie also discussed branch-related changes. 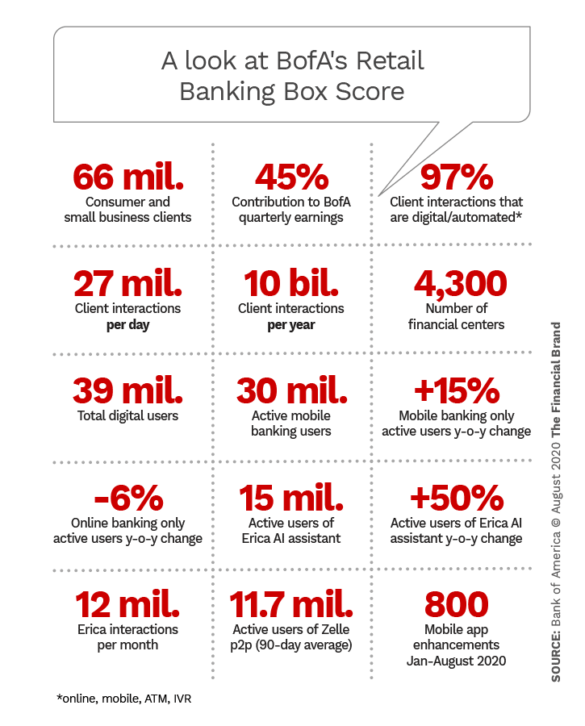 As can be seen in the statistics above, the vast majority of Bank of America’s retail transactions — 97% — are digital or automated. That includes ATM transactions and calls handled by the bank’s integrated voice response (IVR) system. Tyrie states that 80% of the 540 million calls coming into the bank’s call center annually are handled by the IVR.

Despite having 4,300 branches (or “financial centers,” as it calls them) and having a strategy emphasizing high-tech and high touch, Tyrie states unequivocally that BofA’s associates are trained to deliver client engagement in the same way: “Digital first always.” If you speak with any Bank of America associate the first thing they’re talking about is interacting with us in a digital fashion,” he states.

That may seem like a contradiction to some observers, but Tyrie and Bhasin explain the concept this way:

“High tech for us is about bringing together banking, investing and borrowing and all of the needs that you have as an individual — whether it’s about learning about those things, planning, taking action or monitoring those things — anytime, anywhere,” says Tyrie.

“Where high tech and high touch come together,” Bhasin adds, is at any point where a consumer interacting digitally wants to talk to somebody. They can do that right within the app with a direct click-to-dial to someone, he states, or they can set up an appointment to meet with someone. “High tech that can seamlessly hand off to high touch and fully integrate with high touch,” says Bhasin, “is where we believe there is competitive advantage.”

Read More: How Changing Habits Will Impact the Future of Branch Banking

Erica and Zelle Usage Up Sharply

It shouldn’t be too surprising that an already popular and fast growing digital feature — BofA’s AI-enabled virtual assistant, called Erica — got a big bump from the pandemic. Tyrie says Erica’s activity — about 12 million completed interactions every month — is roughly double what it had been in 2019. That works out to an average of 363,000 a day, an 88% jump year over year. 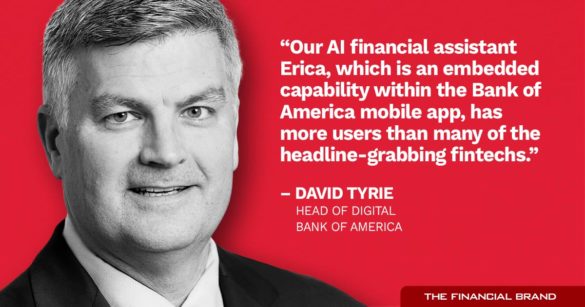 Active users of Erica increased by five million in the first half of 2020, bringing the total number of users to 15 million. The virtual assistant, which launched in June of 2018, functions within the overall Bank of America mobile app. As Tyrie states, “Erica has more users than many of the headline-grabbing fintechs.” A chart shown during the presentation backed this up. Erica has 15 million active users compared with Chime’s eight million, N26’s five million and Varo’s two million. Erica on its own even outpaces online banks Ally (8.5 million) and Marcus (four million), according to figures compiled by BofA.

Although he didn’t put specific numbers on the trend, Tyrie says Erica’s interactions are becoming increasingly driven by its AI-powered insights, not by simple account balance queries.

These insights are personalized to each user and show up as a light bulb at the top of the app screen indicating one or more insights each time a user logs in. Bhasin gave a live example from his own app. One insight told him of a refund from Target. Another was a review of his spending for the month, which, it said was a bit higher than his normal month-to-date spend.

“I can view this spending by category,” he explains, “or by time. I can do it by account. Or I can learn more about budgeting. This is happening real time in the app and it’s personalized to me.

“We call this delivering advice at scale. Fundamentally the software is actually helping our clients live a better life.”
— Aditya Bhasin, Bank of America

“We call this delivering advice at scale,” says Bhasin. “Fundamentally the software is actually helping our clients live a better life, which is really what they’re asking for us to do.”

The person-to-person payment product, Zelle, is also on a tear at Bank of America. In the second quarter, 11.7 million active Zelle users sent and received more than 117 million transfers, a 70% increase year over year, according to the bank. “This is one of the fastest growing areas we have,” Tyrie states. The company has introduced several of its own unique features to the P2P product. One of these, called “Ready Friends,” is a visual indicator of whether a recipient chosen by a sender is registered and set up for Zelle on BofA. “People want to trust who they’re sending the money to,” Tyrie notes.

At 4,300 locations, Bank of America’s branch network is among the largest in the country. And it’s still growing. A bank spokesperson indicates that the expansion and modernization plan updated in 2019 is still in place. The plan called for 90 new branches in 2019 and approximately 260 more through 2022.

While David Tyrie didn’t address branch expansion plans during his presentation, he did say that by the end of 2021, the bank will have upgraded every one of its financial centers. “We’ve had to modernize and bring a whole new look and feel because people aren’t coming in to do transactions. They’re coming in to engage with our associates to help provide professional advice about meeting their goals and servicing them in very different ways.”

In addition, the executive stated that an experiment with unmanned financial centers had proved to be successful and that the bank has deployed more than 100 of these small facilities. One version, called an Advanced Center, incorporates a “video concierge” or self-service kiosk to direct customers as needed to a dedicated room where they can be connected to an associate for private and secure conversations over video.

A smaller version is basically a booth with telepresence and an ATM.

“It’s been very well received and is part of our expansion plan,” says Tyrie about the unmanned facilities.

Read More: How Bank of America Became a Tech-Driven Powerhouse

Other Bank of America Retail Initiatives

Beyond branches. Bank of America does business with nearly one out of every two U.S. households, according to Tyrie. In addition to its network of financial centers and ATMs, BofA has partnered with some of the largest corporations including Apple, Microsoft, Google, SpaceX and Nike to place financial centers on their properties. In addition, Tyrie states that the bank partners with hundreds of companies as part of their benefits package. Consumers can access 401k plan information that the bank administers through Erica, he adds.

Look for online to grow again. Mobile banking has been where most of the digital banking growth has occurred in recent years, compared with online (computer-based) banking. BofA’s online banking user base shrank, as noted in the graphic above. But Tyrie believes that could change over the next couple of years.

As he stated during the presentation, “We introduced the first stage of a new solution called Life Plan. You can [use it] to set goals, be educated on different ways of meeting those goals, create a plan, monitor it and get updates.” This financial tool will boost online banking, he states. “People like to do planning online. They like to do it on a Saturday on their desktop,” while they do more of their transactions on mobile.

Changed ATM interface. Tyrie explained that during the fall of 2020 Bank of America will upgrade to a more modern user experience on all 16,800 of its ATMs. “It’s on the same platform as our mobile app,” he states. “So they should look and feel very similar. In the future you will be able to start something on your phone and pick it up at the ATM. You can already preorder cash now.”