For those who don’t know, Google Glass is the much-anticipated technological gadget that Google plans to launch publicly next year. It is a wearable computer, with a webcam and an optical display facing the user’s eyeball. There’s a built-in microphone, and it’s GPS capable — all packed into one ultra sleek headset.

Google Glass users can perform a multitude of hands-free tasks: look at something and say, “Take a picture.” It takes a picture. Record videos of your grandkids simply by saying so. Get directions to the theater — projected right in front of you onto your Google Glass lens. If you want to know how say “cheese” in Chinese, just ask it to translate for you. It’s pretty neat stuff.

The bank’s Google Glass app will allow users to connect to the internet and carry out all kinds of operations via voice commands. For instance, a customer could connect with Banco Sabadell’s contact center, allowing the bank’s service specialist to see — in real time — the same thing the user is seeing at home. Users can use the app+hardward interface to look up account details (e.g., current balance). The app also helps users find the nearest ATM using the built-in GPS system.

“The mobile internet’s natural evolution will be ‘living services,'” says Pol Navarro, Director of Channels and Innovation at Banco Sabadell. “Users will want to be able to interact with firms through many different devices, and as quickly and intuitively as possible.”

Banco Sabadell says work is currently underway to integrate additional tools into the application, such as their “Instant Check” mobile deposit service. How cool would that be…? Deposit a check just by looking at it and saying, “Deposit Check.”

Back in June, PrivatBank in the Ukraine gave its customers a taste of what they can expect once the bank’s Google Glass app is available — pay bills by taking pictures of them, transfer funds between accounts, pay for purchases using voice commands or by snapping images of QR codes. You don’t have to speak Ukrainian to find this video fascinating.

According to Alex Bray, a banking industry analyst and retail channel director for Misys, the world’s banking goliaths are working on their own Glass apps, including Wells Fargo and BofA.

American Banker reported in August that Fidelity Investments is also toying around with a Google Glass app of its own.

Google Glass isn’t the only wearable rolling out in the banking sector. Westpac New Zealand is poised to release the first integrated mobile banking app for a SmartWatch device. The “Cash Tank” app will show wearers what their current account balance is at all times.

Key Questions: How much digital luggage do consumers really want to tote around all day? iPhone, iPad, Google Glass, SmartWatch…? How practical are Google Glass applications? Or are they just great story hooks used to generate free PR?

At a recent conference, Bradley Leimer, VP/Online & Mobile Banking at Mechanics Bank said banks need to determine if they want to be a leader, fast follower or a wait-and-see laggard — just like it is with any new technology or innovation.

“There are still a number banks that do not have mobile banking apps or resident tablet applications,” Leimer said. “Should these banks be considering looking at wearables when they haven’t developed the basics that customers want today? I don’t think so.”

Read More: US Bank’s Wearable Wallet: Will It Flop or Not?

When the session moderator, Sean Sposito, tech reporter for American Banker, asked attendees how many bankers in the room believed that wearables would have any impact on payments or banking in the next three years, not one person raised their hand. 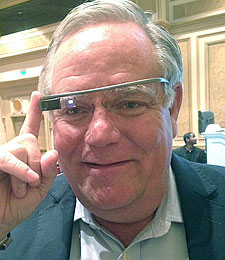 Jim Marous, SVP/Corporate Development at New Control and regular contributor to The Financial Brand, has actually tested Google Glass technology. He says the viewing screen on the device is substantially less obtrusive than what you would imagine.

“Without some prompt — such as a sound or tactile notification — you would not know that something is happening on the glass,” Marous explains.

Marous says the initial use of wearables in banking will most likely be limited to things like alerts, special offers, balance inquiries, real-time receipts and short-form PFM insights.

“Any wearable technology like Google Glass will almost certainly need to integrate voice commands into apps banks develop,” he adds. “Unlike a smartphone that is almost entirely tactile, wearable technology relies on voice recognition to be the most effective. This suggests that voice driven banking could expand significantly in the future as technologies like these are refined.”