Subscribe Now Get The Financial Brand's FREE Email Newsletter
An ATM in Spain dispenses free cash to folks under the condition that they do something generous with it. It sounds too good to be true, but it isn’t. It’s actually part of a savvy guerilla marketing ploy that went viral. Who was behind the stunt?
Subscribe Now! 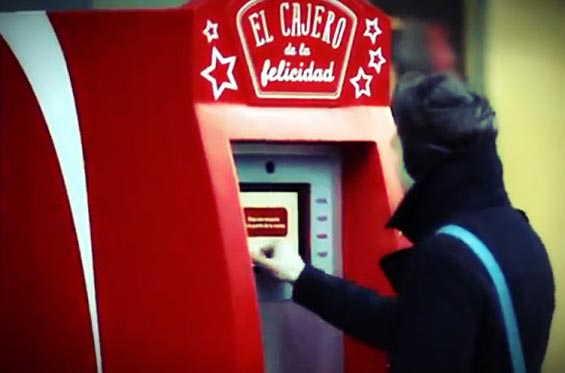 Coke, the world’s favorite purveyor of caramel-colored colas, fabricated a bunch of otherwise non-descript ATMs and dropped them in expected settings like malls. Nothing seemed out of the ordinary, and the machines offered no hints as to their real purpose: to generate free publicity for Coca Cola. Indeed the only clue that the ATM was in any way connected to Coke was the unit’s paint job — the brand’s signature trademark red.

As part of a wider their “Share Happiness” campaign, Coke called their concept “El Cajero de la Felicidad” (“The ATM of Happiness”), and put a simple offer on its screen:

Now 100 € isn’t chump change mind you. That’s about $131 USD at today’s exchange rate — maybe not enough money to change someone’s life, but certainly enough to make their day (or week, or even month).

The only catch: people had to use the money to “share their happiness” with someone else.

When someone stopped and clicked “Yes,” the ATM responded: “But only if you agree to share it.” Again, everyone would of course click “Yes.” Then the ATM asked if they needed any suggestions on how they might share their good fortune. According to Gizmodo, many people clicked “Yes” again, and the ATM would provide several options.

Coke says it didn’t track where all the money went, but plenty of lucky recipients followed through with the ATM’s suggestion and shared their newfound wealth. Some of these “random acts of happiness” were captured in a YouTube documentary on the project. One guy buys a tricycle for a kid and another guy gets basketballs for kids at a park.

The ATM as a Guerilla Weapon

This isn’t the first time ATMs have been used as the centerpiece of a guerrilla marketing stunt. For Christmas in 2008, Industrial Credit Union randomly swapped one hundred $20 bills with $50 notes in one of its ATMs. The credit union even sent out postcards announcing its plans in advance — smart. And during the holidays, everyone needs more cash (especially free cash!) — very smart. This relatively inexpensive gimmick helped drive a ton of traffic to the credit union’s brand new branch location.

And any financial institution could use this exact same idea at any location any time it wanted.

In 2006, TD Bank embarked on a massive guerilla campaign to build awareness of its no-fee ATMs. Bank employees cruised around in branded Honda Elements, handing out free coffees, popcorn with handy holders, phony newspapers, bottled water, and door hangers. They gave out water at a baseball game and ice cream on hot days. Everything was branded with stickers that read, “With the money you save from no ATM fees, you can get more of these.”

To help draw attention to the financial literacy problem in Peru, BBVA put a little guy inside their ATMs. Clever concept.

And Grabill Bank, a community bank in northeast Indiana, installed the ATM for a new branch location two months before the grand opening so their agency could cover it up with a big green “mystery” box. Many people were so intrigued they took pictures by it.

Reality Check: Guerrilla stunts are great for generating free press and consumer buzz, not sales (directly). Guerilla marketing is a somewhere between social experimentation and satire, which is best kept pure and unsoiled by tawdry “Buy More Now!” consumerism. If you try to make your guerilla marketing campaign about new accounts and new loans, it’s going to backfire.

A Powerful Psychological Ploy for Banks

The relationship between banks and consumers has always been a contentious one, but today’s milieu is particularly odious. There’s no denying it… Consumers are still pissed at banks, and generally believe financial institutions haven’t sufficiently been held accountable for the world’s current economic woes. In their view, banks have failed to express any contrition or remorse. Not even a little “Hey thanks” to taxpayers for keeping the entire financial industry from going belly up.

Maybe it’s not fair, but that’s the way consumers see it. Few industries could use more help with their image more than banking.

Now, what do most companies in most industries do when they have image problems? What do other companies do when they screw up and need to say they’re sorry? They give away free stuff — whatever they make or sell. When a cruise ship operator like Carnival “fouls” up, they had to give away free booze and trips; that’s their “inventory,” it’s what they “sell.”

And in other industries, companies looking to re-engage consumers will give away free samples — little “taste tests.”

Banks and credit unions are fortunate enough to have one “product” everyone wants: cold, hard cash. Giving it away completely contradicts consumer perceptions of financial institutions as cruel, selfish and greedy. Free samples are used to build goodwill in nearly every other industry, why not banking?

Key Question: Why don’t more financial institutions give away free samples from the vault?

Banks and credit unions like to talk a lot about creating “surprise and delight” moments — a “Wow!” experience. But takes more than free cookies in branches or free lollipops in the drive-through. If you want to make any discernible dent in consumers’ psyches, you’ve got to really rattle the cage.

Bottom Line: Dollar for dollar, investments in guerilla stunts yield more PR and word-of-mouth value than anything else in the marketers’ toolbox. Every bank and credit union should commit itself to trying at least one guerilla marketing project a year. Find ways to inject cash into your guerilla efforts and you’ll have a home run on your hands.

Here is a list of some good guerilla marketing concepts from retail financial institutions to help you get started: