Subscribe Now Get The Financial Brand's FREE Email Newsletter
Technology adoption at smaller financial institutions is speeding up. Under increasing competitive pressure from fintechs and other banks, many have boosted their tech budgets to add digital capabilities like account opening and to improve the experience of their online and mobile users, a survey shows.

Community banks have not kept pace with the rest of the industry on the technology front. But if their growing tech budgets are any indication, they have become more amenable to investing in innovation lately.

In an annual survey, Bank Director found that 81% of the respondents had boosted their 2022 tech budget, with the median increase being 11% from 2021. About 140 independent directors and C-suite leaders at U.S. banks with less than $100 billion assets participated in the survey. Roughly half of the respondents came from banks with under $1 billion in assets and 35% from banks with $1 billion to $5 billion in assets.

To maximize the impact of the extra spending, these executives typically zeroed in on where they thought it would help most, with many reporting a careful focus on digital capabilities that would improve customer experience and competitiveness of the bank.

Executives at eight in ten banks said their 2022 technology budget was up from the previous year, with an average increase of 11% over 2021.

“Community banks, with far fewer dollars to spend, have to budget wisely and invest where it makes the most sense,” Laura Alix, Bank Director’s director of research, wrote in the report. “For many, that means prioritizing new technology features and updates in areas like security or where customers frequently interact with the bank, like payments or digital loan applications.”

The survey pegged the median 2022 bank tech budget at $1 million.

Dig Deeper: The Shift to Cloud Technology in Banking Accelerates

This growing focus on technology and innovation is now “a matter of survival” for many community banks and credit unions, Zach Walker, credit union account executive at the fintech software company Total Expert, told The Financial Brand in an interview.

Digital account opening processes — available not just at fintechs, but on some websites for banks and credit unions — have made it easier for consumers to switch financial institutions, Walker says. As a result, executives at smaller financial institutions have become far more open than they have been in the past to trying new things.

“Community banks, with far fewer dollars to spend, have to budget wisely and invest where it makes the most sense.”
— Laura Alix, Bank Director

With digital transformation in mind, they are exploring new technology in payment transactions, faster loan approvals, and virtual branches.

The pandemic is another factor behind the tech surge. Virtually all financial institutions had to speed up their digital transformation in the early days of the lockdown. Smaller banks and credit unions in particular were often forced to digitize processes like account openings and loan applications for the first time.

Now they are looking to maintain the innovation momentum, focusing investments on technology that enables them to engage their customers across the entire lifecycle.

Bank Director’s survey asked respondents what types of tech their bank had upgraded or implemented over the past 18 months. (They could provide multiple answers.)

Cybersecurity was the most common technology cited, with 89% naming it as a critical area. Additionally, 81% said their bank is now using cloud technology to drive internal efficiencies, and 66% are using application programming interfaces, or APIs.

Customer experience (CX) ranked as a high priority over the past 18 months as well, with 63% of the banks upgrading payment capabilities and 54% enhancing digital account opening.

Digital functionality in general was a major focus, including consumer lending (41%), business lending (20%) and wealth management (11%). 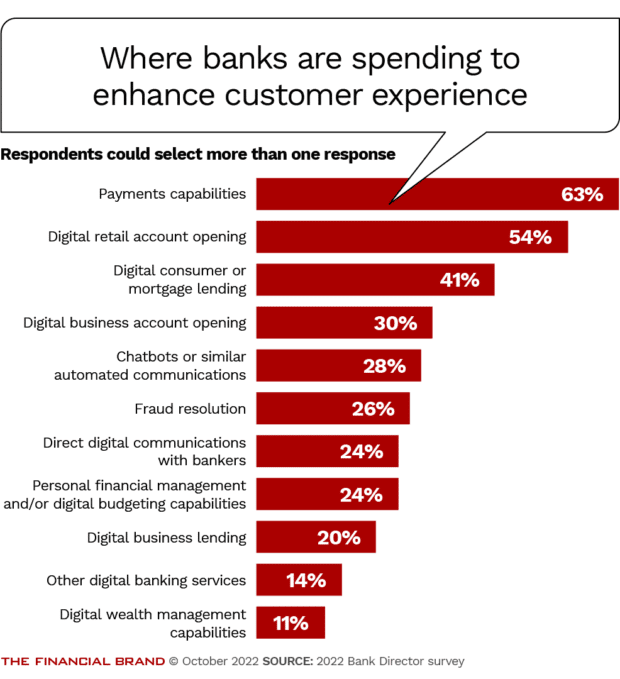 Banking executives said in the survey they were upgrading technology to compete with fintechs, but even so they’re more concerned about competition from each other.

Interestingly, asked to identify up to three of their top competitive threats, 56% of respondents cited local banks and credit unions, while 46% cited big banks and superregionals. Only a third said threats from tech companies like Apple and Google had them very worried.

That’s somewhat surprising, given that the tech giants have strong potential to lure away younger consumers, with products like Apple Pay and Google Pay providing an initial hook. 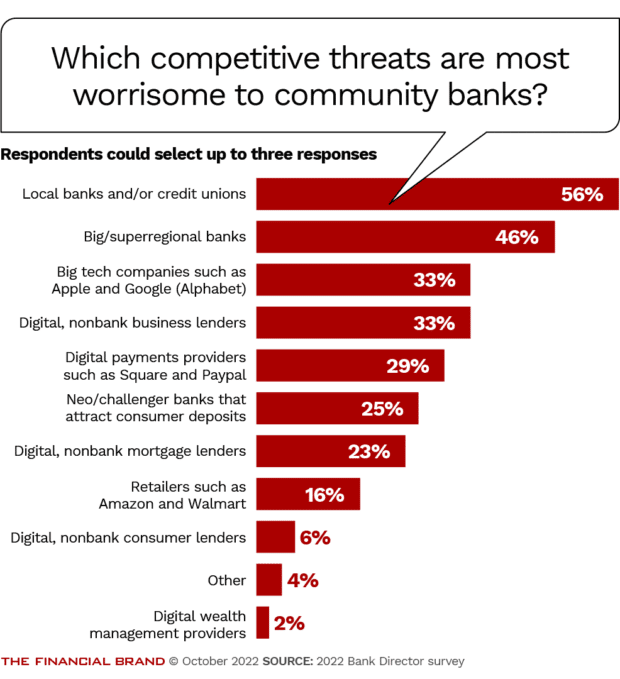 The community banks that have thrived in recent years often credit their success in part to new technology that helps them scale and expand their markets.

NBKC Bank — short for National Bank of Kansas City — was virtually unknown on a national scale a few years ago, but was named a Best Mortgage Lender for Online Loans in 2020 by NerdWallet. The bank (which markets itself as nbkc bank) has pursued a digital growth strategy that helped raise its profile and bring in customers from across the country, Drake Vidrine, senior vice president for commercial lending, says in an interview. To achieve this, it had to invest in technology and strike up some partnerships.

Initial tech projects focused on a clear objective: getting its mortgage and deposit operations digitized. The bank upgraded technology in document collection, disclosure delivery, e-signatures, and enablement of fast and easy delivery of funds, all capabilities that can enhance the overall user experience.

What nbkc learned from that process gave it an edge during the pandemic, Vidrine says. “During COVID, having some of the technology background from our experience in mortgage and deposit operations allowed us to stand out and process things much faster than some of our competitors.”

But what has really helped set the bank apart is being able to replicate its relationship-building skills in the digital space, he contends. “We still have employees who understand the importance of those relationships,” Vidrine says. “You can foster good relationships anywhere if you have the right people.”

Innovating Bank Tech Spending From the Outside

Most financial institutions represented in the Bank Director survey are looking outside of their own walls for help with technology adoption. Nearly 40%, primarily representing banks with more than $1 billion in assets, said they have collaborated with technology partners. Additionally, a quarter have participated in a venture fund that invests in technology companies, while 11% have directly invested in one or more of these companies.

Some community banks are even acquiring small fintechs to drive digital growth. For example, Horicon Bank acquired Monotto, a fintech dedicated to improving financial literacy and planning for Millennials.

Wisconsin-based Horicon made that investment to evolve its traditional community banking model, with the idea that it could use technology to translate its relationship-building skill into the digital space and gain a competitive advantage.

“Ultimately, technology isn’t a cost center. It’s a profit center,” says the bank’s former head of digital strategy, Christian Ruppe, who co-founded Monotto. “As soon as you start thinking of your investments like that – as soon as you change that conversation – then investing a little more in better technology makes a lot of sense.”

Other community banks and credit unions are looking to technology like marketing automation, which can more easily demonstrate a return on the investment.

A Shift in Focus:

Prioritizing is key in a community bank's limited budget. For many small institutions, onboarding and digital lending tools are getting the focus.

In one case, Total Expert had a customer that realized 50% higher engagement throughout the onboarding process after deploying marketing automation.

Because small institutions tend to have small budgets, they must be selective about which new technology to add. Many are focusing on projects that can directly drive revenue, according to Walker. These include digital account opening, along with digital lending and engagement tools, he says.

Nearly half of the banking executives in the Bank Director survey said their most significant concern is that their internal technology operation was not making effective use of existing data. They also worry to a similar degree about their team having an inadequate understanding of how emerging technology could impact the bank and about a reliance on outdated technology.

Leading banks are addressing such challenges by focusing more on tech talent and aligning their boards and C-suite, according to Alix.

“While directors aren’t involved in day-to-day decisions about the bank’s technology, the board needs to align technology with strategy to ensure that the bank has the resources it needs to achieve its goals,” she says.