Subscribe Now Get The Financial Brand's FREE Email Newsletter
BNZ utilizes state-of-the-art software to uncover consumers’ true financial feelings. The bank is using the technology as a clever gimmick to lure people into branches for consultations with financial advisors.

In a world‐first, BNZ has tapped advanced facial recognition software to help New Zealanders understand how they feel about their money. The online experience, dubbed EmotionScan, was developed by BNZ in partnership with Dr. Stuart Carr, Professor of Psychology at Massey University, and nViso, a Swiss company specializing in emotion recognition software.

It aims to highlight to New Zealanders the financial areas they are most comfortable with and which they might need to address.

Anyone with a computer, an internet connection and web camera can run an EmotionScan analysis on themselves.

The system will ask you a to envision a series of scenarios — what your dream home looks like, and whether or not you’ve got enough money socked away to handle a broken washing machine — while you stare into your webcam. The whole process takes exactly four minutes and 20 seconds. (If you’re wondering, yes… anyone can give this a whirl from anywhere around the whirl. You don’t need to register or fill out any forms. Start here, and in four more clicks of your mouse, you’ll be off and running.)

“Our technology tracks hundreds of points on the face,” explains Tim Llewellynn, COE of nViso. “We’re able to map those points to over 43 muscles, allowing us to capture micro-expressions and translate those into a set of common emotions.” 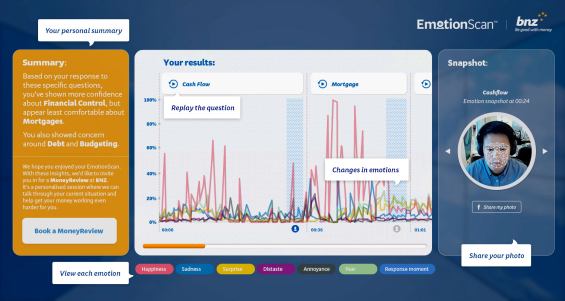 “They’re getting a bit of reflection back on the messages that their face is sending, which might not always line up exactly with the way their conscious thoughts are going,” Dr. Carr says. “So it’s a way of revealing other sides to ourselves that may be a little bit hidden sometimes.”

Facing Up to Your Financial Picture

“We think we’re rational about it, but we’re now recognizing that emotions influence our financial decisions more than we realize,” he says. “I think the big lesson of the past two or three decades has been that very often we make decisions around money on an emotional basis.”

Indeed. Back in 2008, The Financial Brand published an article on just this very subject — the psychology driving consumer decisions: “Human beings — as intelligent and sophisticated as we like to think we are — are actually highly emotional creatures. If you think about it and you’re really honest, what’s truly driving our choices is our emotions. Every decision we make is made for emotional reasons. Those are the real reasons. We then back-up those decisions with logical justifications — the ‘good reasons.”

This is the first time facial recognition has been used in a commercial context to gauge people’s emotional relationship to their financial situation. The software was initially developed to help with researching reactions to advertisements and new product development ideas.

“We know that only 9% of people strongly believe that they are competent at managing their finances so we wanted to provide them with a way of honestly assessing what areas of their financial planning they need to address,” explains BNZ’s chief marketing officer, Craig Herbison. “We think that if we can help New Zealanders to face up to how they really feel about money, then we can help to set them on track in addressing any areas they’re concerned about and putting them more in control of their money.”

After completing an EmotionScan analysis, Herbison hopes participants will pop into a BNZ branch to talk about the areas of their finances they are least comfortable with. And BNZ isn’t shy about asking people to set up appointments; there are buttons and forms everywhere throughout the EmotionScan microsite encouraging people to schedule a chat with a financial advisor.

“BNZ will collect aggregated results so we can determine what areas New Zealanders are comfortable with and concerned with as a group,” BNZ spokesman Thor Bostelmann said in an interview.