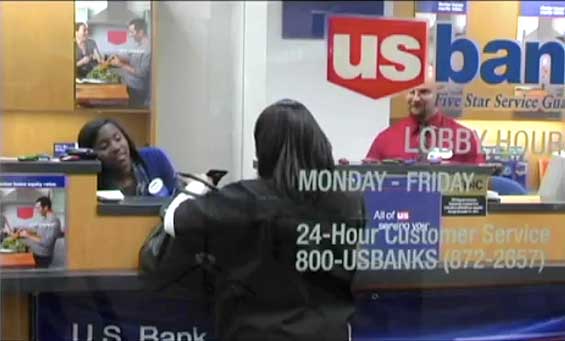 It might have something to do with the branches US Bank has built to serve the employees working on the campuses of those organizations. Through US Bank’s On-Site Banking program, some of the largest companies in America are able to offer financial services to their employees via on-campus branches.

The list of US Bank’s On-Site Banking clients reads like a who’s who of American business and higher education:

Reality Check: 50 years ago, the branches on these companies’ campuses would have all been credit unions, not banks.

Watch this six-minute video from US Bank, and you’d swear you’re hearing a strategy straight from the credit union playbook. In the video, US Bank outlines its On-Site Banking service, promising to customize everything from branch design and hours — even its products and services — for the employees of large companies.

A six-minute video overview of US Bank’s On-Site Banking service. “Having a US Bank On-Site branch on your campus, is a great benefit for your employees and a no-cost addition to your campus,” the video’s narrator says.

Today, credit unions are building branches for the mass public and expanding with community charters while mortal enemies like US Bank build branches in corporate HQs and factories. Irony?

“We created this new way of banking in 2005 when we considered the changing banking patterns of our current and future customers,” Richard Davis, Chairman/President & CEO of US Bancorp, says in the video.

Today, US Bank’s On-Site Banking has grown to more than 60 locations at corporate, health care and college campuses.

“What makes On-Site Banking unique is skill and scale,” says Rick Hartnack, Vice Chairman/Consumer Banking at US Bank. “We have developed the largest on-site banking operation in the country, and that scale has given us the ability to run this business better than anyone else.”

It’s unclear by what measure US Bank considers its On-Site Banking operations “the largest in the country” when there is Navy FCU with 3.5 million members, 179 branches and $40 billion in assets. And State Employees Credit Union with 1.5 million members and 225 branches.

Reality Check: US Bank touts On-Site Banking as an innovation, but “the only thing ‘innovative’ about this is that they spent a lot of money to make a video,” as Frank Rauscher says in a comment on BankInnovation.net.

Branch in, vending machines out

The most common concern US Bank hears from On-Site Banking prospects is “We don’t have enough space.”

“Every single partner we’ve worked with has had the exact same challenge,” says Daniel Hoke, Division Manager/US Bank On-Site Banking, in the video.

Hoke says US Bank customizes solutions for each unique situation. “We take into consideration the aesthetics and the limitations on the space itself, and we can come up with a creative solution to make the most of what’s available.”

In one location, US Bank completely gutted a space used for vending machines and squeezed a branch into it.

Tip of the Hat: Thanks to BankInnovation.net for finding the video.